Actress Amala Paul who had been on a soul searing quest for a while has returned to the industry with a new avatar as a producer. Her debut project Cadaver is an interesting way to open her account as a producer. The film is about a pathologist who tries to crack a complex case with her dexterity in necropsy along with a police commissioner. The actress who was last seen in Tamil in the anthology drama Kutty Story is back on screens with her police procedural thriller film Cadaver. Actor Harish Uthaman has essayed a vital role in the drama. Director Anoop Panicker has helmed the flick. So, how has the police procedural thriller Cadaver come out? Is it solid enough to establish actress Amala Paul as the bankable lead actress of Tamil cinema? To know that let us get into the movie review. 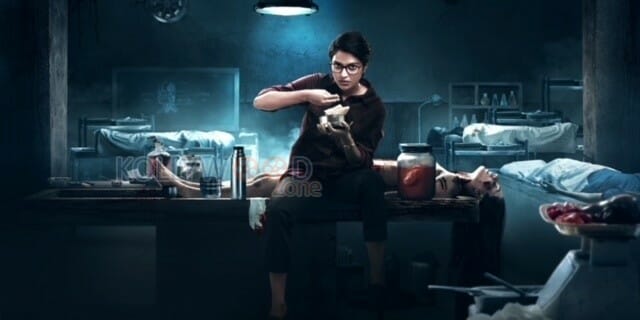 Cadaver opens with the murder of Salim Rahman, a chief surgeon of a reputed hospital. The murder brings ACP Vishal (Harish Uthaman) to the scene. After preliminary investigation the scene shifts to the hospital where Dr. Badra Thangavel (Amala Paul), a pathologist is seen helping ACP Vishal with the case. Then we are introduced to Vetri (Thrigun), a prisoner who has a grievance with Salim Rahman, and has publicly sworn to kill him. He even has a drawing of him on the wall of his prison cell. The news reaches ACP Vishal. He grills Vetri. Finds out there is another person in Vetri’s to-kill book. To the shock of ACP Vishal, Vetri succeeds in killing his second target despite being inside the prison. They assess the possibility of someone playing Vetri’s game on his behalf from the outside. Then the scene cuts to a flashback, where we witness the reason for Vetri’s aversion to Salim Rahman.

Following an accident, Vetri’s pregnant wife Angel (Athulya Ravi) is admitted to the hospital that Salim Rahman works in. Unfortunately, Angel passes away. Her autopsy is done by Salim Rahman. Badra suspects foul play, as to why would a heart surgeon do an autopsy for a patient who sustained an injury to the head. On further investigation, they find out that Angel’s heart is missing and that the post-mortem was never conducted in the first place. Suddenly ACP Vishal gets transferred. Are there any bigwigs behind the murders, did Vetri manage to kill them from being inside the prison, or else who did it, is what makes the rest of the flick.

Cadaver has a juicy plot to make for a fine crime thriller, and an exceptional team to get it done. But we cannot have it all, right? Something is supposed to be flawed. Here it is writer Abhilash Pillai’s writing that plays spoilsport. Director Anoop Panicker opens Cadaver in a formulaic fashion. He tries to capture the attention of the audience with a murder. The film moves at a brisk pace involving the investigation procedure throughout the first half. In the second half, director Anoop Panicker burns ample amount of time in setting up the backstory, and grinds at his own pace without any concrete stuff happening for a considerable portion. These scenes appear to be fluff content used to just fill the time cap. The characterization is so weak that we do not connect with any of the characters on screen. Hence, we sort of feel distant from the world of Cadaver.

The story of Cadaver is rather simple for the juicy plotline it has. It is writer Abhilash Pillai’s shot at the non-linear narrative that keeps the audience invested for the most parts. But the loopholes in the treatment do not do justice to all the good aspects of the flick. For instance, the grounds cited for Vetri’s incarceration look so lame and lethargic. As if throwing a reason at us just for the purpose of having one. There is too much convenience in tying and untying the knots. The ultimate twist which was supposed to make us go awe. Only makes us say, that’s it?

Actress Amala Paul has got under the skin of her character and has brought it to life. Yet again she ascertains her competence as a performer. Actor Harish Uthaman in his stereotypical cop part doing the same act he has been doing film after film. Actor Munishkanth makes his presence felt even in a restricted screen time. Actress Riythvika lives up to the purpose of why she was brought on board. Actress Athulya Ravi does justice to her role. Veteran actor Nizhalgal Ravi is functional. Actor Thrigun is adequate. Actor Velu Prabhakaran is effective as usual. Actor Ravi Prakash is operational. The rest of the cast has delivered what was asked of them.

On the technical front, music director Ranjin Raj’s songs are not inspiring. But his background score aids in fashioning the mystery pulse of the flick. Cinematographer S Aravind Singh has done a fine job covering the drama. His frames are rightly positioned to create the mystery element effectively. Editor San Lokesh has brought forth his prowess in his trade, and has complimented the work of his colleague well.

On the whole, actress Amala Paul’s Cadaver has an interesting line but banal writing sends it into the pool of films that got ruined by bad writing.

Cadaver is available for streaming on Netflix OTT platform.

It’s a Wrap For Silambarasan and Gautham Karthik’s Pathu Thala!