Like a chocolate that melts in our mouth, leaving us wanting for more, the flick starts and ends just like that. Without dragging, deciding to go with a crisp running time has paid off well. Does not matter in what mood you enter the theater, when you walk out, you are in a better mood. That is where the eminence of a film maker stands. Story teller Karthik Swaminathan’s such an attempt deserves to be lauded.

Another week, and another Vijay Sethupathi’s film on screens. The Annabelle Sethupathi star is almost churning out films like a slot machine that is locked on jackpot. Apart from performing he has even bankrolled this project. Mughizh is a special project for him as well, as he has shared the screen space with his daughter. Actor Vijay Sethupathi is known for taking the audience by surprise from time to time with non-linear flicks. Mughizh is one such drama that is set on exploring human connections and emotions. The actor who had a last month release in Annabelle Sethupathi is back on screens with his drama Mughizh. The recent releases of the star opened up to a lot of negative reviews. As a result, they did not fair in the box office. Will Mughizh garner positive reviews and put actor Vijay Sethupathi back on the winning horse? To know that let us get in to the movie review. 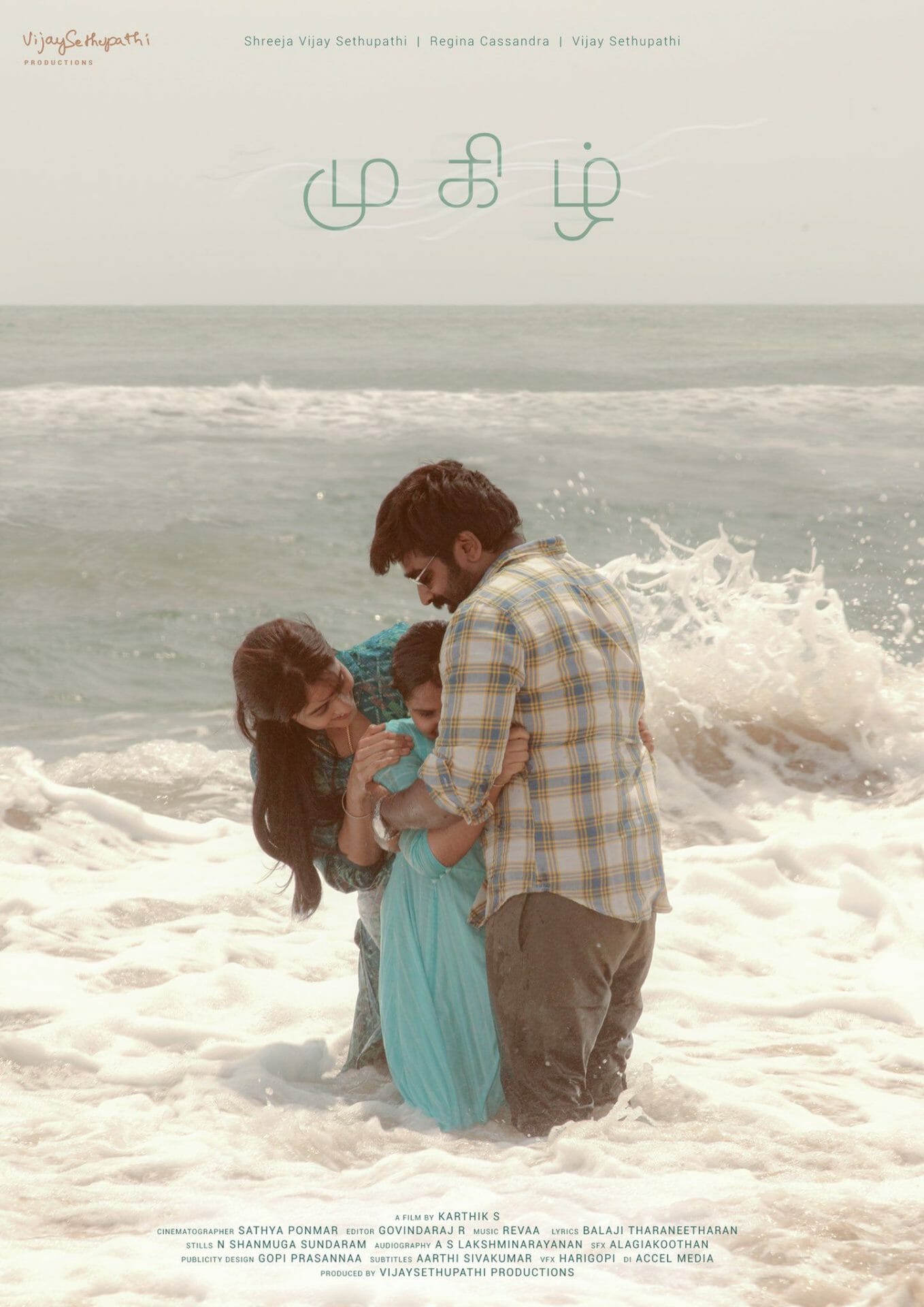 The film depicts the life events that happen in a family. When Mughizh opens, we see a small girl Kavya (Sreeja Vijay Sethupathi) taking a walk down the road with her parents Vijay (Vijay Sethupathi) and Radhika (Regina Cassandra). They come across a stray dog. Kavya gets scared seeing the dog. She clings on to her dad, and asks him to not take her close to him. Vijay who was unaware of his daughter’s feeling of comfortability with dogs, beckons the stray dog. Immediately, Kavya moves towards her mother’s side for safety. She becomes terrified when Vijay starts to pet the dog.

Learning about his daughter’s fear of dogs, Vijay decides to break that fear. He buys a puppy for his daughter. Initially, Kavya does not get along with him and is scared of him. But gradually she breaks her fear and begins to open up. In fact, she grows very close to him and they name him Scooby. In unfortunate turn of events, Scooby pass away. How Kavya deals with the death of Scooby, and how her parents help her understand that both love and grief are a part of life, is what makes the rest of the flick.

In many ways it is so rejuvenating to watch such a flick as Mughizh in Tamil cinema. For when was the last time you saw a film that realistically spoke of human emotions in Tamil cinema? And when was the one that explored a child’s emotion? In recent times we have two flicks in a short span with intend to explore the world of a child. Last month, we had Ashvamithra that depicted how a child recuperates from an unspeakable loss that she had to endure, with the help of an adult. This week we have Mughizh that is sort of build on that line. If Ashvamithra stressed the importance of an adult in a child’s life and the significance of a child in an adult’s life. Mughizh talks about the love and grief that a child process with the support of her parents. These are the plotlines that were overlooked in Kollywood for so long. Finally, films are being made on that line and there seem to be light at the end of the tunnel.

Director Karthik Swaminathan seem to be pretty clear about what he is doing and how he wants his film to be. This resonates evidently in his screenplay. His work is full of life. He has carefully written every scene as if shaping up his own child as a loving and responsible father. Both his dialogues and silence are equally meaningful. Sample this, after the demise of Scooby Kavya refuses to leave her room and talk to her parents. When her mother expresses her concern to Vijay, he calmly states, let her be, let her process her grief, we will just keep the door of the room open. She will come out when she feels so. Amidst love and grief there is a beautiful connection and understanding that is flourishing between the members of the family. Director Karthik Swaminathan captures this authentic magic without allowing his characters to get pretentious.

Like a chocolate that melts in our mouth, leaving us wanting for more, the flick starts and ends just like that. Without dragging, deciding to go with a crisp running time has paid off well. Does not matter in what mood you enter the theater, when you walk out, you are in a better mood. That is where the eminence of a film maker stands. Story teller Karthik Swaminathan’s such an attempt deserves to be lauded. And Vijay Sethupathi for an actor with a market valve not only choosing to fund a flick like Mughizh but also to star in it.

When it comes to playing this type of characters actor Vijay Sethupathi simply lives as the character. His performance in mughizh is not any different either. It is when he plays these kinds of roles actor Vijay Sethupathi enjoys himself and is at his best. And something that instilled admiration in us for the star. He should choose to do more such characters. Actress Regina Cassandra is superb as a mother. It would only be fair to say she is one of the most underrated actresses in the industry. Child artist Sreeja Vijay Sethupathi is a show stealer. In terms of performance, she is definitely going to give her father a run for his money if she should choose to pursue acting.

On the technical front, music director Revaa’s background score is soothing and adds strength to the entertainer. It helps in elevating the respective emotions in scenes to a whole different level. Cinematographer Sathya Ponmar’s frames have covered the drama without losing the pleasant feeling the film evokes. Editor R. Govindaraj’s scissor work has emphasized the work of his colleague well.

On the whole, in an industry that is swarmed with regular loud commercial movies, Mughizh is a pleasant experience and that alone should make it a watch worthy drama.