Tamil cinema was in decades of political satire drama dearth. But gradually the climate is beginning to change. Of late, there seems to be a shower of political satire dramas in k-town. It was Yogi Babu’s Mandela couple of months back, earlier this month it was Tughlaq Durbar which was slightly made in the political satire shade, and now we have Raame Aandalum Raavane Aandalum. Seems like there is a ray of light at the end of the tunnel. Actor Surya who takes an interest in producing socially responsible flicks has bankrolled the drama along with his wife and actress Jothika. Is the film solid enough to tempt the audience to stream it? To know that let us get in to the movie review. 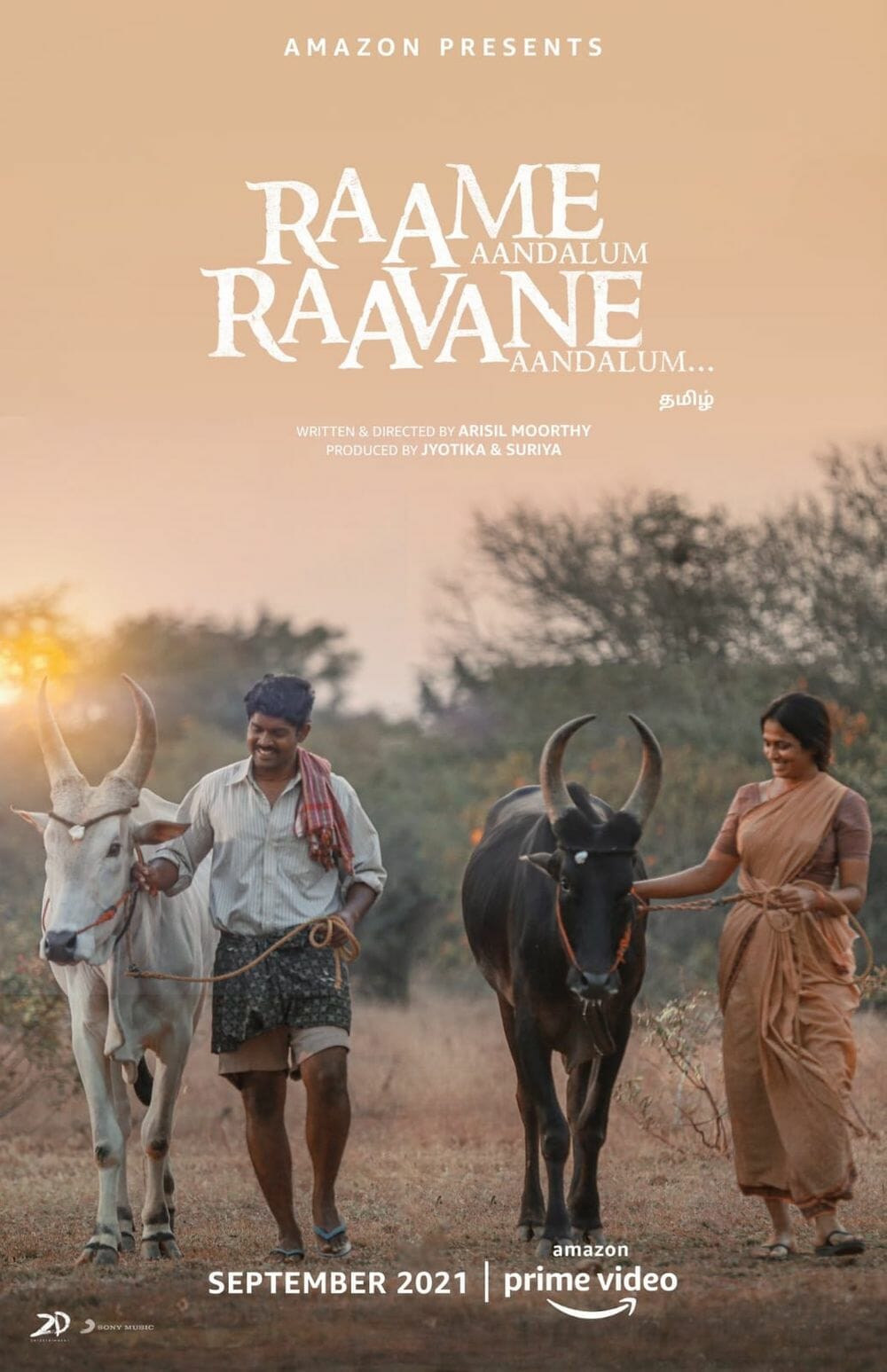 Raame Aandalum Raavane Aandalum follows the life of a couple from a humble background. Kunnimuthu (Mithun Manickam) and his wife Veerayi (Ramya Pandian) lead a content life even in a challenging environment. Their village Poocheri down south of Tamil Nadu has not seen any development for decades. The cunning and greedy politicians of the village have kept it so for their own political gains. The caste & class privilege are the weaponry they deploy to exploit the innocent villagers. The working class in the village barely make enough to make ends meet. Kunnimuthu and Veerayi suffer the same fate. Apart from them, they have two bulls or in their sense, kids named Karuppan and Vellaiyan to tend to. The reason for the dearness towards the bulls is because they were presented to them by Karuppan’s father for their wedding. Life moves smoothly until Kunnimuthu locks horn with a local politician.

Shortly after the rancorous incident with the politician, Kunnimuthu’s bulls go missing. Kunnimuthu and his friend Mannthinni (Kodangi Vadivel Murugan) search the entire village. When they could not find them anywhere, they decide to seek the help of the police. They attempt to file a complaint. But the police do not take them seriously. There class do not encourage them to act on their complaint with seriousness. Now Kunnimuthu has to deal with the insult thrown at him along with the loss of his bulls. When Kunnimuthu is left helpless in walks a journalist (Vani Bhojan) and the incident is blown out of proportion. It goes viral. Now the politicians hop in and roll their dice. What is behind the disappearance of Kunnimuthu’s bulls, will he get them back, is what makes the rest of the flick.

When it comes to making a flick on social issues – though we have almost every director of Tamil cinema trying to do that – very few film makers have the potential and clarity of what they want their films to do. In the future, director Arisil Moorthy could be a name to look for in that category. See how he names his film. Just the title gives away a clear picture of the essence on which his movie is built. Raame Aandalum Raavane Aandalum – it does not matter whether Rama rules or Ravana rules, we will always be neglected. A lash in the face of authority. His way of building a scene and penning razor-sharp dialogues resonates this robust message effectively. Sample this, when Kunnimuthu and his friend Mannthinni lodge complaint of their missing bulls, they are maltreated. But when a group of men lodge a complaint to find a missing dog of a politician, the men in khaki behave obsequiously. When this is the opening scene of a flick, you know you are in for something of substance.

Just as we anticipated the digs keep coming. Director Arisil Moorthy has used the contemporary political environment well to his advantage. The satire on it is enjoyable. But there is a major drawback with Raame Aandalum Raavane Aandalum. These satires and political commentary do not gel properly with the story. They seem to be like a cluster of WhatsApp forwards intertwined together to develop the story. The story is not gripping either. In a way the one line of Raame Aandalum Raavane Aandalum is similar to auteur Vetrimaaran’s film Polladhavan. There the protagonist goes in search of his bike, here we have the protagonist go in search of his bulls. The major difference between them is, the former had a gripping story and the latter does not. Hence the film misses the final piece of the jigsaw puzzle.

Actor Mithun Manickam is impressive. He fits the role of an innocent villager quite well. Actress Ramya Pandian received critical acclamations for her performance in Joker. She continues to prove time and time again what an amazing performer she can be with her terrific performances. Comedian Kodangi Vadivel Murugan seems like a good find for Tamil cinema. But he has a lot to work on before he can be entrusted as a solid comedian. Actress Vani Bhojan essays an extended cameo role. She is passable as a journalist. The rest of the cast has delivered what was asked of them.

On the technical front, singer turned music director Krish’s songs are middling while his background scores are better. Cinematographer M. Sukumar’s frames are adequate in covering the flick. Editor Shiva Saravanan has enhanced the work of his colleague with his sharp trims.

On the whole, Raame Aandalum Raavane Aandalum is a decent political satire flick that could have been solid with better writing.