There was a time when making it to the big screens had very much limited ways to take but with the rapid development of the social platform, especially YouTube has enabled many talented individuals to realize there dream of foraying in to the silver screens. Nenjamundu Nermaiyundu Odu Raja is one such attempt that is crafted by a famous YouTube channel team known as Black Sheep. It is no wonder why the film speaks of YouTubers. 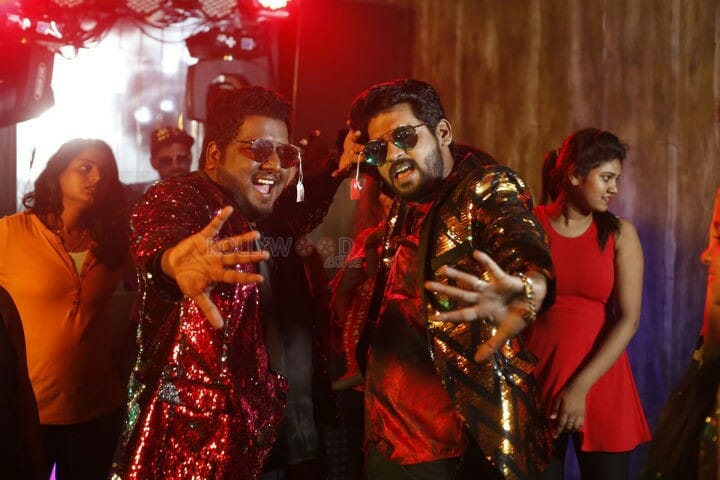 Shiva (Rio Raj) and Vicky (RJ Vigneshkanth) are two close buddies with a similar mindset and ambition to make more money to lead a luxurious life. They run a YouTube channel and are waiting for one big opportunity in life that could put them in to the league of riches. One day their paths happen to cross with that of a powerful businessman Jippakaran (Radha Ravi) when they attempt a prank on him. They get caught in the act and when he enquires about them they reveal why they did it and their ambition to him. With a plan to make use of their ambition in accordance to his favor, he promises to make them rich but under one condition. They must accomplish three errands that he allocates to them. Lured by the huge sum of money without any second thoughts they agree to the deal. What are those three jobs, the way they plan to carry them out, did they succeed in accomplishing them, is what makes the rest of the movie.

Rio Raj, even before the flick hit the screens there were so many emotional videos on the internet about his foray in to the silver screens, from his wife to his friends all expressed their emotions which set the commotion that is required for the film. Also, the success of Sivakarthikeyan’s first production venture Kanaa aided to set the anticipation level for the project at a high point. But to everyone’s disappointments the flick turns out to be a big downer in which Rio Raj delivers a normal performance as the script only demands that. RJ Vigneshkanth, is a big plus factor for the film without whom the audience would have felt more feeble. The only chemistry that seems to have worked well in the film is that of Rio Raj and RJ Vigneshkanth than Rio Raj and Shirin Kanchwala. As usual actor Radha Ravi has given what the director asked of him and politician turned actor Nanjil Sampath has put on a good show in the film.

The entire film gives you a feel like a cluster of YouTube spoof videos weaved together around the one liner ‘Two YouTubers who will do anything to get rich.’ So many strained and inert comedy scenes similar to that you get in the YouTube channel really test your patience. Though there are moments which make you laugh but the mood it created is ruined in the very next moment followed by an asinine joke.

Karthik Venugopalan, lets down a great offer bestowed on him with his lazy and insincere writing. It is also a valid point to consider whether the obligation to satisfy his YouTube audience has compelled him to pen a script as this.