Kuthiraivaal banks heavily on its cast and the artists have lived up to its expectations. Actor Kalaiyarasan has delivered a fantastic performance. He infuses life in to Saravanan and in process flaunts his acting prowess showcasing what kind of a performer he can be. Actress Anjali Patil has done justice to her role. Actor Chetan is effective. Actor Anandsami is functional. The rest of the cast has delivered what was asked of them.

The conversion of a story from one form to another is an intricate task. If it is an adaptation of a popular novel to a film, the process becomes stressful along with the intricacies. In the case of Kuthiraivaal, it is the metamorphosis of The Metamorphosis of Frank Kafka. One of the popular novels in the literary world. But just the concept though. Writer G. Rajesh has made efforts to give Tamil cinema a nonlinear film. Directors Manoj Leonel Jahson and Shyam Sunder have backed his mission. The film comes out from the Neelam Productions of director Pa. Ranjith and Vignesh Sundaresan’s Yaazhi Films. So, how has the flick come out? Will it aid actor Kalaiyarasan to earn the image of a bankable lead hero in Tamil cinema? To know that let us get in to the movie review. 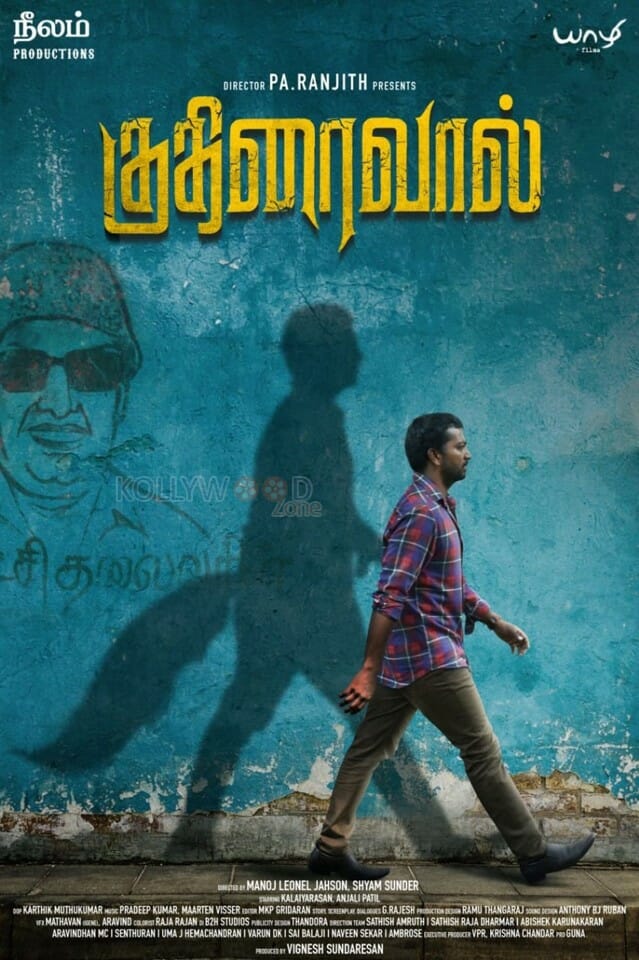 The film follows the life of Saravanan (Kalaiyarasan), who leads a reclusive life in an apartment with his chain of thoughts. He is a character who enjoys a sip of his scotch before leaving for work. If fact, two of his favorite things in life are ‘booze’ and ‘cigars.’ He is employed as a teller in a bank. But he hates his job. The monotonous nature of life is too much for him to bear. He calls himself as a Freud model and spends most of his time contemplating the meaning and purpose of his existence. Saravanan’s universe has a limited set of characters. He has a character Vaanavil or Vincent Van Gogh (Anjali Patil) mostly beside him talking things. Sometimes he exchanges words with his neighbor Babu (Chetan), a capricious man who lives alone with his dog.

One fine night Saravanan goes to bed, and wakes up the next morning to find himself with a horse tail grown on his back. He is perplexed. Lighting up cigar after cigar he tries to figure out what has happened to him. He is worried, is it just him who is seeing the tail, or could everyone else see it. Then the eventual question pops, how could he go to work with a horse tail? He sets up on a journey to find the reason for the growth of the tail. He seeks the help of a woman who presents him a theory. But not convinced of it, Saravanan goes to his professor looking for answers. He directs him to mathematics. Is mathematics the answer to Saravanan’s search, or will he ever find one on his journey, is what makes the rest of the movie.

In an industry, were the core belief that commercial elements are the USP of a film, is hard to break, a flick like Kuthiraivaal is just like the theme that the drama represents – surreal. If you had had the chance to read Frank Kafka’s novel The Metamorphosis where the protagonist Gregor Samsa wakes up to be a vermin in the very opening chapter, you might have had a dilemma as to whether is it a dream from which he would be woken up in one of the following chapters. But as we read further, we realize, it is we who are in the dream we call pragmatism and what happened to Gregor Samsa is not. Along with this concept from the novel, writer G. Rajesh has even put this element to a fine use. Since even Saravanan grows a horse tail overnight there is a line of contemplation happening constantly at the back of our head, is Saravanan having a dream and are we merely experiencing his dream? As Kuthiraivaal unfolds we get the answer to it, or do we? That is left up to what we seek in Kuthiraivaal.

When Kuthiraivaal opens and depicts us with events with no logic, a chronological order to the narrative, and the characters being a distinct world of themselves, we find it difficult to process the proceedings and refuse to get along the ride that the film intends to take us on. But after a certain point this analytical view of us seem to tire us and we switch off the analytical part that is trying to make sense of what is going on and rather slide back on to our seats to just experience what Saravanan is experiencing. At this moment is where Kuthiraivaal begins and we as an audience relish it, as we would, walking through an art gallery from one painting to another.

Kuthiraivaal banks heavily on its cast and the artists have lived up to its expectations. Actor Kalaiyarasan has delivered a fantastic performance. He infuses life in to Saravanan and in process flaunts his acting prowess showcasing what kind of a performer he can be. Actress Anjali Patil has done justice to her role. Actor Chetan is effective. Actor Anandsami is functional. The rest of the cast has delivered what was asked of them.

On the technical front, musician Pradeep Kumar’s music lifts the drama to a different level. His tracks are inspiring. His background score compliments the tone of the film quite well. Cinematographer Karthik Muthukumar has covered the drama from all best possible angles capturing the mood and chaos the character undergoes. Editor Gridaran MKP has done a wonderful job of enhancing the work of his colleague with his neat cuts.

On the whole, Kuthiraivaal might not be a drama for everyone, no drama is, but sure it is an important arrival in Tamil cinema.