Vishal has got all the spot light ever since he won the Nadigar sangam elections. He also keeps his professional life on front. Right from ‘Aambala’ he is spot on. Whenever he goes to shooting he fixes the release date too. ‘Kathakali’ has also been released exactly as promised. Catherine Tresa does the female lead role. This project is funded by Vishal Film Factory banner and Pasanga productions. Music is scored by Hip Hop Tamizha Aadhi. Pandiraj himself has written the story and screenplay. The movie is said to be based on a true story. The movie is related to ‘Thadayara Thaaka’. A simple narration with an extra ordinary tight and gripping screenplay. Pandiraj has came out of the box and has provided a massive hit for Vishal. 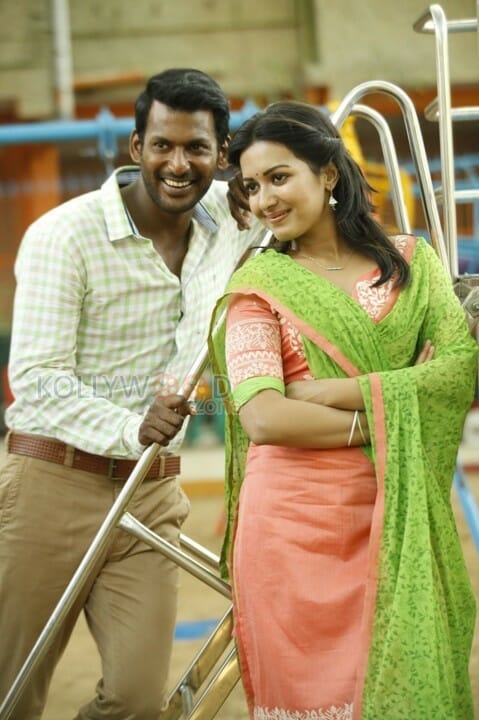 Vishal has clearly found his niche as a commercial actor. His action roles are so perfect. He is also executing flawless and beautiful fight choreographies. In ‘Kathakali’, the movie definitely has style, bucket loads of it. The fight scenes are phenomenally well-shot, well-choreographed and well-executed. Especially the first few. The film also manages to build nice tempo. Catherine Tresa is gorgeous and she fits the bill. But the film falters a bit is the cast of characters. From the opening scenes, the clichés come right to us without any denial.

The second half has zero songs and what is the necessity to keep two songs in first half? Pandiraj has stayed away from separate comedy track to provide the rush and adrenaline till the end. But at times, few scenes pull the movie down. The movie is fun filled action movie with 80’s screenplay. An old school action with no shaky cam. Hip-Hop Aadhi has failed to deliver the goods. Thankfully he has just worked on two songs.

Balasubramaniem’s camera catches the night time so beautifully. At times the darkness is also bright through his lens. The The stunts are completely insane in scale. Apart from action, the movie also has beautiful romance. At the same time the movie has empty substance. The movie solely relies on the main actor and there are lots of random violence.

Overall, Kathakali is watchable for the action scenes.