Director Bala was last seen in ‘Paradesi’. That movie spoke about how rich people exploit poor people’s needs. The movie fetched National Award and earned the director a good name. After a brief hiatus he is now back again with the project ‘Thaarai Thappatai’. Maestro Ilayaraja has scored tunes and this is his 1000th movie. Director Sasikumar and Varalakshmi Sarathkumar have done lead roles. Studio 9 company R.K.Suresh has done role of antagonist. Bala’s regular technical team comprising of Chezhiyan and G.Sasikumar are back again. Once again Bala has handled an unique genre with a touch of sensitive script. 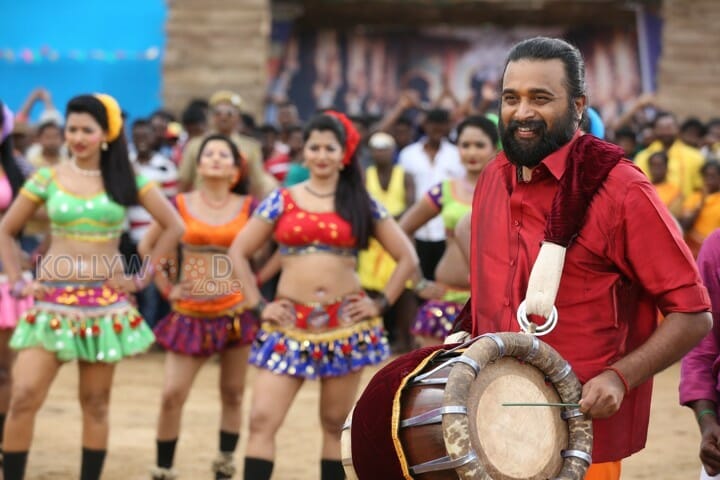 This is a typical Bala movie for all walks of life, for all ages. You smile at times, you cry at times. You know you’re watching something too deep, but at the same time you really like the characters and care for them. The typical Bala stamp thrown all over. Sasikumar as Nadaswaram Player and Varalaxmi Sarathkumar as Karagam dancer has produced matured performances. They were just outstanding. The story works best when it focuses on the two lead characters rehearsing and dancing together.

But the story loses steam when it shifts to gore and violence. There is also a tragic scene that takes place near the end of the film. Bala seems to go with his usual routine. The movie has perfect combination of all emotions. Typical Bala cliches is what pulls the movie down. But we need one such director to give those movies. The movie has managed to entertain us despite its flaws here and there. R.K.Suresh is a welcome villain in Kollywood. He is abominable and ruthless. Bala’s villain often have unique identity and he has given one such to R.K.Suresh. Even though the lead actors are less than ten movies old, they have given matured performances. All thanks to Director Bala. here are some moments where you think the story could have been a lot better if they had worked on key points.

The cast is really good and the main characters are so blended with the roles which they have been provide. The movie also has some heart wrenching scenes. Cheziyan’s cinematography catches the beauty of dancers with some vibrant colours. The frames are kept simple and they catch the elegant scenary. Editing is another big positive aspect. Running time is placed under radar. Ilayaraja’s music is just beyond words. On the flip side side, the predictable screenplay and Bala’s gore mind spoils the party.

Overall, Thaarai Thappatai is watchable if you can tolerate the gore and violence.