Kadavul Irukkaan Kumaru (KIK) is a romantic comedy movie starring GV Prakash, Nikki Galrani, Anandhi, Prakash Raj and others. The lead actors have done a good job with the heroines upping the glamour quotient. Overall, a tried and tested formula that fails to win big for GV.

Kadavul Irukaan Kumaru is a Tamil romantic comedy movie which was written and directed by M. Rajesh and on behalf of Amma Creations T Siva has produced the movie. The movie features GV Prakash, Nikki Galrani, Aanandhi and RJ Balaji have acted in lead roles. The music was composed by GV Prakash himself. The cinematography work was played by Sakthi Saravanan and the editing part was done by Vivek Harshan. 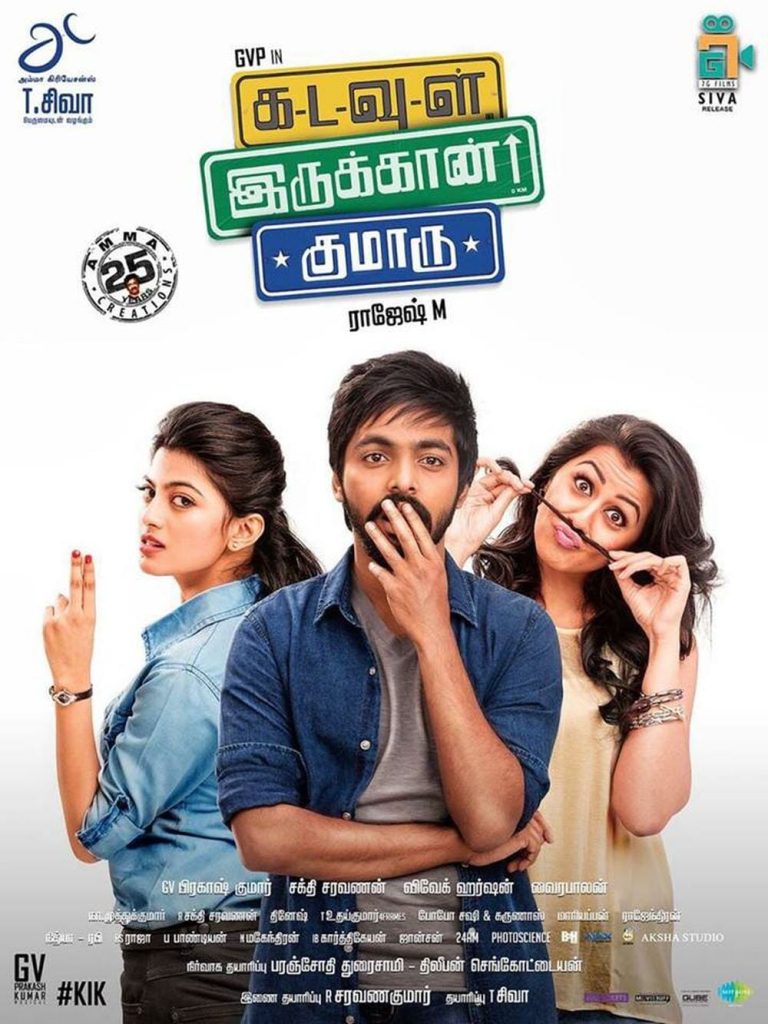 Actors like Prakash Raj, Thambi Ramaiah, Rajendran, Manobala, Robo Shankar, Singampuli, and Urvashi have acted in supporting roles for Kadavul Irukaan Kumaru. ‘Iravinil Aattam’ and ‘Locality Boys’ songs from the Tamil flick have become hits. Kadavul Irukaan Kumaru is a road movie that takes off in Chennai and moves on to Goa and Pondicherry.

The story revolves around Kumaru (GV Prakash) who goes on a road trip to Pondicherry, to celebrate his last 2 days of his bachelor life, with his reckless friend Balaji (RJ Balaji) just two days before his wedding with Priya (Nikki Galrani).

While returning from Pondicherry, Balaji stashes some liquor bottles in the car and they are stopped by cops at a checkpoint. That’s when things go out of control and the rest of the movie is how Kumaru struggles to reach Chennai with his friend.

The movie is predictable and filled with monotonous jokes. It alternates between Kumaru’s present and past life when he was in a relationship with Nancy (Anandhi). Their love is cut short due to Nancy’s father (MS Bhaskar) asking Kumaru and his family to convert to Christianity so he can marry Nancy. Despite desperate measures, he fails to save his love and later moves on with his life.

The director has tried to milk his tried and tested formula to help GV win big at the box office. Given that there are no other movies this week, if you are really bored, you can watch this else you are not missing anything.

Usually GV Prakash has good fan base for his style of acting. Aanandhi and Nikki Galrani are pairing with his for the third and second time. Both have acted to the fullest satisfaction of the audiences. The trailer had received good response for GV’s fans. He has attracted more fan base for his adult comedy scenes and many were anticipating the release of the movie for over a long period. The movie was postponed on account of currency issue. The directors expect good collections for the movie and watch a romantic comedy movie this weekend.