There are film makers who do not concern themselves about the censor board much but make films within the limitations set by the board. Then there are film makers who do not give a damn about the censor board and in fact make films for ‘A’ certification. It seems, story teller Arun Matheswaran belongs to the latter category. That is what his sophomore flick Saani Kaayidham seems to say. Actress Keerthy Suresh who was last seen on screens in Annaatthe is back on small screens with her drama Saani Kaayidham. Actor Selvaraghavan has essayed a crucial role in the film. So, how has the flick come out? Is it solid, or perhaps violent enough to the level of Rocky to upkeep director Arun Matheswaran’s reputation, and will it add another feather to actress Keerthy Suresh’s acting hat? To know that let us get into the movie review. 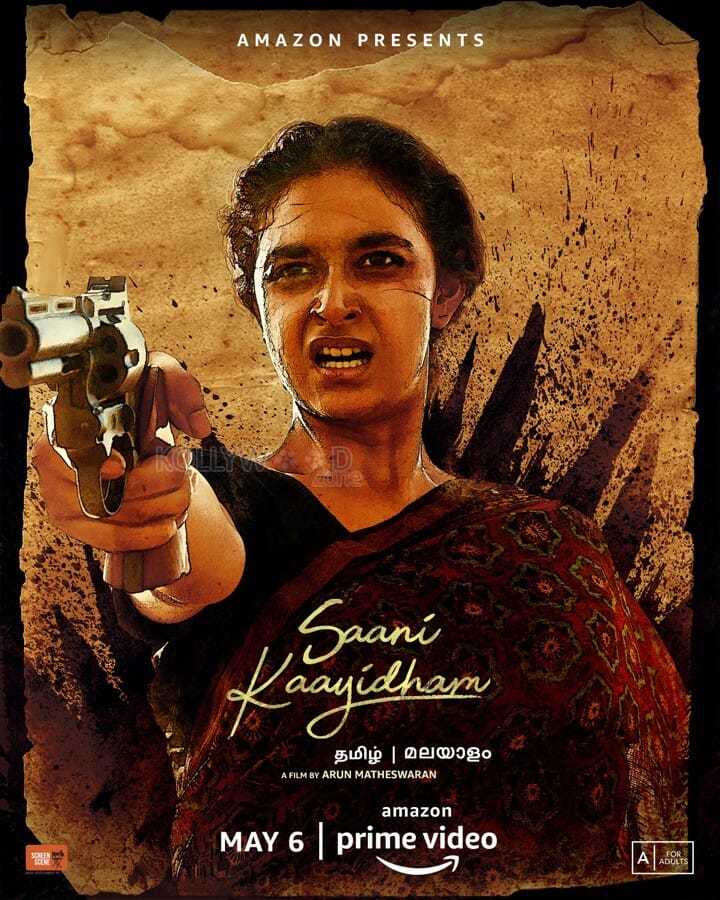 The movie follows the life of Ponni (Keerthy Suresh), an ordinary woman who makes her living by working as a police constable. Saani Kaayidham opens at Paradesapattinam in the 1990’s, we witness Sangaiyyah (Selvaraghavan), in a dilapidated building by the side of a window gazing at the sea patiently waiting amidst an unsettling yowling of a woman being subjected to torment. Unlike our regular dramas, it is not a man who is inflicting the torture. It is a woman – the protagonist of Saani Kaayidham ‘Ponni.’ She walks up to Sangaiyyah, hands him a list of people’s names and casually tells him she has the whereabouts of the people who are their subsequent targets. They go into the room where the injured woman is, and Ponni asks Sangaiyyah not to kill her as she intends to burn her alive. She leaves to get a can of kerosene from the van. With a great sense of unwavering calmness Ponni does her job. Sangaiyyah and Ponni set out on their journey to find their next targets.

As the film progresses, we are shown the reason behind the rage of Ponni. Ponni’s husband Maari (Kanna Ravi), a mill worker from an underprivileged caste seeks to take part in elections. His ambition does not provoke a good reaction among the so-called upper caste men. The people who call the shots in the town. They mock and humiliate him. Maari retorts. And that embarrasses them. They get drunk. The barbarous nature of them takes over. They go to Maari’s home and hack him and his daughter to death. They rape Ponni but leave her alive disregarding her thinking what could a woman after all do to them. But that woman along with the assistance of her half-brother Sangaiyyah goes after every single one of them who unleashed such a ruthless act on her and her family and makes them pay. Will Ponni and Sangaiyyah be able to complete their mission, and how callous do the murders get, is what makes the rest of the entertainer.

Director Arun Matheswaran’s Saani Kaayidham is a master class on, in how many ways can we pitilessly slay a person to death. Director Arun Matheswaran seems to be on a mission to acquire a trademark in violence as a filmmaker. He picks up from where he left off in his previous venture Rocky. Unlike Rocky, the director wastes no time in establishing the violent nature of his character. In a way he gives away pretty much a lot about his lead character in the very opening scene. After the gruesome act that opens the film, naturally we are left with wanting to know what lies behind such rage. Story teller Arun Matheswaran smartly reveals the kind and humane side of his characters before they go about their mission getting us to root for their vengeance.

Saani Kaayidham is a simple violent revenge story. But it is the manner in which Ponni and Sangaiyyah are written that makes all the difference. And yes, the way in which it is presented. However, while it is refreshing to see a woman character extracting her revenge on her own, the violence does not seem convincing. But rather contrived. As the film progresses, we get used to the gruesome violence. The level of serenity with which violence is perpetrated does not work after that point. Saani Kaayidham gradually starts to lose steam from there. Like Rocky, Saani Kaayidham does not have peculiar characters. Director Arun Matheswaran’s attempt to move the film with just the two characters for the most parts, dearth of a powerful antagonist, deprives the film from being a gripping drama.

Actress Keerthy Suresh is remarkable as Ponni. She has yet again stood up to a challenging role and has delivered a stellar performance. She cakewalks a wide range of emotions, agony, rage, trauma, and numbness that drive her character Ponni effortlessly. Another accolade on her way? Actor Selvaraghavan is equally impressive. He not only has gotten into the skin of his character but imbues it with an inimitable aura that elevates the character to a whole different level. Actor Kanna Ravi is functional. Actress Lizzie Antony is adequate. The rest of the cast has delivered what was asked of them.

On the technical front, the film is delightfully strong technically. Music director Sam CS aids in amplifying the emotions in the scenes with his intense and soothing background score. Cinematographer Yamini Yagnamurthy has done a fantastic job covering the movie. She has sited her camera at creative vantage points to get exceptional visuals. Editor Nagooran Ramachandran has backed the work of his colleague with his fine scissor work.

On the whole, Saani Kaayidham belongs more to actress Keerthy Suresh and cinematographer Yamini Yagnamurthy than to director Arun Matheswaran himself.