It is the week of professional outing for the rumored to be couples Jai and Anjali. While jai had his Neeya 2 hit the screens this weekend, it was Lisaa for Anjali. In the contest of best of the worst, actress Anjali’s Lisaa seems to have outdone actor Jai’s Neeya 2. It was quite difficult to come to a conclusion as to whether the writing has let the film down or the lack of one has. 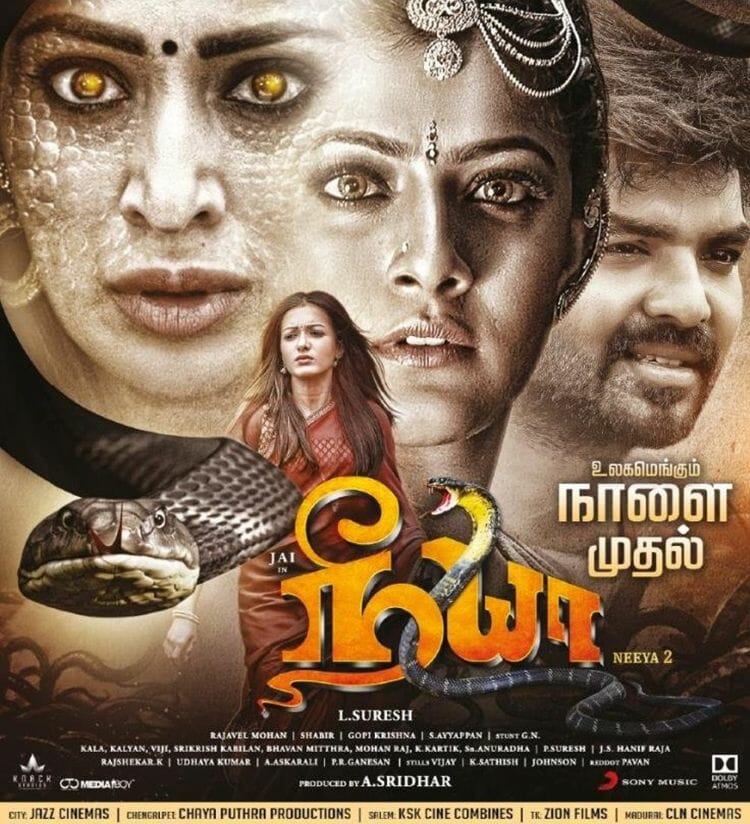 The idea of calling the film sequel to the 1979 film Neeya seems to be strange and surprising, as there are only two connections between the prequel and sequel, one being the Ore Jeevan song and the other the concept of serpent woman. Other than this the film has no sort of connection or whatsoever with the 1979 released film Neeya. All we can make out of the film at the end are the three words Vidhi, Jaadhagam and Parihaaram as we have a lecture session in the middle of the film conducted by an individual who comes in the disguise of priest. You feel helpless and pathetic when the priest says one cannot understand Vidhi as it can only be experienced, after a long lecture session.

Vikram (Jai), a young man for a change plays a role reversal character of a man walking away from a woman without reciprocating to the love torment that Divya (Catherine Tresa) put him through. Divya stalks Vikram untiringly and when he still refrains from reciprocating her love she jokingly says that she will orchestra an acid attack on him. Really wonder how one was supposed to take it, a serious joke? Well back in to the plot, on the other hand we have Malar (Raai Laxmi) with a claim that she was married to Vikram in his previous birth. Malar turns in to a snake when the sun sets, not two or three feet serpent but a solid 20 feet serpent. From this point it is all about the two pretty ladies throwing themselves at Vikram to make him theirs. Divya successfully convinces Vikram to marry her and now, yes you got it, Malar wants revenge she wants to take back what was once hers, like some registered property on her name. Will she get Vikram back or is Divya going to keep him forever, is what makes the rest of the story.

Jai, Raai Laxmi, Catherine Tresa, seems to have made themselves a laughingstock for the meme creators and trolls, who are definitely going to have a busy time thinking of different ways to troll the film. Varalaxmi Sarathkumar adds further more fun to the script with her expressions which leaves you helpless but to laugh aloud at very serious moments of the film. Two ladies just throwing themselves at a man, at a point gets to the stage where we intolerably pronounce the sentence ‘Seriously, are we a joke to you?’

On the whole, Neeya 2 makes you crawl out of theaters with the serpents not only hissing on the screens but also all over you. It does not matter how much you read about it, you will not be able to truly understand the effect of the film until you experience it. May be putting the film under the tag of parody of Neeya might have helped the film, but you know what it does not matter.