Amala Paul who turned the attention of audience towards her with her performance in the adult film Sindhu Samaveli faced a lot of heat for the portrayal of her controversial character Sundari. But later on she received critical acclamations for her role in the minimalistic super hit flick Mynaa. Later on when she was working on director A. L. Vijay’s directorial Deiva Thirumagal the duo fell in love with each other and got married in the year 2014. To everyone’s surprise the couple applied for divorce just after two years of living together. In the year 2017 the duo was officially divorced. 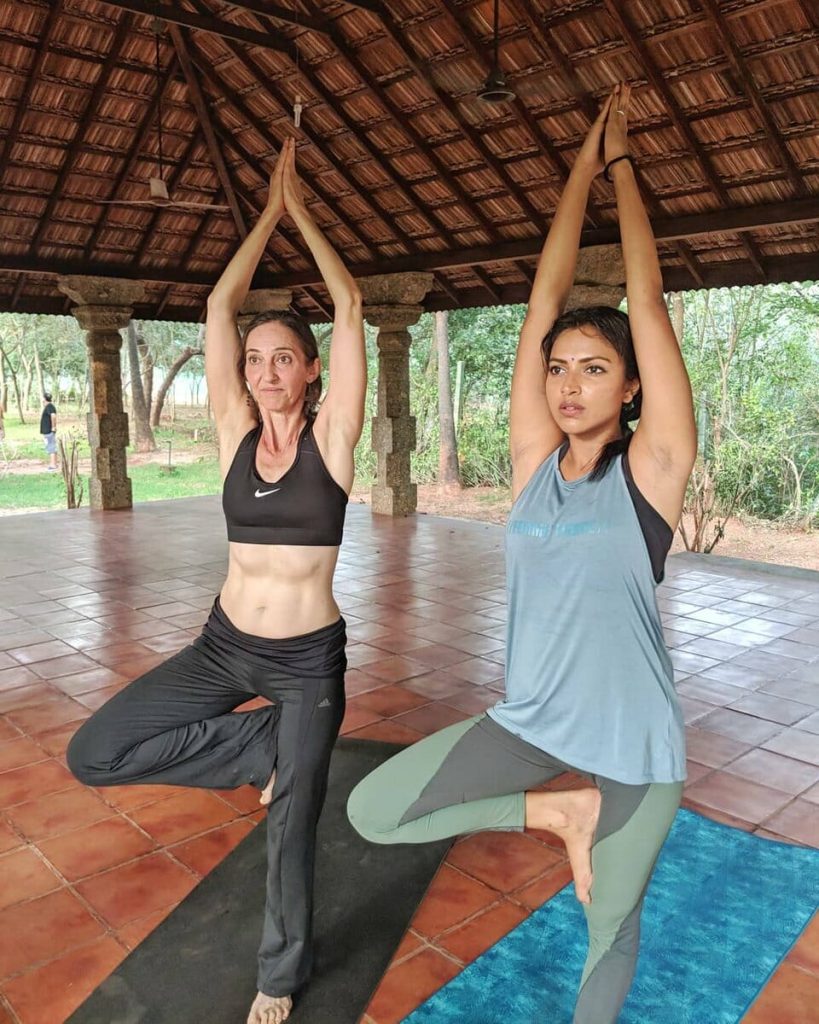 After facing so many hardships in life at a very young age, speaking on how she deals with it, the actress once stated in an interview that yoga helped her to rediscover her true self. She also stated that she is an unofficial brand ambassador of yoga and she would recommend yoga to all people to find inner peace as well as to stay healthy. The actress after her divorce regularly treats youngsters in the state by posting some temperature raising photos from her photo shoots, on her social media accounts. The actress has now shared a picture of her doing yoga with her guru, believe us when we say that she has got some serious yoga poses in her books. She also encouraged her followers to take up yoga by saying ‘Put your hands up in air and say Namaste.’ The actress who pulls of some serious bone bending yoga poses, at times chose to go with some hot yoga moves to keep her social media account buzzing.

It is a healthy thing when actors promote and suggest their followers to take up good things in life. We hope the actress keeps up her good work and adds more yoga poses to her book. The actress was last seen in the super hit block buster Tamil flick Ratsasan in which she romanced actor Vishnu Vishal. The success of the film has ensured to make her kitty over flow with film projects.

On the work front, the actress will next be seen on screens in the women centric action thriller film Adho Andha Paravai Pola which will be directed by Vinoth K. R. The film also has actors Ashish Vidyarthi and Samir Kochhar in pivotal roles. Apart from the flick the actress has Aadai which will hit the screens under the directorial of director Rathna Kumar. Even Aadai will be women centric film, the first look of the film created a huge controversy as Amala Paul was seen crying and bleeding with torn cloths in the poster. The actress is also set to venture in to production this year by producing the Malayalam film Cadavar in which she will be seen in the lead role.