Actor Bobby Simha was last seen on screens in the film Agni vs. Devi which went under a peculiar controversy in the history of Tamil cinema. Just after shooting for first four days the actor backed out of the film and later filed a police complaint that the film unit is shooting the film with a body dupe technique and are planning to use VFX to make it look like him. After a lot of controversies and barriers the film hit the screens only to fail miserably in the box office. The actor’s market has taken a huge dent after his back to back flop flicks and he is in need of a hit to reestablish himself as an actor with market in the industry.

At this time, a long delayed project of the actor is currently gearing up for the release and it happens to be Vallavanukkum Vallavan. Touted to be a crime comedy, the film will have actor Bobby Simha in the role of a con man. Finally finishing up the post production works the film was recently sent to the censor board for censor certification. Now we have reports that the censor board has given a clean U certificate for the film. The film is expected to hit the screens any time soon. We will have to wait to see whether Vallavanukkum Vallavan replicates the success that the Karthik Subbaraj’s directorial Jigarthanda gave him. 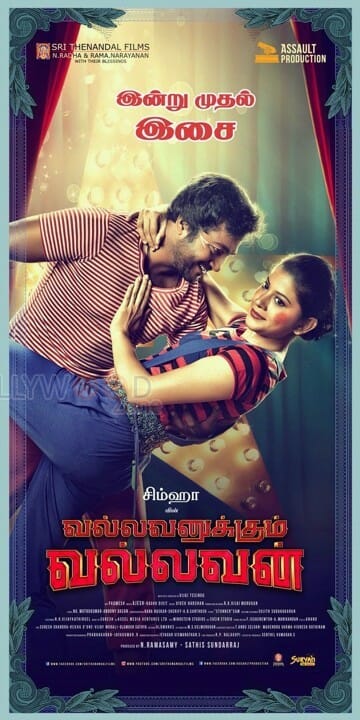 The film is penned down by the veteran comedy artist and writer Crazy Mohan and directed by Soothu Kaavum fame director Nalan Kumarasamy. Apart from actor Bobby Simha, the film has a long list of artists including Sshivada, Pooja Devariya, Napoleon, Karunakaran, Anandaraj, Delhi Ganesh, and Soori. Actor Vijay Sethupathi is said to have made a cameo appearance in the film. The Sachin and Jigar duo has composed the music for the film. While Gopi Amarnath has cranked the camera for the film, Anthony L. Ruben will be trimming the film. The film is bankrolled by the actor himself under his home banner Assault Production partnering with Thenandal Studios.

On the work front, the actor is busy shooting for his film Seerum Puli which will be the biopic of late Tamil leader of LTTE Velu Prabhakaran, who was known as the guardian of Tamil people in Sri Lanka. The film has also crossed many barriers to go on floors. Currently, this film is the only hope that the actor has to consolidate his place as an actor in the Tamil cinema industry.