The mechanical engineer turned actor karthi got the attention of the Tamil audience in his very first film Paruthiveeran not just because of the back ground that he comes from but also with his outstanding performance as Paruthiveeran. He further proved his acting ability in his next historical fantasy flick Aayirathil Oruvan. Though the film failed commercially in the box office he received critical acclamation for his role from the audience as well as the critics in the industry.

The actor’s last outing with the flick Dev turned out to be a miserable failure which left the theaters as an unnoticed flick. The actor who is in a need to reinstate his winning form is now gearing up for the release of his next action thriller film Kaithi. The film is directed by Lokesh Kanagaraj of Managaram fame and is bankrolled by S. R. Prabhu under the banner Dream Warrior Pictures. The film which was wrapped up recently is now thriving vigorously in the post production stage. The production house has revealed the release date of the teaser of the film. 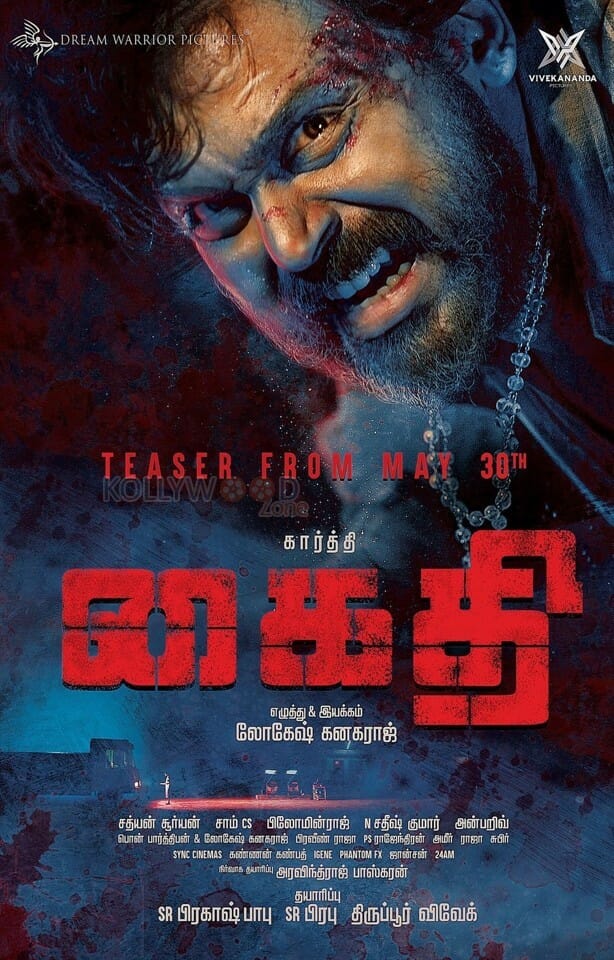 Taking to their official twitter page the production house has revealed the second look of the film along with sharing the information that the teaser of the flick will hit the internet on 30th of May. This was the news that thousands of fans of the actor was waiting for. Already the fans of his brother Surya brought down the roof of the theater in which the trailer of Kaapaan was released. We will have to wait to see what the fans of actor Karthi has in bags for him.

In the second look that was unveiled by the production house the actor looks extremely fierce and fuming with kind of rosary shackles around his neck. The film is about a prison break drama and is said to be about a chain of events that take place within a time span of four hours. Apart from actor Karthi the film has actors George Mariyaan, Anjathey fame actor Naren and Ramana in various other supporting roles. The music for the film is composed by music director Sam CS. While Sathyan Sooryan has handled the responsibility of cinematography, Philomin Raj will be trimming the film. The film is expected to hit the theaters on July.

On the work front, the actor is busy shooting for his untitled film with Jeethu Joseph in which he will be sharing the screen space with his sister in law Jyothika for the first time in his career. Following which he will join director Bakkiyaraj Kannan of Remo fame for a yet to be titled romantic comedy film which will have actresses Rashmika Mandanna as the female lead. Apart from these flicks the actor has also inked his signature for auteur Mani Ratnam’s ambitious epic historical fantasy film Ponniyin Selvan.