It is a season of horror and women centric films in the K town and it is not a surprise as to why actress Anjali chose one. The actress who has made here comeback to the big screens after a long gap has delivered a below average film and the main reason for it seems to the sloppy work of debutant Raju Viswanath. The secondary reason for the failure is the expectations that flourish in you when you see the 3D tag in the film. 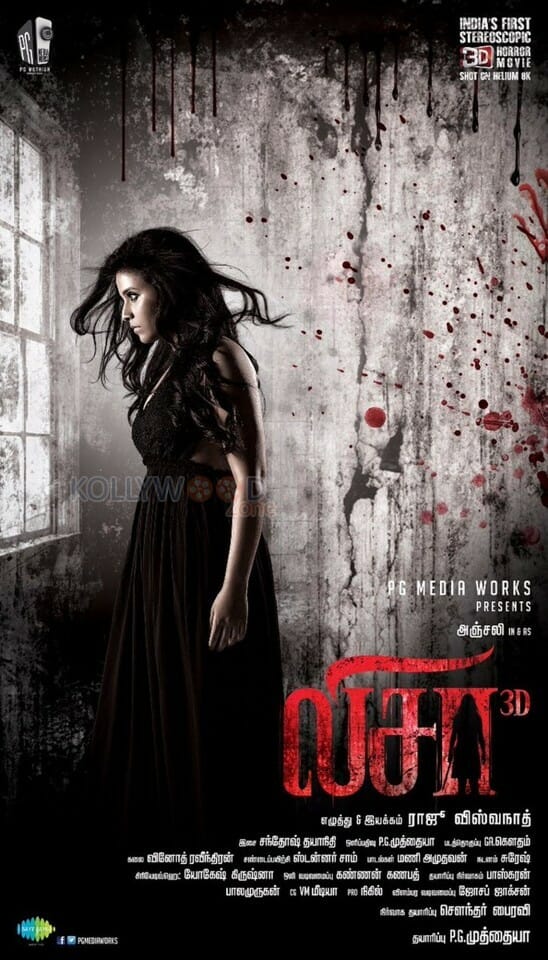 Lisaa (Anjali), a young woman has the opportunity in hand to start a life in the United States. But she feels bad about leaving her mother alone, who is troubled by the untimely demise of Lisaa’s father. Lisaa decides to get her mother remarried but finds it hard to convince her. While in the process of convincing her mother to remarry she learns about the guilt that her mother suffers from. Lisaa’s mother tells her that she still regrets leaving her parents to marry her dad and that was the reason for the unexpected demise of her father.

So moved by the so called sub plot that her mother just narrated, Lisaa comes up with a mind blowing idea. She decides to get the approval of her grandparents at least this time around for their daughter’s remarriage. So she sets up on a journey along with her college Junior Jagadeesh (Sam Jones) to the Western Ghats where her retired grandparents are currently spending their retired life.

When they locate the bungalow they find it to be in some remote location that does not even have mobile network coverage. From the time the duo arrived at the bungalow, they find the older couple to be super weird. Her grandpa with a threatening deep voice tone and grandma with her baleful look puts Lissa in to deep suspicion about the old weirdos. They go through some terrifying and daunting experiences in their time in the bungalow but they are swayed in to the thinking that the place is haunted. But slowly Lisaa starts to doubt about the authenticity of her grandparents and learns a horrifying secrete that she was not supposed to about them, from there things escalate faster than expected. What did Lisaa learn and did that cost the lives of the two youngsters or did they make it out of the bungalow alive, is what makes the rest of the story.

Anjali, who takes forward the movie from being at the center stage, has no room in the script to display her acting ability that we have seen in her previous flicks. However, the actress has done what was asked of her and shines in the rare moments where you get the jump scares. We cannot help but wonder what the role of Sam Jones in the film is, his character is one of the drop dead boring character penned down in Tamil cinema in the recent times. Though the selection of Makarand Deshpande is a wise choice the director has failed to use him to his full potential.

Debutant Raju Viswanath has taken up the plot of an already well cooked flick The visit and has done enough amount of damage to the script with his sloppy additions to make it just another miserable potboiler horror flick.

On the whole, lack of depth, sloppy writing insipid comical as well as the stuffed social message at the end of the film makes Lisaa a mediocre drama that you would want to miss.