Charlie Chaplin 2 is a sequel to the superhit film Charlie Chaplin (2005), which stars Prabhu Deva, Prabhu Ganesan, Nikki Galrani & Adah Sharma.  It is a watchable film with a few laughable moments.

After a long break of 8 years, director Sakthi Chidambaram has returned to direction with the film ‘Charlie Chaplin 2’, starring Prabhu Deva, Nikki Galrani, Prabhu Ganesan, and Adah Sharma. It is a complete comedy flick laced with necessary commercial elements.

The film is a sequel to Sakthi Chidambaram’s 2002 hit film ‘Charlie Chaplin’, which had also featured Prabhu Ganesan and Prabhu Deva in the lead roles. But ‘Charlie Chaplin 2’ is not a continuation of the first part.

The songs and background music is scored by Amresh Ganesh and his song ‘Chinna Machan’ has garnered fans even before the release of the film. Soundar Rajan is the cinematographer and G Sasikumar is the editor for the film. Vijay Murugan is the art director and Kanal Kannan is the stunt director for ‘Charlie Chaplin 2’. 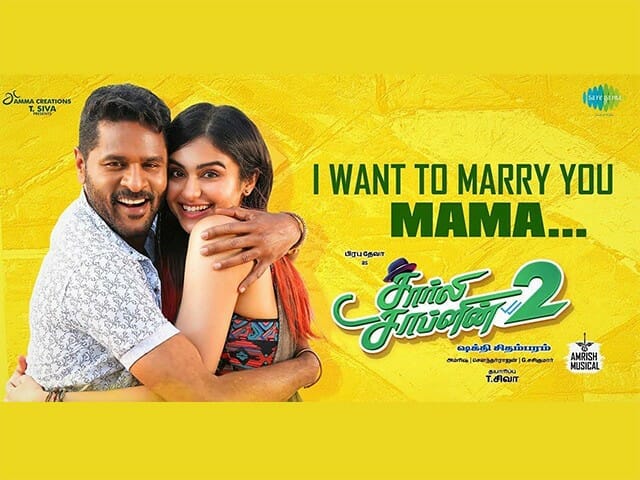 Thiru (Prabhu Deva), who runs a matrimonial bureau, has successfully arranged 99 marriages under his matrimonial site with the help of his colleagues (Chandana and Aravind Akash). His parents want him to get settled, and he eventually falls in love with a girl Sara (Nikki Galrani), the daughter of Ramakrishnan (Prabhu Ganesan). On learning this, Sara, too expresses her love and their marriage is fixed.

But, things take an ugly turn when Thiru’s friend Raja (Vivek), tell him to cancel the wedding as he is doubtful of Sara’s behavior. He even shows a proof to prove his statement. A disheartened Thiru sends a message to Sara to call off the wedding. In the meantime, another girl Saara (Adah Sharma), too, enters the story. How Thiru solves this issue forms the rest of the story.

The film follows an age-old formula, which is not bad. There are few scenes which work, kudos to the acting of Prabhu Deva, who supports the film on his shoulders. Prabhu Ganesan, Adah Sharma, and Nikki Galrani performed their roles neatly. Ravi Mariya and Vivek’s presence invoke laughter in a few sequences.

A drawback in the film is the way a simple problem is treated in a complex way, turning the story a never ending one. Though the film offers laughs in some scenes as expected, the logic goes out of the window several times. Also, the numerous songs in the film make no impact and tests our patience. On the whole, ‘Charlie Chaplin 2’ is a watchable film with a few laughable moments.