Kollywood’s lead actor Vishaal’s movie ‘Marudhu’ has got released today and Vishal is back to his best. The movie was directed by M. Muthaiah who is known for rural action entertainers. This time the story was written by Gowtham Raj. Vishal is back to his routine formula of Sandakozhi, Poojai, Kathakkali. In this movie the female lead is played by Sri Divya. 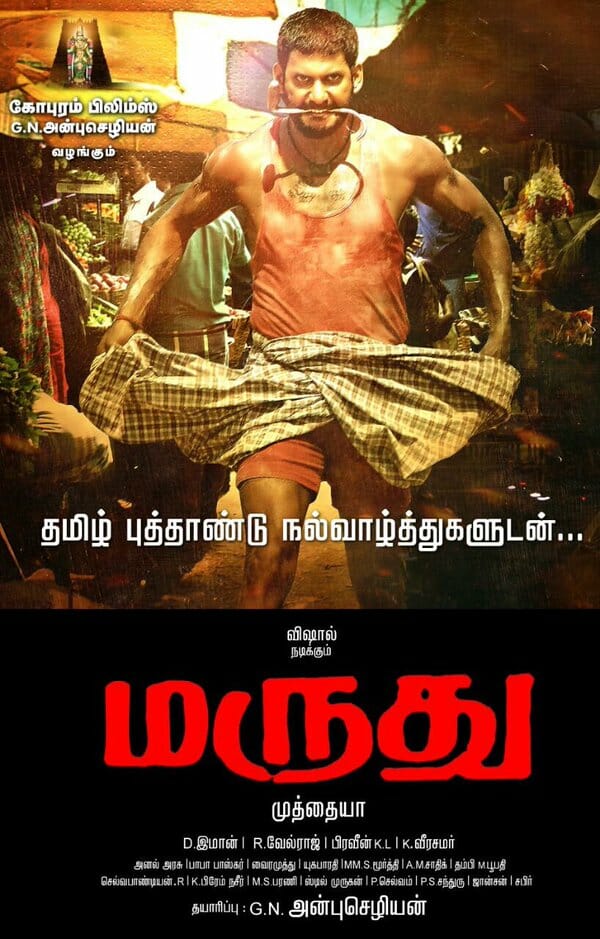 Actors like Radha Ravi, Soori, RK. Suresh, Namo Narayana have done supporting roles in this movie. The music for this movie is composed by the Tamil cinema’s hit musician D. Imman. J. Venkatesh has made the production for Marudhu. The cinematography work was done by Velraj and editing work was done by KL. Praveen.

This movie is about a rural drama movie and the story revolves around a man and his grandmother. It is a highly energetic action oriented movie and in this movie Vishal’s getup is completely different. Sri Divya has acted beautifully and her homely appearance will cover many youngsters. She will be seen in a rural get up for the first time.

The first half of the movie is a commercial entertainer. Second half is more emotional. The movie is also releasing in Telugu as ‘Rayudu’ and to suit Telugu audience, the director has focused more on action. The music director has given two beautiful and hit snumbers Othasada Rosa” and “Karuvakaatu Karuvaya” are liked by many. The dialogues are penned carefully and Vishaal has acted courageously in the movie and Radha Ravi’s performance was good and he has acted perfectly. Vishal’s rural costumes suit him to perfection.

The trailer of the movie has evoked lot of anticipations and the movie was released in 400 theatres in Tamilnadu. The movie was shot in southern districts of Tamilnadu and the cinematographer has captured the dry and rural areas in an exotic manner.

Overall, ‘Maruthu’ can be watched just for Vishal’s action!