Comedian turned hero actor Santhanam seems to be in a state of dilemma with whether to do comedy based films or out and out action flicks. And not wanting to take risk by chopping off one genre he opts to blend both action and comedy together as superstar Rajinikanth used to do in the 80’s which resulted in boosting his star image along with his box office collection. But unfortunately actor Santhanam’s choice of films in the action comedy genre, are not yielding him the success that he craves to relish. Instead it makes us to question the former top comedian’s decision to star only as lead hero in flicks. Director Vijay Anand who had previously directed a serious drama Thavam has opted to try his hands on the action comedy genre through Dagaalty. 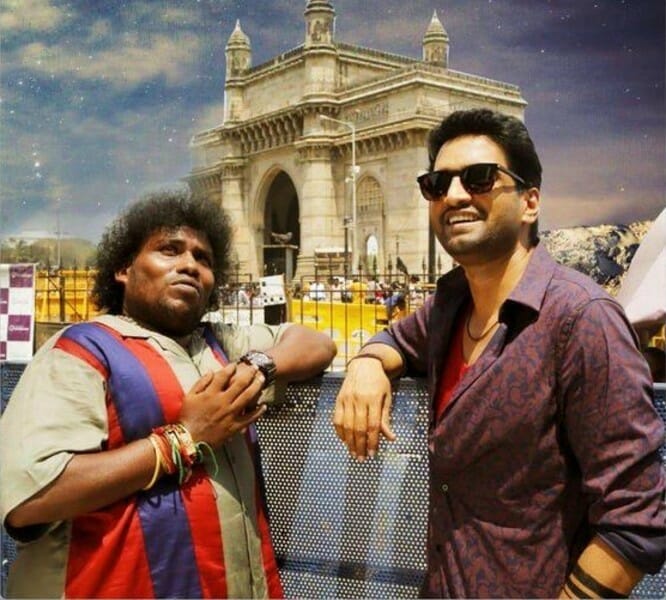 Guru (Santhanam) is a Mumbai based carefree youngster, who make ends meet by indulging in petty crimes. He works for a local funny don Bhai (Radha Ravi). (Caution: what is about to follow is not for weak hearted and they are asked to proceed at their own risk) Vijay Samrat (Tarun Arora), a multi millionaire sketches few portraits of a woman and gets in to a bizarre obsession to sleep with her at any cost. Not stopping with his awful day dreaming he pushes his ludicrousness a step further by sending the portrait of the woman to every local dons to find and bring her to him. He also places a whopping 10 crore fee for the one who would bring her to him. If you are wondering whether, did you just read what you read; the answer to it is an absolute yes! Time to time Tamil cinema has the ability to leave you thunderstruck with its bizarre conceptualization and stereotypical elements. Dagaalty takes that element to a whole different level.

The woman hunt project also lands on Bhai’s lap who allocates Guru to get the job done. Without breaking a sweat Guru finds the whereabouts of the girl in the portrait. He learns that she lives in Tiruchendhur in Tamil Nadu and sets out to bring her to Mumbai. Once he arrives at Tamil Nadu, he finds out that she goes by the name Malli (Rittika Sen) and is working to become a film maker. Guru gets acquainted to Malli in a stereotypical way and convinces her that he has connections with Shah Rukh Khan’s manager. He also promises that if she agrees to come with him to Mumbai she could be the next Farah Khan of Bollywood and make a movie with actor Shah Rukh Khan as her lead hero.

Believing Guru’s word Malli accompanies him to Mumbai where he takes her right away to Vijay Samrat and hands her over to him. But after he handed her over, he begins to feel for her and realizes the love he has for her. Meanwhile, Vijay Samrat snorts a dose of cocaine and gets ready to quench his lechery. Now Guru along with his friend (Yogi Babu) goes back to rescue her. Will they be able to rescue her at the right time is what makes the rest of the flick!

Director Vijay Anand seems to have penned few mass action sequences and some pointless punch dialogues first and then put them together to form the screenplay of Dagaalty. The story moves at the film makers own comfort zone with the sole intention of fabricating its lead hero to a mass image. Hence just like Santhanam keeps spewing out one liners throughout his films, in Dagaalty he keeps mouthing punch dialogues which get tedious after a point. The placement of songs and action blocks further weighs down the flick. Also, film maker Vijay Anand has upped the stereotypical level of the ‘loose ponnu’ characterization in Tamil cinema with Malli. If actor Santhanam inclines down the cinema aisle with the sole intention of delivering mass action films at a time when even mass heroes themselves are seeking for a way out, it would simply be a self inflicted disastrous.

Actor Santhanam seems to have run out of variations in the new avatar that he desperately tries to get in to. From his expressions to his body language everything looks repetitive to what we got acquainted to, in the actor’s first action comedy film Dhilluku Dhuddu. Actress Rittika Sen struggles even in a scope less character. Actor Radha Ravi shines in the limited screen time offered to him. One of the film’s most anticipating factors was the first time association of actor Yogi Babu and Santhanam. To the audience’s biggest disappointment the association has not bore positive fruit and has just left the audience with a handful of enjoyable one liners.

On the technical front, cinematographer Deepak Kumar Pathy frames are adequate while editor T. S. Suresh is the only saving grace of the flick as he has managed to keep the run time to 2 hours. Musician Vijay Narain’s music does not impress much except few portions of his background scores.

On the whole, Dagaalty is an indicator that screams out aloud that actor Santhanam should switch his track and find his rhythm soon to sustain as a lead hero.