Oru Naal Koothu is all about pre-wedding pressures that youngsters face in today’s world. The story has been narrated beautifully. All the lead actors have done a wonderful job. The portions related to IT professional’ s life and feminism could have been handled better. Otherwise Oru Naal Koothu is a refreshing breezy concept executed to perfection.

Oru Naal Koothu is another unique and different Tamil comedy drama flick which is crafted by debutante Nelson and produced by J. Selva Kumar and written by Sankar Dass and Nelson Venkatesan. The movie features Dinesh, Mia George and Nivetha Pethuraj have performed in the leading roles. Justin Prabhakaran has composed the music for this movie and Gokul has made vivid cinematography

A former beauty contestant winner from United Arab Emirates (UAE) Nivetha Pethuraj was selected to portray another leading female role for the movie. It is said that the soundtrack consists of five songs and the lyrics for which are written by Madhan Karky, Vivek, Veera, Sankar Dass and Gopalakrishna Bharathi. V.J. Sabu Joseph has made the editing work more professionally and his work is admirable by all. 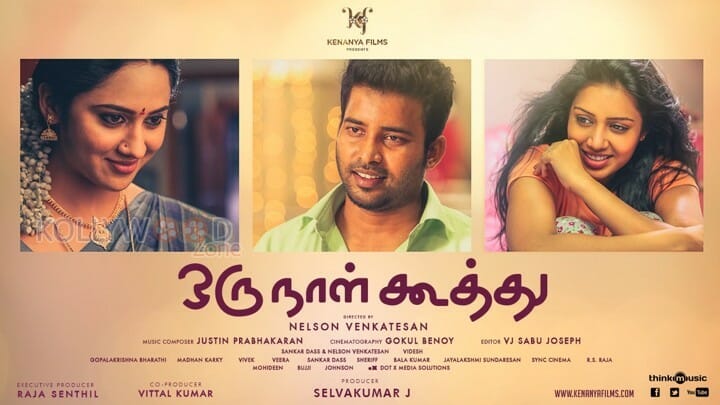 Oru Naal Koothu should grab the title Iraivi or Ladies as the major part of the movie revolves around women. The story is about three young women who are in the stage of getting married where Lakshmi as Mia George is a timid homely gal from Tiruchy and Radio Jockey Susheela as Riythvika and Nivetha Pethuraj as Kavya a head weight IT professional.

The director has the women’s problem more realistically, where Lakshmi’s problem is that her strange dad rejects all the eligible guys who come to see her various reasons. For Susheela, her dark complexion and job in the media and so no one comes to tie her knot. Last but not the least is Kavya and her tension is because of her boyfriend who is an introvert and he thinks badly about himself as he comes from a lower middle class family.

The movie shows the pre-wedding pressures that the youngsters face in today’s world. Mia George’s acting was good and her stylish performance will impress many. The director has narrated the story beautifully and he has linked all the characters in the climax. But still he loses steam in between as he tries to speak more on the IT professional’s life and more about feminism. That could have been avoided.

Overall, ‘Oru Naal Koothu’ is yet another refreshing breezy concept executed to perfection!