With all the posters and trailers conveying us that Ispade Rajavum Idhaya Raniyum, was going to be a whirlwind romance movie no one on earth would have expected an introduction between the couple that aggressively. When Gautham (Harish Kalyan) happens to meet Tara (Shilpa Manjunath) for the first time, he picks up a fight with her and throws her in to the pool nearby. 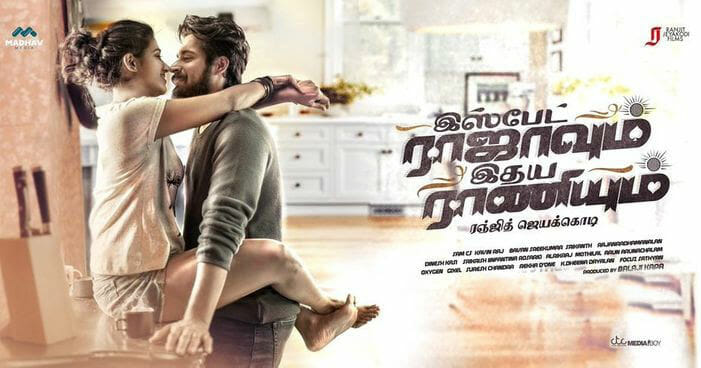 Gautham, a guy dealing with his anger management issues falls in love with Tara. The film nearly takes the entire first half to convey this to the audience. The film gets serious in the second half with his lack of ability to control his anger leading him to many serious troubles and even puts his love life in jeopardy.

The cause to the anger of Gautham is well portrayed. Though there are people around him to take care of him Gautham feels that he is alone and desires to have a special one to take care of him. Yes, Tara is that special one that he wants in his life. Initially, in all the places they meet they keep pulling each other down but after some point they realize that they are crazily in love with each other and that is where the trouble begins.

Tara is already engaged to someone else and now after realizing that she is in love with Gautham she has to convince her parents about Gautham, which she successfully accomplishes after an immense struggle. But things gets complex with the behavior of Gautham, his uncontrollable anger and over possessive nature keeps bringing trouble to the relationship. However, after every petty fight the couple comes together and accepts each other’s apology. The apology accepted moments were all beautifully framed and these moments ensure a smile on our face. If you are in to the movie merely for romance these are the moments that you should be looking out for.

As things keeps sliding down this way, at some point one in the two feels they cannot stay happy together. Are they going to part ways or reconcile their differences to settle together is what makes the rest of the story.

In the film there are conversations about the toxicity in the relationship, where the couple opens up on how each other’s action hurts each other. It is quite fresh. Actually it has been a long time that we have had a film where a couple sits down to discuss things that have to be set right between them. Ispade Rajavum Idhaya Raniyum has brought that in to Tamil cinema after a long time.

Apart from that the director has tried to break some clichés in the movie. Particularly, in contrast to most of the Tamil films, the female lead in the movie seems to have an opinion of her own about things and she is the one in the relationship to first initiate lovemaking sessions and does not shies away from stopping him when he hurts her. On the whole, if you are in to romance this could be a good movie for you.