Paramapadham Vilayattu marks a new milestone in the career of actress Trisha Krishnan. It is the star actress’s 60th film. It is not as easy as it might appear to sustain in an industry that has an infamous reputation for churning out films with poor women characterization and prefers for a new heroine after every 10 films. With that in mind actress Trisha Krishnan’s long run in the industry deserves a pat on the back. The actress who has not had a release in quite a while is back with her long delayed project Paramapadham Vilayattu. Debutant story teller Thirugnanam has launched his career with a political thriller based on few real life incidents. So is the political game engaging enough to put actress Trisha Krishnan back on track? To know that let us get in to the movie review. 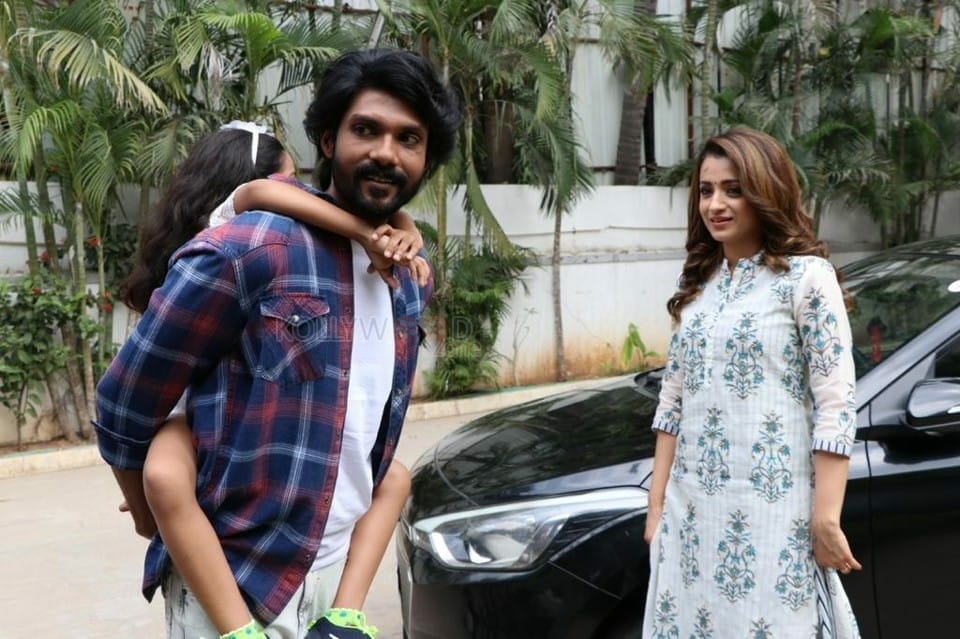 The film opens with a popular do-gooder political leader Cheziyan (Vela Ramamoorthy) gearing up for the forthcoming election. Polls are in favor of him, and he is more likely to be sworn in as chief minister. In unfortunate turn of events, he falls sick and his health deteriorates. Doctor Gayathri (Trisha Krishnan) is appointed to treat him. After few days of treatment he recuperates and becomes stable. But suddenly he passes away under mysterious circumstance. His party leaders Kalingan (A. L. Azhagappan) and Manimozhi (Sona Heiden) contend with each other to take his place. Meanwhile, Gayathri suspects foul play in Cheziyan’s death. She sets out on her own to dig deeper. Soon she begins to receive threats to quit her detective work. But she would not back down nor seek the help of her friend in the media. She carries on with her pursuit.

Gayathri learns that the events that took place in the hospital have been accidentally recorded on her smart watch gifted to her by her friend. Before she could do something about it she gets abducted by few goons along with her hearing and speaking impaired daughter Suji (Baby Manasvi Kottachi). They are kept in the typical forsaken bungalow of Tamil cinema, located in the middle of a forest. A professional hit man sent after her by the villain terrorizes her to handover the microchip, if not threatens to kill her daughter. Gayathri manages to escape from the bungalow along with her daughter and the eternal running and chasing begins in the woods. Was Cheziyan killed? If so, who is the murderer? Will Gayathri and her daughter escape from the hit man on time and bring the culprit behind the murder to justice, is what makes the rest of the flick.

Paramapadham Vilayattu was touted to be an intense political thriller drama. But what unfolds is a survival drama. Right after Cheziyan’s death you prepare yourself for the devious political game, but all you get is some tedious cat and mouse chase game. For some reasons director Thirugnanam has deserted his own mission to craft a political thriller. He seems to be confused or distracted about what he wants to deliver. His confusion reflects heavily on the movie as it moves aimlessly for the most parts. Story teller Thirugnanam had a potential plot line on which he could have built a decent flick if not a solid entertainer. But he simply ditches his core plot line and adds unnecessary sub plots that are completely irrelevant to the plot. He lays too much focus on these sub plots that we stop thinking about the political angle that was left hanging at the beginning.

Paramapadham Vilayattu not only lacks clarity but also is a victim of lazy and comfortable writing. Logic is the key ingredient to write a thriller, film maker Thirugnanam tosses reason to the gutter. He builds a scene out of anything he sees fit. For instance, the reason Gayathri gives to why her husband abandoned her and their child, asking a child to take care of itself in the woods during midnight, introducing a character at a very later stage of the film and calling him a hero, and so on. Most of the characters including actress Trisha Krishnan’s are so weakly written. They are erratic and behave eccentrically while they are not intended to be so. Even the technical departments do not add value to the film.

Actress Trisha Krishnan fights hard to shoulder the flick on her own but the writing is so bad that nullifies the star actress’s performance. Child artist Baby Manasvi Kottachi is impressive in the role of a hearing and speaking impaired kid. She has performed beautifully even in tense portions portraying the anxiety quite well. Actor Vela Ramamoorthy makes his presence felt even in a very short screen time. Actor Richard Rishi struggles to perform even in a role that does not have many dialogues. He is numb as a wood. The rest of the cast has delivered an okayish performance.

On the technical front, music director Amresh Ganesh’s tracks as well as background scores are just noisy. Cinematographer Dinesh’s frames are middling for a thriller that predominantly happens overnight. Editor C. S. Prem Kumar has made efforts to make the flick as sharp as possible with his trims.

On the whole, the snake and ladder game does not entertain, as even the snakes and ladders in the game slides down through the big loopholes in the plot.