Sandeep Chowta has worked on the background score. After lots of delay, the movie has finally hit screens today and the movie is a shallow thriller. Thanks to some occassional humour from Santhanam and VTV Ganesh, the movie is watchable. It is obvious that Director Premsai was badly inspired from the Hollywood film ‘Premium Rush’. 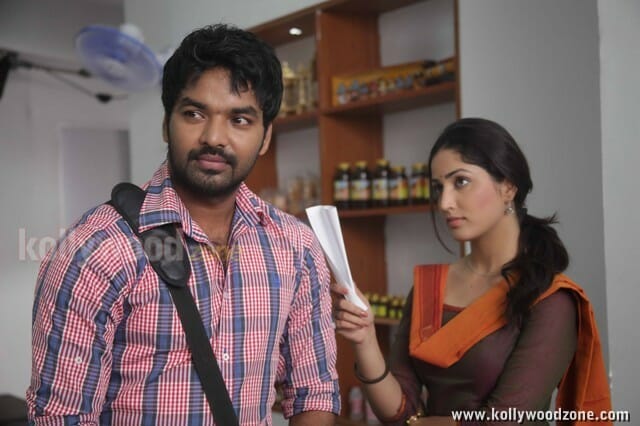 He has given a local flavour in screenplay and has blended it with Medical crime genre. Apart from this, the movie also has some boring romance track between Tamilselvan (Jai) and Kavya (Yami Gautam) and boring song sequences which never gel with the story. Tamilselvan is a happy going guy who finds tough to get a job. When he is given a task of handing over a courier to Kavya, he falls in love with her at first sight.

But that creates troubles and how he solves them forms the rest of the story. Jai is handsome and smart. However he still needs to travel a long way in order to get into action scenes. Presai finds a good interval pause, but he couldn’t keep the screenplay engaging. There are also some touches of Gautam Menon here and there. There are lots of sub-plots and everything is half-hearted.

Antony has done a good job through editing and running time is kept beyond 2 hours. The movie was well set-up with an interesting cat-and-mouse game, only to realize later that the sub-plot is a half-hearted effort. Things could have been better with right stuff at right places. But debutante has failed in doing so and the movie ends half-baked.

Overall, a shallow thriller once again!