Actors, or musicians, or technicians shifting gears and becoming a film maker is a regular happening in Tamil cinema. The latest one to join the big list is veteran choreographer Brinda master. The dance icon who has a serious reputation for her trade makes her directorial debut with Hey Sinamika. Lyrist Madhan Karky has penned the script for the flick. Actor Dulquer Salmaan who was last seen in Tamil in the romantic comedy caper film Kannum Kannum Kollaiyadithaal is back to Tamil cinema nearly after two long years. Actresses Aditi Rao Hydari and Kajal Aggarwal plays the female lead roles. So, how has the drama come out? Will it be a successful outing for actor Dulquer Salmaan in Tamil after a long time? To know that let us get in to the movie review.

Hey Sinamika tells us the tale of a newly married young husband and wife, Yaazhan (Dulquer Salmaan) and Mouna (Aditi Rao Hydari). Yaazhan is a loquacious dynamic young IT professional. He meets Mouna, on the opening scene of the film and it is love at first sight. The duo goes under wedlock at a stoke. Yaazhan understands his wife’s demanding job and takes care of the house and chores. He is sort of obsessive about Mouna and does not want her to miss him anytime even when she takes a shower. Mouna grows tired of him and feels she is in a tight space in the marriage. She wants to get away from Yaazhan for the time being. She gets a transfer to Pondicherry to be free from his fixated love. But what does a Tamil cinema hero do to impress his girl? When Suriya travels all the way to United States to impress his girl Meghna in Vaaranam Aayiram, why not travel 150 odd kilometers to impress you wife? Yaazhan does it. But on seeing Yaazhan, Mouna is not pleasantly surprised as Meghna was by seeing Suriya. 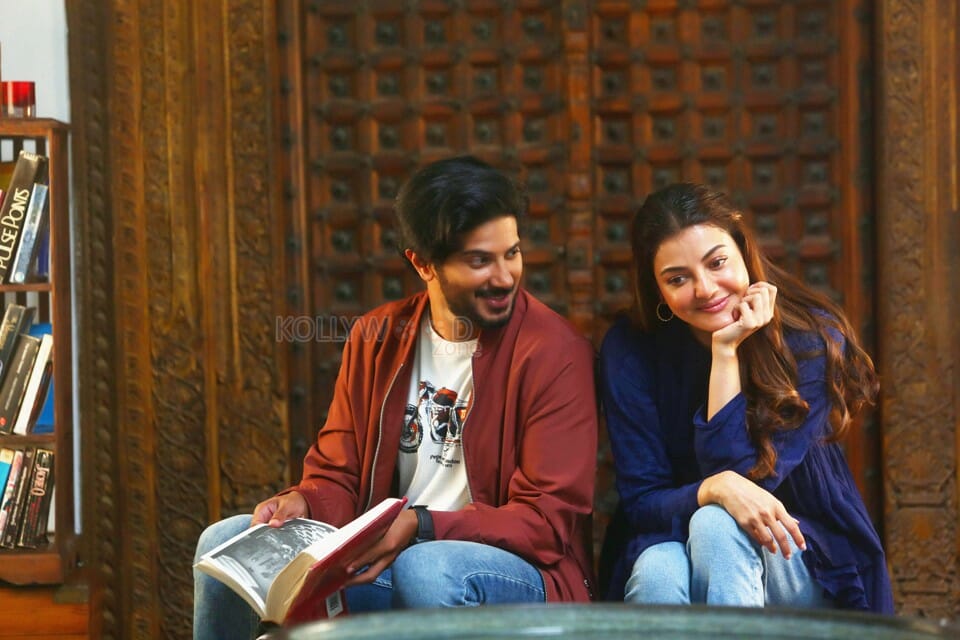 Instead, she decides to break the marriage. To do so, she comes up with a devious plan. She brokers a deal with Dr. Malarvizhi (Kajal Aggarwal), a relationship expert with a belief that all men are promiscuous. She is also, it is said, is a person with a reputation of breaking up marriages. The game is for Malarvizhi to make Yaazhan fall in love with her. So, Mouna can use that as an excuse to break her marriage with Yaazhan. Malarvizhi walks in to their life. Yaazhan gets close to her. But things are not what Mouna anticipated. Will Mouna break up her marriage, if so, will Malarvizhi and Yaazhan end up together, is what makes the rest of the flick.

Hey Sinamika aims to be auteur Mani Ratnam’s Ok Kanmani and Gautham Vasudev Menon’s Vinnaithaandi Varuvaayaa but all we get unintentionally is C. S. Amudhan’s Thamizh Padam. Hey Sinamika makes us feel as if it was a satire drama of all popular love flicks of Tamil cinema. Take the opening scene of the movie, when Yaazhan meets Mouna for the first time the cosmos reacting to their first meeting. The scene could not be staged in a more cliched way. Just like us audience, they have no idea about each other’s character but begin to talk of marriage. Seriously? If only falling in love and getting married was this easy, everyone in the world would have a love marriage.

To be fair, Hey Sinamika works well, and perhaps would have worked even better if it had been approached in as a comedy film rather than trying to force it as a poignant triangle love drama. Because the stage was set so well to draw comedy out of the couple set up. In fact, the movie does it, in the first half with the things Mouna resorts to, to shut Yaazhan from speaking incessantly. As long as the film navigates within these borders, it entertains us. That is changed when it starts to take itself seriously. As it really has nothing up its sleeves to be a serious relationship drama, and is effortlessly predictable. Another good thing about the flick is how the male character Yaazhan is shaped. Being so used to seeing male characters as an arrogant husband, watching Yaazhan as a gentle husband is refreshing.

Dulquer Salmaan and Aditi Rao Hydari combats hard to keep us invested in the dearth romance drama but it is only so much actors can do in a weak script. Actor Dulquer Salmaan fits perfectly in the role of Yaazhan. He has got under the skin of the character quite well. Actress Aditi Rao Hydari is gorgeous as Mouna. She makes up for the passably written role with her performance. Actress Kajal Aggarwal is functional. Actress Nakshatra Nagesh is adequate. Actor RJ Vijay lights up the mood. Comedian Yogi Babu serves his purpose. The rest of the cast has delivered what was asked of them.

On the technical front, musician Govind Vasantha’s tracks are passable. His background score aid in setting the feel-good mood of the flick. Cinematographer Preetha Jayaraman has covered the flick from all the best angles possible. Editor Radha Sridhar has done a fine job with his sharp cuts.

On the whole, Hey Sinamika entertains in bits and pieces but falls flat when regarded as a whole romance drama.