At present, when you hear the genre rural family entertainer, it automatically pulls actors Sasi Kumar and Samuthirakani’s name. Such is the number of films both the actors have done on that genre. The actor who was last seen on rural family drama Raajavamsam is back on screens with yet another rural family drama titled Kombu Vatcha Singamda. Film maker S. R. Prabhakaran who previously teamed up with Sasi Kumar for Sundarapandian has helmed the drama. So, how has the movie come out? Is it solid enough to put actor Sasi Kumar back on the driver’s seat on the rural family drama vehicle to which the actor has a special license? To know that let us get in to the movie review. 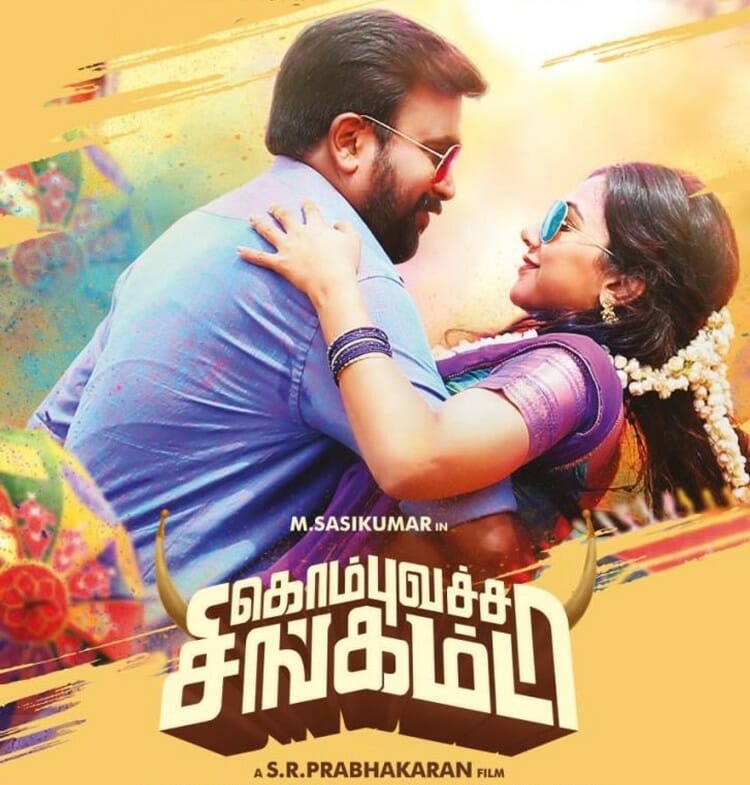 Kombu Vatcha Singamda revolves around Deivendran’s (Mahendran) family. Right on the very first scene the film sets its tone with an emotive moral lecture delivered by an Eelam militant (Samuthirakani) to a bunch of kids (Sasi Kumar and his friends). He keeps it short and crisp asking them to never discriminate and inculcate egalitarianism in them. Fast forward, we see the kids have evolved with the principle taught to them and have become the followers of Thaanthai Periyar. Apparently, when they come across any social injustice or caste-based discrimination, they roll up their sleeves and ensure the justice is done. Sasi Kumar is the son of Deivendran, a revered man in Krishnarayapuram village in Karur. Vellappan (Hareesh Peradi) a blatant casteist in the village tries to outdo Deivendran and become the power center. His cunning discriminatory ploys devised to divide people often receive opposition from Sasi Kumar and his friends.

Sasi Kumar meets Thamzhselvi (Madonna Sebastian) the daughter of Vellappan and? Yep, you got it right. He falls in love with her. Why do heroes of Tamil cinema keep falling in love with the daughter of the one that is planning on killing their family? Love can be blind but not risky, no? Meanwhile, the local body elections are declared. Sasi Kumar is forced to takes a decision on request of his father. The dirty politics divide the friends and they begin to work for different fractions. Things get ugly and violent resulting in the death of two of the friends. Will Sasi Kumar figure the political game behind this and bring those responsible to the face of justice, is what makes the rest of the flick.

Kombu Vatcha Singamda seem like a tailored effort to better suit actor Sasi Kumar. Looks like director S. R. Prabhakaran had already fixed the actor on mind and then wrote the story. Nonetheless, he has his heart in the right place. He wants his film to lay light on the caste set up in villages, and how it is deviously fueled to reap political gains even at the cost of innocent lives. He tries to position Kombu Vatcha Singamda against these practices. To achieve that he sets up situations and events to explain the caste dynamics and pens sharp dialogues or notes, whichever better suits the situation, to hit out on the caste system. He largely succeeds in his attempt. Whether be it making his lead character to express his regret for how the old generation is struck with these discriminating practices, or making the group of friends go around commenting on political ideologies.

What happens to be the strength of the drama is also the weakness of it. While the powerful bits carry the right message, they do not have enough depth and do not have a gripping story to sit on. It is the same old revenge angle that plays out. Also, at times the film sort of makes us feel like we are in a political lecture. On top of it, we have the mandatory romance portion that in no way is relevant to the flick. Let alone the chemistry between them. But director S. R. Prabhakaran makes up for all the slipups with his climax part and sends us home with a poignant touch.

If actor Sasi Kumar could not play the rural guy to perfection than who can? He fits in the role quite well and pulls it off without efforts. Actress Madonna Sebastian exist in the world just to cover the romance part. Comedian Soori entertains us inconsistently but is solid in emotional scenes. Veteran director and actor Mahendran makes his presence felt with his towering performance. Actor Hareesh Peradi in yet another typical role that he has been playing film after film. Actors Aruldoss, Kulappulli Leela, Raghav Vijay, Abi Saravanan, and Sangili Murugan have all chipped in and played their part well. The rest of the cast has delivered what was asked of them.

On the technical front, musician Dhibu Ninan Thomas’s tracks are not inspiring and their impact do not last long. But he adds value to the flick with his background score. Cinematographer N. K. Ekambaram’s visuals are adequate. Editor V. Don Bosco has done a decent job with his trims.

On the whole, Kombu Vatcha Singamda lies very much in actor Sasi Kumar’s trademark zone and might cater well to his audience