SJ Surya who once turned the heads of movie goers towards his side with his directorial dexterity is now turning heads with his acting adroitness. How would you feel when we call attention to the fact that the artist who was once tagged as an adult only filmmaker has essayed a beautiful role in Monster that is merely targeted at kids and family? We guess that is what puts an artist under the versatility category. Though director Nelson Venkatesan lets loose in screenplay he makes it up with a new approach and comical moves to reach up to children and family audience.

Anjanam Azhagiya Pillai (SJ Surya) is a very content and happy middle class engineer who is well settled and works with the government electricity board. When he was young, attracted by the preachings of Tamil saint Vallalar which he gets through an elder in the family, he becomes a follower of Vallalar. So our Anjanam Azhagiya Pillai is a compassionate individual to all living beings on earth. You can name him as the updated version of Aniyaan Ambi. This principle that he follows helps him to magnetize Meghala (Priya Bhavani Shankar) who falls for his compassionate nature though at first she rejects him just by glancing at his photo. 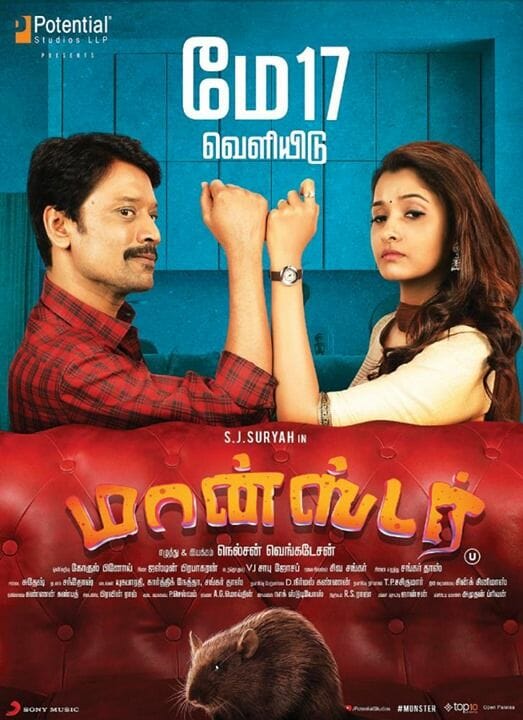 While on the other hand, the principle he follows is put to test when a torturous and menacing rodent enters his new apartment and refrains from leaving the house. With the rodent developing a special fondness for the rusk that Anjanam snacks on things get further worse and all his attempts to get rid of the rodent ends up futile. Meanwhile, we learn that the flat’s previous dweller was a smuggler and has hid pricey diamonds in the house and is in extreme desperation to recuperate them. Will the smuggler get his diamonds back or did SJ Surya succeed in his attempt to get rid of the rat without giving up on his principle or did they sign an agreement to coexist, is what makes the rest of the Monster.

SJ Surya seems to be a tailor made artist to portray the character of Anjanam Azhagiya Pillai. He literally fills the character with life with his dialogue delivery style and classic comical innocent expressions. The actor is a clever addition to the cast who shoulders the film single handedly on his own.

Though actress Priya Bhavani Shankar shines in certain scenes, her characterization is very careless framed and thus leaves only a little impact on us at the end of the film making us feel is an actress really necessary for the film. Comedian Karunakaran do make us laugh in some instances but does not add much to the film.

The best thing director Nelson Venkatesan did for Monster is to approach SJ Surya to play the lead role in his film. It seems like the director’s center of attention was only on Anjanam Azhagiya Pillai and the rat because the characterization of Anjanam was fresh, in fact first of its kind if we do not count on Ambi’s character. But the director has failed to work on the characterization of Priya Bhavani Shankar and Karunakaran in the film.

Gokul Benoy’s cinematography deserves a special mention as his frame works really help the film to bring out the best, particularly in scenes which depicts a man’s struggle with a rat which is turning his newly brought apartment in to a theatre of war.

On the whole, with swift screen play and crisp narration the film would have gone in to the list of children’s classics of Tamil cinema. But director Nelson Venkatesan has let down his own work with his lazy writing.