If you are looking for an awesome time, then Silukkuvarupatti Singam is sure to please you. After the stunning performance in psycho thriller ‘Ratsasan’, Vishnu Vishal is back with his comedy flick which is quite similar (genre) to his previous film ‘Velainu Vandhutta Vellaikaran’. The movie doesn’t have an extraordinary story line, nor does it lean on a narrative. It is a complete comedy-cum-action movie. The characters are as quirky as it gets and the credibility with which the artists present ridicule is truly astounding. 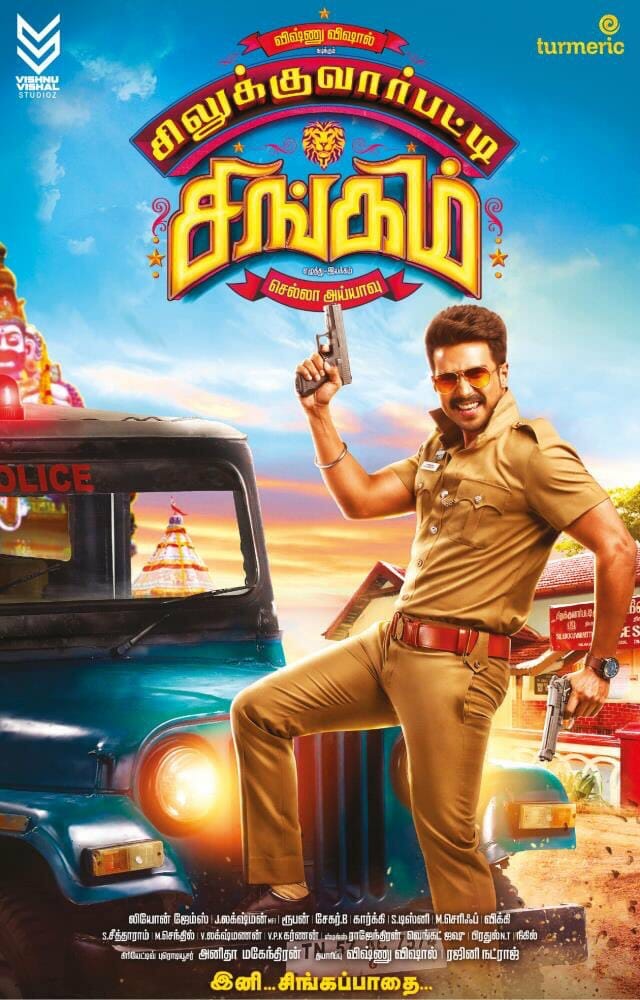 The story is about Sathyamoorthy (Vishnu Vishal) a constable in Silukkuvarupatti hamlet, who is a complete chatter box. He loves to roam with pretty ladies, have a good time or dance with the local dancer Kanaga (Oviya). His main job is to get food for his senior officers at the police station. The only situation he cannot control his anger is when someone troubles him while tasting his most loved half-boiled eggs!!

Cycle Shankar (Sai Ravi) is a merciless mobster, who is on run from the top police officials in Chennai. He travels to Silukkuvarupatti to kill an ex-minister (Mansoor Ali Khan), but ends up in jail because of Sathyamoorthy who has no idea about who he is! Shankar is tormented at the police station mainly by Sathyamoorthy who is not aware of the fact that he is a dangerous gangster who is the most wanted criminal by the Tamil Nadu police. Shankar’s accomplices enter the police station and rescues him, but he wants to take revenge on Sathyamoorthy before he kills the ex-minister.

You know some movies just charms us right from the beginning, and Silukkuvarupatti Singam is one such film. It keeps you engaged with its interesting storyline. Vishu Vishal is apt in the character of Sathyamoorthy. He has put his maximum effort and confidently holds the movie together. His dance moves and comedy timing are quite appealing. It is not a movie without plot holes, as the rape jokes could have been prevented and a few jokes are irritating.

Other than Vishnu, the movie has an army of comedians including Yogi Babu (who is pretty amazing), Anandaraj, Karunakaran, Mansoor Ali Khan, Lollu Sabha Manohar, and Singamuthu. Regina Cassandra has very less scope for acting, and she looks uncomfortable and stiff in sequences where she needed to be easy and natural. Oviya does justice to her cameo role.

The songs composed by music director Leon James are quite pleasant, but the background music is not up to the level. Editor Ruben has done a fantastic job in editing the movie with an ideal screen time and the end credits starring Anandaraj will be an entertainment for Superstar Rajinikanth’s fans!

On the whole, debutante director Chella’s Silukkuvarupatti Singam is a clear winner and majority of the credit must go its stars who had put their maximum effort to make it an enjoyable film. Book your tickets, buy your popcorn and have a blast!