Gautham Karthik seems to be in a spree of delivering lackluster flicks back to back. The actor who disappointed the audience in his last film Mr. Chandramouli has yet again for a second time in a row has delivered a cliché drama Devarattam. People who happened to have watched the director’s previous films like Kuttipuli and Komban will know precisely what to expect out of this movie. But sadly the film falls short of the very own standards that the director’s previous films have set. 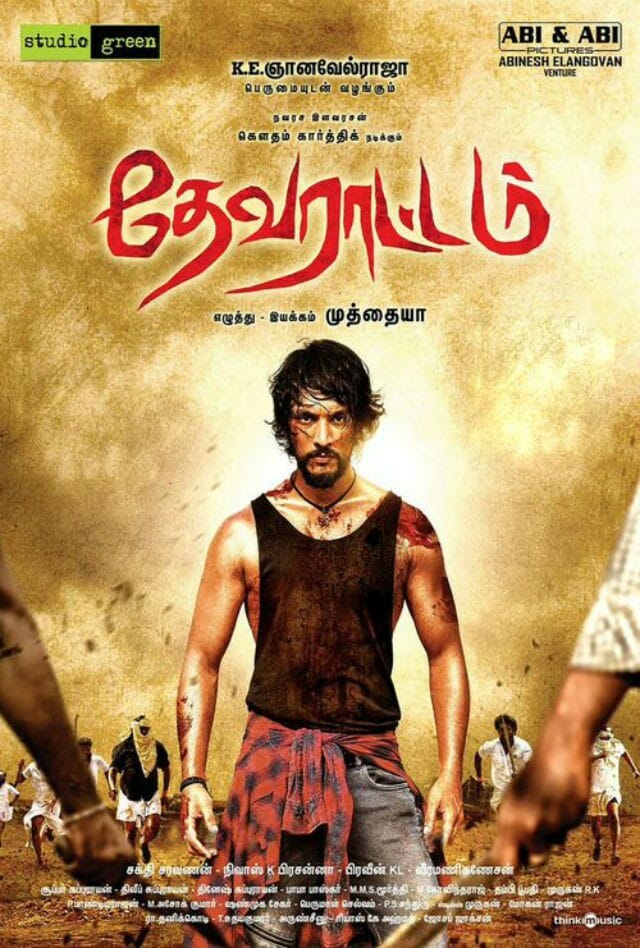 Vetri (Gautham Karthik) is a brave young man from Madurai who is the youngest one among his six sisters. Quite a huge family something you would get to see in director Hari’s films. The angry young man despite being a lawyer believes in vigilante justice and he takes the path of violence when some girl gets sexually offended by a gang of spoiled brats.

Meanwhile, Madhu (Manjima Mohan) also a law student is introduced protesting just outside a TASMAC shop with few other law students. Eventually the inevitable happens; Vetri falls for Madhu and with the display of machismo makes Madhu fall for him. Apart from the overflow of sentiments we do not get to see much in the first half. The scene where his entire family accompanies Vetri to court when he enters it for the first time is too much to stomach.

When a young man tries to get away with a sexual offender Vetri slays them both. The one among the slayed happens to be the son of a rich and powerful man in the Madurai city, Ganesan (FEFSI Vijayan). Now, Ganesan wants payback and he is going after Vetri and his family to quench his thirst for revenge. Does Vetri manage to save his kith and kin and ensure that justice is served is what makes the rest of the film.

Gautham Karthik gets a massive mass entry for the first time in his career but battles it out to the very extent that he can to fit in the role. This may be the effect of having seen the actor as a chocolate boy in his entire filmography. The actor struggles to deliver a convincing performance, particularly in moments where the dialogues are delivered furiously with rage. However, the actor shines in the action and dance sequences as usual.

Manjima Mohan seems to have been brought on board just to eliminate the no heroine tag. The actress is not the one to blame as there is no scope in the script for her to prove herself. Soori turns to be a miserable addition to the cast as he disappoints and it is the annoying comedy track that is to be blamed. Apart from them the film has quite a number of artists to fill in the huge family space. Though nobody except actress Vinodhini were given a significant part to play, everybody has played their part well.

Director Muthaiah, film after film with solid confidence dishes out scripts in the same relationship sentiments and action template. Time is high for the director to realize that the millennial generation seeks justice but not in the toxic masculinity means.

On the whole, a cliché film with more bloodshed and a free pass to slay lives as one desires which seems to have been targeted at the audience of B and C centers where people have grown to different expectations now.