Valimai has finally hit the screens and it is Thala weekend for actor Ajith Kumar’s fans. The theaters are roaring with celebration. As the weekend is fully booked. Along with the celebrations, we also had a couple of bad incidents a petrol bomb was hurled in a theater in Coimbatore city and one of the iconic theaters of Chennai Rohini Cinemas was vandalized. These episodes have sent a shock wave amidst the aficionados of the actor. Director H. Vinoth has teamed up with actor Ajith Kumar for the second time after the massive success of Nerkonda Paarvai. So, how has the film come out? Will Valimai stand up to the expectations that it engendered among the audience and be a consecutive hit from the actor-director duo? To know that let us get in to the movie review. 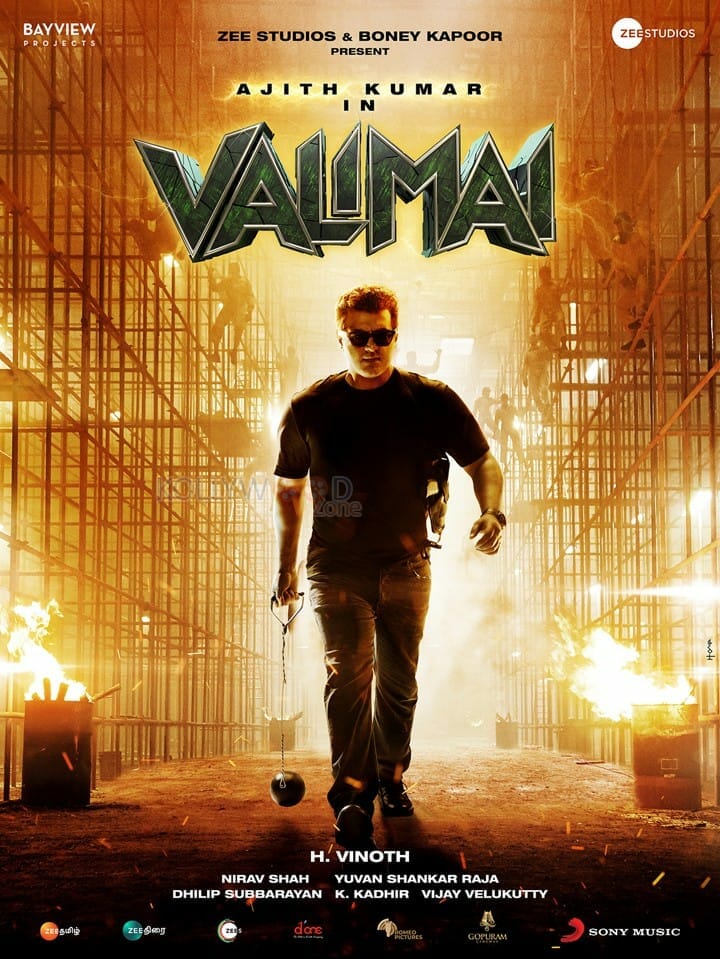 The entertainer follows the life of an IPS officer Arjun Kumar (Ajith Kumar). When Valimai opens we witness a gang of masked bikers involved in chain snatching in Chennai. The people are agitated and demand for answers from the cops who seem to be clueless about what is happening in the city. A cop in the department desires for a super hero cop who could stop these events from happening. The scene cuts and opens in Madurai. There is a procession underway carried by devotees of a temple. Speaking of God, we have our hero introduction in a massive grandiose style equating his vigor to that of thunderstorms. As the film unfolds, we get a glimpse of his family. He resides with his mother (Sumithra), his older brother Kothandam (Achyuth Kumar), younger sister (Sunaina Badam), and younger brother Ashok (Raj Ayyappa).

Arjun is transferred to Chennai; he takes charge and begins his investigation on a suicide case. Arjun figures out that the death is connected to the gang of bikes that perpetrate a series of crimes in the city. He sends an officer to enquire more about the gang. Arjun learns that Wolfranga (Kartikeya Gummakonda) is the head of the gang and they call themselves the Satan’s slave. Arjun goes after Wolfranga. He apprehends him after a chase, and action block. They arrange a convey to transfer Wolfranga to prison. The bikers gang hits the convey and facilitate Wolfranga’s escape. Arjun gets injured in the incident. The department relieve him from the case. Why was Arjun relieved from the case, will he go on a vigilante mission to put Wolfranga behind the bars, is what makes the rest of the flick.

Director H. Vinoth’s Theeran Adhigaaram Ondru worked well because of the gripping story it had under its sleeves. Unfortunately, the same cannot be said for Valimai. The story of Valimai is the longstanding ‘moralist hero amending the bad’ delivered along with a social message. Lately, there is a sentiment angle in all the films of actor Ajith. Sister sentiment in Vedalam, daughter sentiment in Viswasam, and it is the favorite mother’s sentiment of Tamil cinema in Valimai. The thing with the sentiment angle in Valimai is it has not clicked in favor of the drama this time around. It looks forced. As the result the emotions look contrived and staged to simply draw sympathy for the sake of sympathizing. The way in which director Vinoth structures the family of Arjun Kumar is in itself is problematic. Except for Arjun Kumar nobody in his family seem to possess the conviction to lead a life on their own. All of them in some way or the other is reliant on Arjun Kumar.

Seems like story teller H. Vinoth has put all his balls in the stunt basket. The film was promoted as a super action thriller drama. If film maker H. Vinoth had stayed entirely true to that course, Valimai could have been a solid action entertainer. As the stunt sequences are well choreographed and executed. But director H. Vinoth gets in to the dilemma of as to whether to keep the plot as an out and out action-drama dearth of the mandatory sentiment angle and social message. In that oscillation he has decided to mixed things up and to have something for everyone. But has ended up cooking a drama that does not satisfy anyone completely.

Actor Ajith Kumar looks fit and sharp. The hard work the man put in for the action blocks is quite evident. Actress Huma Qureshi in a typical Tamil cinema heroine filler roller. Nonetheless, she has done justice to her part. Actor Kartikeya Gummakonda is menacing. Actress Sumithra is adequate. Actor Dhruvan is effective. Actress Chaitra Reddy has done her part well. Actress Pearle Maaney is functional. Actor Pugazh in an amusing cameo. The rest of the cast has delivered what was asked of them.

On the technical front, musician Yuvan Shankar Raja still has not reached his best. His tracks are passable. Musician Ghibran adds value with his thundering background score which lifts the mass moments. Cinematographer K Nirav Shah has covered the flick from all the best angles possible. Editor Vijay Velukutty has done a fine job with his sharp cuts.

On the whole, Actor Ajith Kumar’s Valimai is certainly a treat for the fans of the star with stunning stunt sequences but it might not be everyone’s cup of tea.