Santhanam’s last outing with the sequel of horror comedy Dhilluku Dhuddu did taste some level of commercial success but not as the prequel of the franchise. The fans of the actor are waiting for him to deliver a solid block buster under his name. So amidst high expectations the star’s next action comedy entertainer A1: Accused No. 1 has hit the screens today. But unfortunately the entertainer turns out to be a below average film.

Saravanan (Santhanam) is a jobless happy go lucky guy who hails from the part of North Madras. Just like the typical mass heroes of Tamil cinema he leads a happy carefree life with spending most of his time with his friends from the locality. On the other hand the female lead Divya (Tara Alisha Berry) who works in an IT firm is from a conservative Brahmin family, who lives with her father Ramanathan (Yatin Karyekar) a social activist and do-gooder with a flawless human being image in the society. 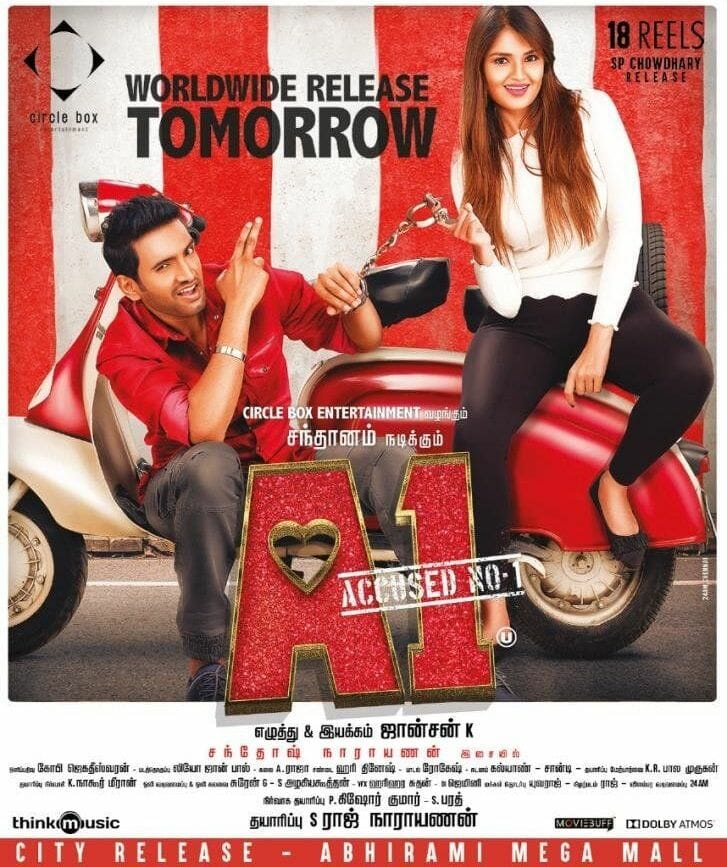 Divya has a peculiar desire of getting married to a goon from her own community. She happens to meet Saravanan and falls for him in their very first meeting by mistaking him to be an orthodox Brahmin. She proposes him as well only to realize later that he does not belong to her community. Ramanathan comes to know about his daughter’s love and express his condemnation to her relationship with Saravanan.

As we are used to seeing what a hero in Tamil cinema does after getting rejected by a girl, here Saravanan does the same. He gets drunk with his gang. When high on booze he swears to murder the father of his girl whom he thinks have ruined his life. A slight twist waits him as well as the audience when he wakes up in the morning. His friends convey him that they have already killed him as he had wanted to. Now, Saravanan is shocked and dumbstruck. Did the gang really murder him or was there someone else who did it, if so how did they murder him, is what makes the rest of the film which is narrated in a comical way with little twist in the tale. More than action comedy genre the flick is more sort of a black comedy type.

The first half of the film is totally a done to death storyline of Tamil cinema and the cliché elements makes it difficult for the audience to engage with the entertainer. Just when you begin to think that the flick is going to incline in to just another action comedy template movie, it unveils a twist in the plot which makes the audience invested in the flick.

Santhanam as usual with the timing of his one liners harvests applause from the audience. But still the actor has a long way to go to get in to the image of a complete lead hero. Tara Alisha Berry has made a decent debut but still not a completely convincing job. M. S. Bhaskar steals the show in the limited screen space offered to him with his dialogue delivery slang. Rest of the artists in the cast have delivered what was asked of them.

On the technical end, though musician Santhosh Narayanan has less scope to deliver in this kind of a flick, his music still helps in the romantic moments and in evoking laughter through background score in comedy scenes.

On the whole, if you forget about the logics in the film and manage to get through the first half A1: Accused No. 1 will be a good time pass with your friends.