Crime and message are the two popular, or perhaps the immediate elements that come to mind to make a film on, in Kollywood. This is the case with top film makers to the one’s that are setting foot in the industry. Thunikaram by debutant film maker Baala Sudan stands as a corroboration to it. The film threads on what happens when a ruthless child trafficker comes into the lives of an ordinary couple during their most vulnerable moment. Debutant actor Vinoth Logithasan has played the lead role in the flick. While actress Semmalar Annam has essayed the female lead role. So, how has the action crime drama come out? Will it help establish debutant Vinoth Logithasan as a bankable lead hero in Tamil cinema, and will it be a memorable debut for director Baala Sudan? To know that let us get into the movie review. 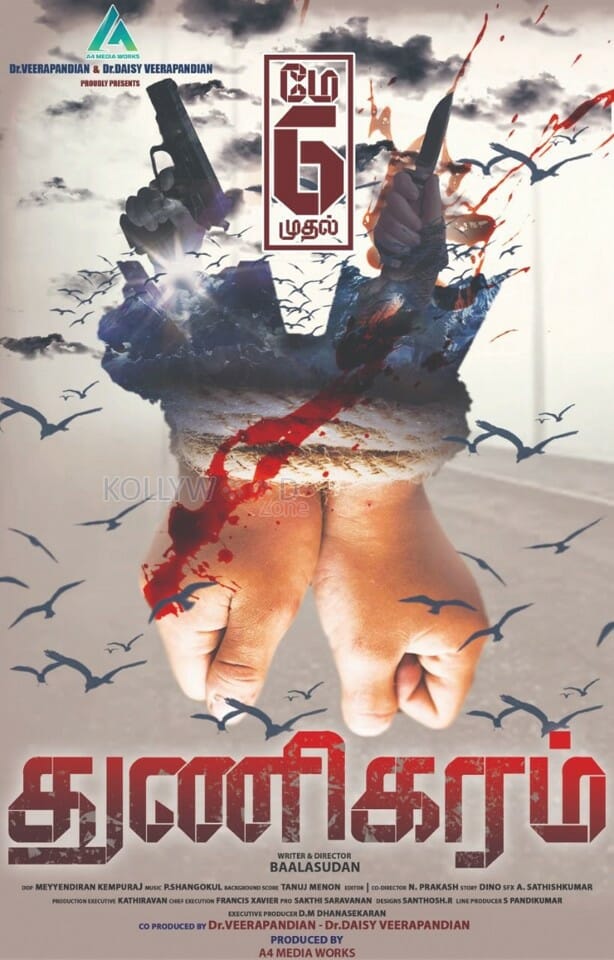 The film follows the life of Ravi (Vinoth Logithasan), a callous child trafficker who abducts children and sell them to people that deploy them in drug trades, underage sexual acts, and use their organs for illegal transplantations. Thunikaram opens with Ravi receiving a task from his boss to abduct a four-year-old daughter of a rich businessman in the city. He draws a sketch and executes the kidnapping successfully. Following it he begins to receive many such kidnap assignments which he gets done without getting caught. But several kidnappings in a short succession creates a panic in the city and naturally draws the attention of the cops. With pressure mounting on the department, a special task force is set up to handle the case. They begin their investigation but are clueless as to who is doing all the kidnappings.

In a parallel plot, we are introduced to Vasu (Bharani), a poor man who finds it difficult to make ends meet. He lives with his wife (Semmalar Annam), and his kid in a rented house. His wife has a desire to own a roof of their own. She persistently keeps nagging her husband to take a loan and get a house. But Vasu is not interested in the idea and turns her down every time she brings it up. In one instance, when she keeps pressing him about the matter, it turns into an argument. Things go out of hand when Vasu loses control and strikes her. She gets injured and their child gets nervous. Vasu immediately fetches an ambulance and transports his wife to a hospital. Meanwhile, Ravi is on his routine kidnapping spree. A tense situation prevails in the state which turns into a riot.

To escape the situation, Ravi spots the ambulance that Vasu’s family is in and gets into it along with a girl that he abducted. He threatens to kill everyone unless they act according to his instructions. Will Vasu be able to get his wife to the hospital before it is too late to save her, or will Vasu and his family survive Ravi in the first place, is what makes the rest of the story.

The script of Thunikaram might give an impression to be a story of substance on paper. But as a visual medium, it is a colossal calamity. Director Baala Sudan’s Thunikaram is a lesson on how not to make a film, or should we put it as an extended YouTube short play. Oops! Guess we could not because that would be unfair to the quality of content the YouTubers are coming out with these days. Perhaps, with the assistance of a solid YouTube team Thunikaram would have been a much better flick. It would only be safe to take a view as Thunikaram could not even get its scripting right, let alone other technical aspects of the film. The flow is excruciatingly dreary with absolutely nil conflicts. But the narration goes on and on and on simply dragging the run time.

There is a serious misconception amongst the storytellers of Tamil cinema that having some sort of message in the script is enough to sell a movie successfully. Despite this notion proved wrong numerous times, our directors remain adamant to relinquish their belief. Hence, we end up getting products like Thunikaram.

Actor Vinoth Logithasan is awful in the negative shades. He is either straight-faced or ersatz. His performance acts as a repellent factor and makes it hard for us to stay within the film. Actor Bharani over performs as usual. Actress Semmalar Annam has bagged a decent part. But struggles to live up to her role. Actress Saranya Ravichandran is just another poor performer on board. Actors Pollachi Mani, Dennis, and Perazhagi Gayathri Raja are dead weights on the ship with a mammoth hole at its center. The rest of the cast has delivered a below average performance.

On the technical front, the technical division is a complete disaster. Music director P. Shangokul is below par in handling his instruments. His tracks are not inspiring. Even his background score does not add any value to the drama. Cinematographer Meyyendiran Kempuraj frames are substandard. Even YouTube videos have better visuals these days. Editor N. Prakash lacks the fineness to cover the shortcomings in the work of his colleague.

On the whole, director Baala Sudan’s Thunikaram tries to persuade people by citing the noble message it has as its heart but fails miserably due to its awful craft.

Jai And Sunder C’s Pattampoochi To Be Released On This Date!