Tamil cinema is in a transition phase – a transition from making blatant caste-based flicks to making space for progressive anti-caste dramas. Anti-caste tone has become a unique selling point in Tamil cinema building a massive market for itself. Director K. Thamaraiselvan moves in to ride the wave with his anti-caste drama Nadhi. The film is a love story between a son of a poor auto driver and a girl of a caste chauvinist politician, and the consequences they face for falling in love with each other. Actress Anandhi who was last seen in Tamil in Kamali From Nadukkaveri is back on screens with her female lead role in the romantic drama Nadhi. Actor Karu Pazhaniappan has played a crucial role. So, how has the romantic drama Nadhi come out? Is the flick solid enough to give a break to actor Sam Jones, and propel actress Anandhi to the winning zone? To know that let us get into the movie review. 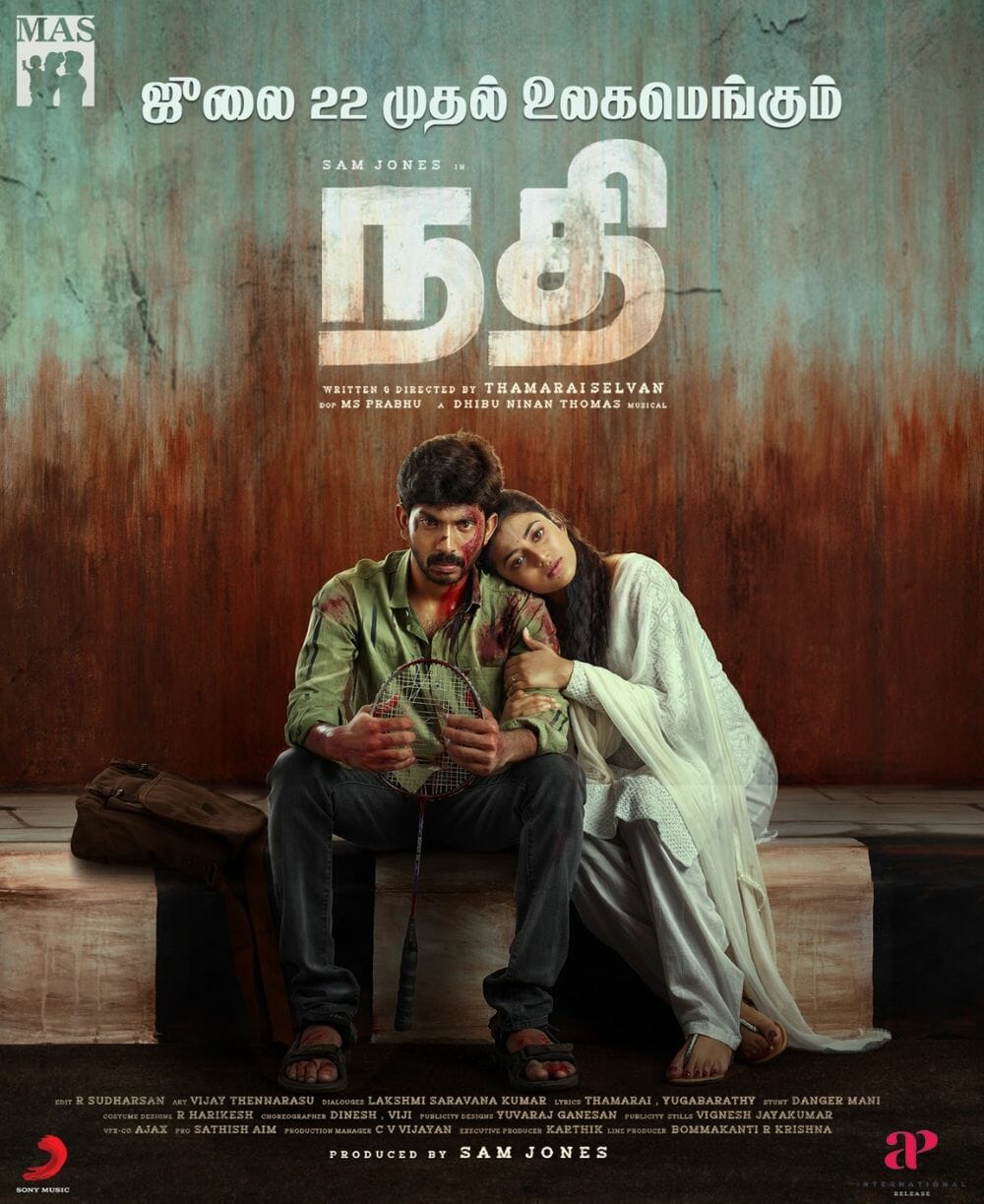 The film is set at the backdrop of Madurai where it follows the lives of Thamizh (Sam Jones), the son of Manikkam (Munishkanth), a humble auto driver, and Bharathi (Anandhi), the daughter of an influential politician from a caste chauvinist family. Both Thamizh and Bharathi go to the same college. They become friends and get along well with each other. Thamizh’s humble family background creates a soft corner in Bharathi. It does not take long for them to fall in love. When this news reaches Bharathi’s family, it does not evoke a good reaction in them. Bharathi gets ready to propose her love to Thamizh. But even before that her family concocts a plan and frames Thamizh in a murder case which becomes a sensational case in the town.

Learning about the plot, Thamizh and Bharathi seek the help of a relative Durai Pandi (Karu Palaniappan), who also happens to be a politician. He takes the issue to the media, and as in every cinema it immediately gains more traction. This further maddens the members of Bharathi’s family. Especially her uncle (Vela Ramamoorthy) who threatens to kill them both to restore his caste pride. What will happen to Thamizh and Bharathi, will Bharathi’s family accept Thamizh as her groom, and will they be able to beat all odds and end up together, is what makes the rest of the flick.

Film maker K. Thamaraiselvan opens Nadhi with a cluster of newspaper cuttings and clips on caste violence trying to set the tone of the flick right away. He then goes on to introduce his characters, and paints the background from which they hail. The family set up and happenings inside the family of Thamizh with his humorous father are endearing to watch and draw us closer to them. Bharathi’s family, in the negative shade, is the embodiment of all toxic stereotypes within influential families. Director K. Thamaraiselvan scores well in shaping the characterization of Bharathi and Durai Pandi. The first half of the film moves smoothly setting the stage well and ends with a twist. The second half begins on a dull note and soon loses track of what it set out to do, and merely becomes a tragic love story.

Director K. Thamaraiselvan’s intention with Nadhi is noble. Sticking to the current trend of anti-caste tone, he sort of tries to do a Pariyerum Perumal with Nadhi. The casting only makes his effort explicit with Anandhi giving us a robust Pariyerum Perumal hangover. But unfortunately, Nadhi does not have what the latter had, an impeccable writing. Also, there seems to be a lack of clarity over how to approach the issues that it wants to talk about. Perhaps, with a better writer on board writing all these weaknesses could have sent Nadhi down the lines of Pariyerum Perumal. But since it does not, it just ends up being a film with a contrived message deployed to earn the goodwill of the audience.

Actor Sam Jones seems like an odd man out. His struggle is evident when it comes to portraying the vulnerabilities and emotional façade of his part. His failure to sell Thamizh convincingly dampens the gravity of the drama. Actress Anandhi has bagged a meaty role. She does complete justice to her part and adds another feather to her performer hat. Actor Karu Pazhaniappan brings his flavor to the table with his effortless performance. Actor Vela Ramamoorthy is menacing as always elevating the callousness in his character to a whole different level. Actor Muniskanth serves his purpose of being on board. Actress Surekha Vani lives up to her part. The rest of the cast has delivered what was asked of them.

On the technical front, music director Dhibu Ninan Thomas songs do not stay in our memory right after they finish playing. But he adds a little value to the film with his background score. Cinematographer M. S. Prabhu’s frames are adequate. But given the quality of visuals in the YouTube videos these days, his frames should have been much better. Editor R. Sudharshan has complemented the work of his colleague with his fine scissor work.

On the whole, director K. Thamaraiselvan’s Nadhi has its heart in the right place, with little work in writing, it could have been a much better drama.