Maaran seem to have come out from a place which had no clue of how investigative journalism operates. That is why it comes as a shocker to see film maker Karthick Naren’s name beneath the story credit. Unlike his debut venture, Maaran is plain and straight. The twist it holds, up its sleeves, barely has any impact on us.

It is a common thing that film makers run in to creativity drought after five or so films. But director Karthick Naren who treated Tamil cinema audience with a fantastic debut in Dhuruvangal Pathinaaru, seems to have run in to the creativity drought right after his first venture. His sophomore flick ‘Mafia: Chapter 1’ or his short drama ‘Agni’ in Navarasa barely made any impact. Actor Dhanush who was last seen on screens in Jagame Thandhiram is back with his action thriller Maaran. Talented young film maker Karthick Naren has helmed the drama. Actress Malavika Mohanan dons the female lead role. So, how has the film come out? Is it solid enough to add weight to the actor’s list of successful flicks and be a redemption for director Karthick Naren? To know that let us get in to the movie review. 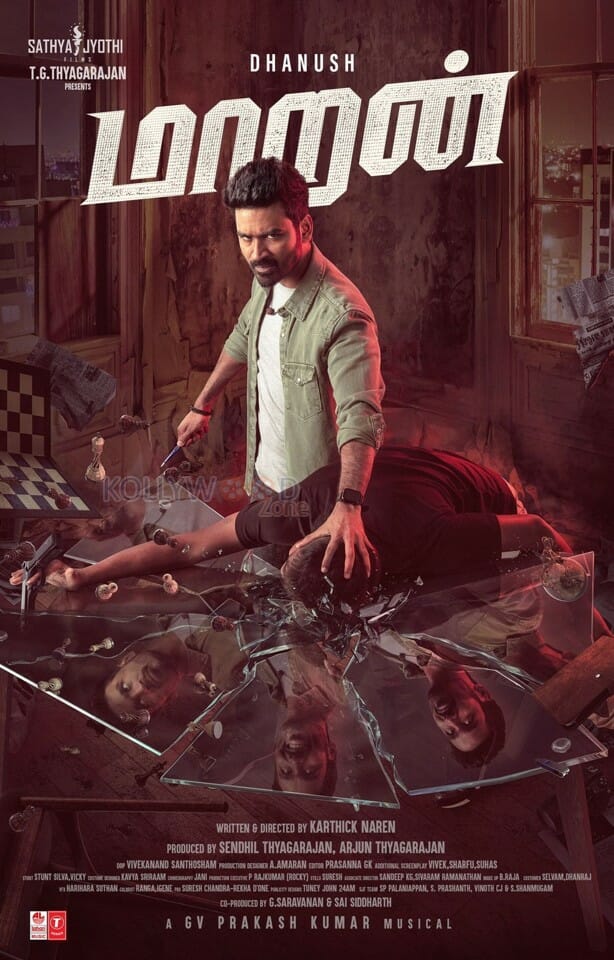 The entertainer follows the life of Mathimaaran aka Maaran (Dhanush), a young audacious investigative journalist who picks high voltage suppressed crimes and bring them to light. There is a sentiment angle to why he does it. His father Sathyamoorthy (Ramki), held the same principle and was martyred for it. As a child he had told Maaran that it is his intelligence that would save his principle of being a good man. So, Maaran grows with shrewdness we are told. Maaran shares a sweet bond with his sister Shwetha (Smruthi Venkat), whom he takes care of after their parents pass away as them as children. He is in love with his colleague Thara (Malavika Mohanan) who shares a good equation with his sister. Maaran’s uprightness often pits him against his senior editor Aravindan (Illavarasu). But the managing director of the channel, Kesavan (Jayaprakash), a friend of his father comes for his rescue. Though, he keeps advising him to play low and stay vigilant.

One day, just ahead of the elections, Maaran receives a call pointing him to look at the actions of an influential politician Pazhani (Samuthirakani). Maaran begins his investigation and figures out that Pazhani is concocting a plan to gerrymander the elections by switching EVM machines. He exposes him. Obviously, Maaran and his dear one’s are ambushed by a group of henchmen. In unfortunate turn of events, the gang abducts Shwetha. They make a video of her tied to a chair, and send it to Maaran. He gets petrified, and rushes to the spot only to find her set ablaze to death. Devastated Maaran, looses motivation in life. Yes, Thara comes in as his torch bearer, and provokes him to avenge his sister’s murder. Maaran sets up on his quest that takes a detour, and eventually leads him to Pazhani. So, will Maaran be able to take down an influential politician with his media power, or is there a twist in the tale, is what makes the rest of the story.

After watching Maaran it is hard not to wonder what the heck did film maker Karthick Naren wanted to do with Maaran. Mathimaaran has it as his life’s mission to present the truth, and only the truth to viewers in the media world. Now, if you are wondering whether is he employed or unemployed, then you can be certain Maaran is not your cup of tea. Maaran wants to sell itself as a clever piece of work, and in that pursuit seem to have gotten in to a delusional phase where it cannot decipher clever from arrogance. There is nothing right about Maaran. Because Maaran does not get even the basics right. For instance, take its lead character Mathimaaran he is just right about things, and commanding all the time. He just cracks cases for fun. World would be a lot better place if investigative journalism was only this cooler.

Maaran seem to have come out from a place which had no clue of how investigative journalism operates. That is why it comes as a shocker to see film maker Karthick Naren’s name beneath the story credit. Unlike his debut venture, Maaran is plain and straight. The twist it holds, up its sleeves, barely has any impact on us. As we audience, even after an hour in to the flick, are still waiting outside its world, contemplating whether or not to buy in to its world. The characterization is another haphazard. There is an irresistible urge to glorify its lead character at any cost. Just make people keep going on and on about Maaran. But the tragedy is, we are clueless about what feat of Maaran makes them rave about him.

Actor Dhanush is natural. But at times it feels like the star performer is trying too hard which makes him overplay his part. Actress Malavika Mohanan in just another typical Tamil cinema heroine role. Nonetheless, she lives up to it. Actor Samuthirakani is solid as a politician. Actress Smruthi Venkat has done justice to her part. Actor Ramki is effective even in a short screen time. Actor Jayaprakash and Aadukalam Naren is effective as usual. Actors Bose Venkat, Mahendran, Ilavarasu, and Ameer have all chipped in playing their part well. The rest of the cast has delivered what was asked of them.

On the technical front, musician G. V. Prakash Kumar is not at his best. His tracks are dearth of his magic while his background scores aid in enhancing the mass portions. Cinematographer Vivekanand Santhosham’s frames could have been better. Editor Prasanna G. K clips the shortcomings in the work of his colleague with his neat trims.

On the whole, it is hard to believe Maaran is from the same pen that penned down the delightful Dhuruvangal Pathinaaru. What has happened of that Karthick Naren?

Maaran is available for streaming on Disney + Hotstar OTT platform.