At a time when Tamil cinema audience are worn-out with the senseless horror comedies that kept hitting the screens almost every week, here comes Iruttu which does justice to the genre by giving the horror chills and edge of the seat moments to the lovers of the genres. Actor Sundar C who was busy with his directorial ventures is back on screens with a neat performance. Director V. Z. Durai’s clear objective to keep the script in the horror thriller zone has paid off well. Something we could not see in film makers of Kollywood lately as they seem to be obsessed with the horror comedy genre so much that it makes them to even turn a decent horror script in to a horror comedy. 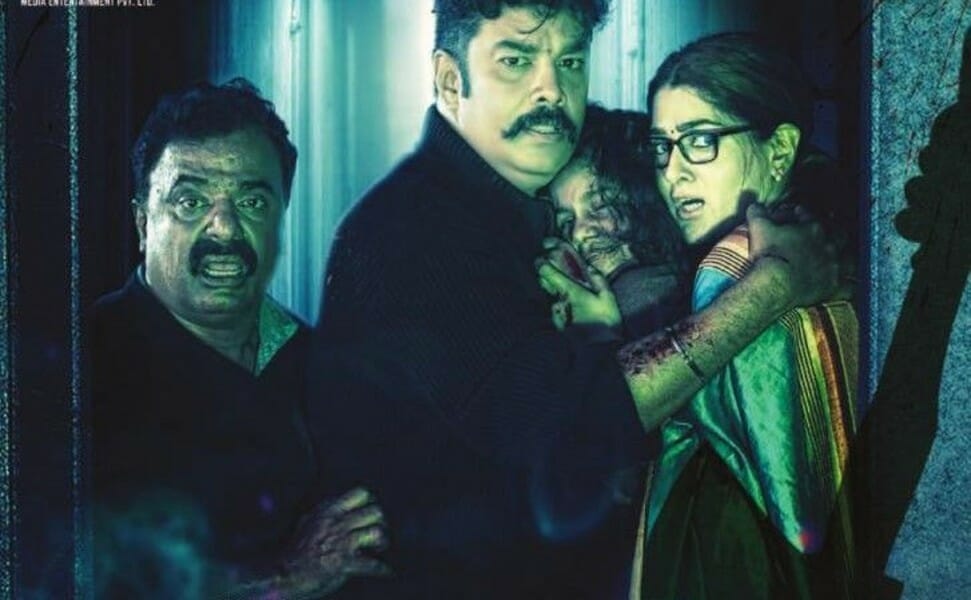 The film opens in a scenic hilly location with mysterious supernatural element which brings the atmosphere to total darkness at 12 p.m. This induces fear among the habitants of the locality and when they learn about the murder of six individuals in the locality during this time, the news adds to their fear. Things further worsen when the investigating office of the case sets himself on fire which ultimately leads to his death. The lack of finger prints on all crime spots hinders the case from taking a move forward. This brings in our hero Chezhiyan (Sundar C) a cop, who moves to the locality along with his family to take charge as the new inspector of the village. When Chezhiyan and his team start to dig deep in to the mysterious incidents that resulted in the death of many they begin to experience the presence of supernatural force. What is the supernatural force, was there really a supernatural force in town, what caused the murder of 7 individuals, and how was the village pushed in to darkness, is what makes the rest of the story.

Director V. Z. Durai cleverly gets the attention of his audience right from the very first scene of the film with a series of intriguing events which makes the audience curious. From there he gradually lays the foundation for what seems to be a big thing in the making but then even in spite of interesting elements the film dilutes to be an ordinary commercial flick. But the film maker has cooked up his script with some interesting elements neglecting the regularities like the ghosts having a sympathetic back story, ghost avenging for its betrayal, or the ghost trying to posses the lover of her partner just because it wants to be with its partner for eternity.

Actor Sundar C picks up from where he left in Aranmanai and pulls of the character without any difficulty. Seems like after the Aranmanai franchise the actor is well seasoned when it comes to the depiction of ghost handler characters. If there is one actor in Tamil cinema that could be accepted for remaining undaunted throughout a ghost film despite its horror effects, it is actor Sundar C. Lead pair Sakshi Choudhary seems to be a misfit for the character. While Sai Dhanshika impresses in the limited screen space allotted to her. Once again comedian VTV Ganesh repeats what he has been doing right from his first film yet he scores with it in few places. Child artist Baby Manasvi impresses with a stunning performance after her endearing performance in Immaikka Nodigal. The rest of the cast has delivered adequate performances.

On the technical end, the entertainer is technically sound across departments. Cinematographer E. Krishnasamy’s frames have captured the scenic beauty of the hill station while adding strength to the edge of the seat moments. E. Krishnasamy’s work is further complimented by the adeptness of music Director Girishh’s background score and the sound design of talented Vijay Rathnam. Also, editor R. Sudharsan’s racer sharper cuts deserves a mention.

Iruttu is undeniably a different endeavor amongst the regular horror films which hit the screens without purpose. The biggest scoring point of the flick is the concept of Jinn from the Muslim mythology around which the director has tried to develop an intriguing plot. Film maker V. Z. Durai’s efforts to explore an untouched region in the ghost theme must be commended. He has also succeeded in his attempt to an extent. But it is the later proceedings of the film when it inclines toward the investigative thriller that it loses the grip that it had on the audience. Little work on the investigative portions of the script could have propelled the flick to a whole different level. The investigative portions are loosely written and proceeds with ease without forcing any complexity on the lead character in cracking the hints.

On the whole, Iruttu is a horror thriller worth trying for its thrills and chills but falls short of being a complete entertainer.