It is hard to go looking for sense in films like Idiot. But the question is, is the film entertaining after we shake hands to turn off the analytical part of our brain. The problem is, filmmaker Rambhala’s Idiot does not. What are the two major components that constitute a comedy? Situation and reaction (either expressions or quirky comical lines delivered with timing) to it. Director Rambhala has got the one side of the coin right.

Uh huh . . . horror comedy again. Tamil film maker’s perseverance for horror comedy seems like an affair that is not so easy to end. Idiot opens this month’s share of horror comedy. Two staffs working in a royal family delude the members of the family in to committing suicide to rob their wealth, their progenies are left to suffer the consequences of their action. Actor Shiva who was last seen in Thamizh Padam 2 which hit the screens in the year 2018 is back to business after nearly 4 years with his horror comedy Idiot. Actress Nikki Galrani plays the female lead. Director Rambhala has helmed the drama. So, how has the flick come out? Is it solid enough to bring back actor Shiva to the winning zone? To know that let us get into the movie review. 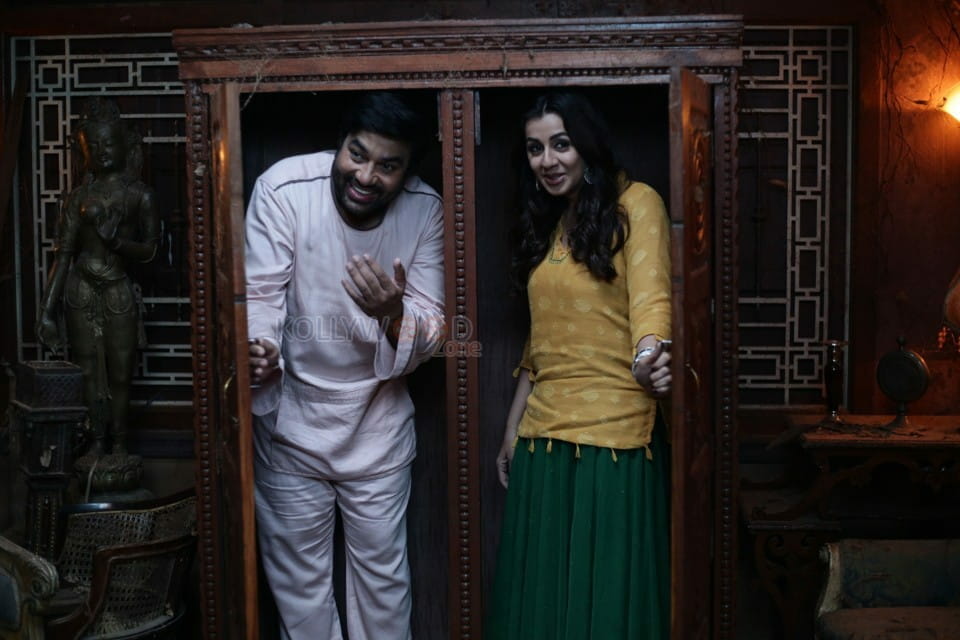 The entertainer depicts the life of Chinnarasu (Shiva). Sethupathi and Senathipathi work for a royal family. They become covetous of the family’s wealth and devise a plan to betray the family to swindle their wealth. So, they set up a ruse and get the family members to commit suicide. Decades forward, Sethupathi’s son Raasu Gounder (Anandaraj) is an inept leader who calls the shots in his village. His son Chinnarasu (Shiva) loathes him and they do not have a functional relationship. He comes around spending time lethargically with his friends. Things go haywire when he takes part in a Kabbadi tournament which his father despises. Raasu Gounder kicks him out of the house. Raged Chinnarasu gets drunk, and comes home asking for his share of the ancestral property that his grandfather looted from the royal family. Raasu Gounder hands over the key to the palace to Chinnarasu. Despite being warned not to set foot in the castle, Chinnarasu takes the key and rushes to the place. But meets with an accident on the way and becomes an amnesiac.

As a play of fate, Senathipathi’s granddaughter Smitha (Nikki Galrani), runs a psychiatric clinic. Chinnarasu, who has lost his memory, is admitted to the hospital. In order to address him, he is named as Paandi in the institution. Yes, the heroine is in the picture, so what’s next? Time for some romance. Chinnarasu falls in love with her. But Smitha merely takes him as her patience who has lost his memory. One day, Smitha’s father presents her a ring that her grandfather stole from the royal family. She wears it. Shortly after that, things get spooky. On that night, she is strangled by the ghost of the royal family. But she gets lucky as the ring slips itself from her finger. (Ghosts of Tamil cinema are very rules-abiding. They take revenge only when people are in possession of their belongings, you see.) A game of thieving is played with this ring in the hospital. Meanwhile, there is a gang waiting to kidnap Smitha. Before they could, the ghosts abduct her and take her to the palace.

The gang of kidnappers, the ghosts, Chinnarasu and his parents, and Smitha all end up inside the palace. What will happen to them is what makes the rest of the flick.

It is hard to go looking for sense in films like Idiot. But the question is, is the film entertaining after we shake hands to turn off the analytical part of our brain. The problem is, filmmaker Rambhala’s Idiot does not. What are the two major components that constitute a comedy? Situation and reaction (either expressions or quirky comical lines delivered with timing) to it. Director Rambhala has got the one side of the coin right. He shows his dexterity in setting up situations with so much scope to draw out comedy. Be it the situations in the hospital, the play he tries to do with the ring, and the portions inside the ghost bungalow.

However, he could not capitalize on what he shaped as his writing duds. His writing of the comedy is so weak that his characters look clueless on screen. It is like setting up a magnificent stage and sending in the artists without a script to perform. Even with so many comedians on board, Idiot finds it difficult to crack as a minimum, a handful of genuine comedies. Comedians try hard to infuse laughter into the flow but the more they try the more infuriating they come forth. The director himself seems to have realized this and he tries to turn Idiot into a spoof entertainer. If at least he had stayed the course, perhaps Idiot could have been a little tolerable.

Actor Shiva brings forth his natural strength of making even bad jokes sound better but director Rambhala’s writing makes his job so difficult for him. Actress Nikki Galrani in the typical ‘loosu ponnu’ character of Tamil cinema. Nevertheless, she does it well. Veteran actress Urvashi is effective as usual. Actor Anandaraj is functional. Actress Akshara Gowda is adequate. Comedians Mayilsamy, Singamuthu, Ravi Mariya, Redin Kingsley, Crane Manohar, and R. N. R. Manohar does not live up to the purpose of their existence in the film. The rest of the cast has delivered an average performance.

On the technical front, music director Vikram Selva’s tracks do not last in our memory for too long. Even his background score is middling. Cinematographer Raja Bhattacharjee should have done a better job in covering the drama. Editor Gingee Madhavan has not clipped out the shortcomings in the work of his colleague.

On the whole, actor Shiva tries hard to steer home an engine broken-down ship but, in the end, he sinks along with it.