College life brings a sweet reminiscence for most people. The college atrocities, friendships, relationships, mini rebellions against the management, and the hostel life. It is all these elements on which actor Sivakarthikeyan’s Don tries to cash in. The actor who was last seen on screens in Doctor is back with his comedy drama Don. Actress Priyanka Arul Mohan has essayed the female lead role in the film. Debutante storyteller Cibi Chakaravarthi has helmed the drama. So, how has the entertainer come out. Is it solid enough to be a memorable debut for director Cibi Chakaravarthi, and will it continue actor Sivakarthikeyan’s winning run? To know that let us get into the movie review. 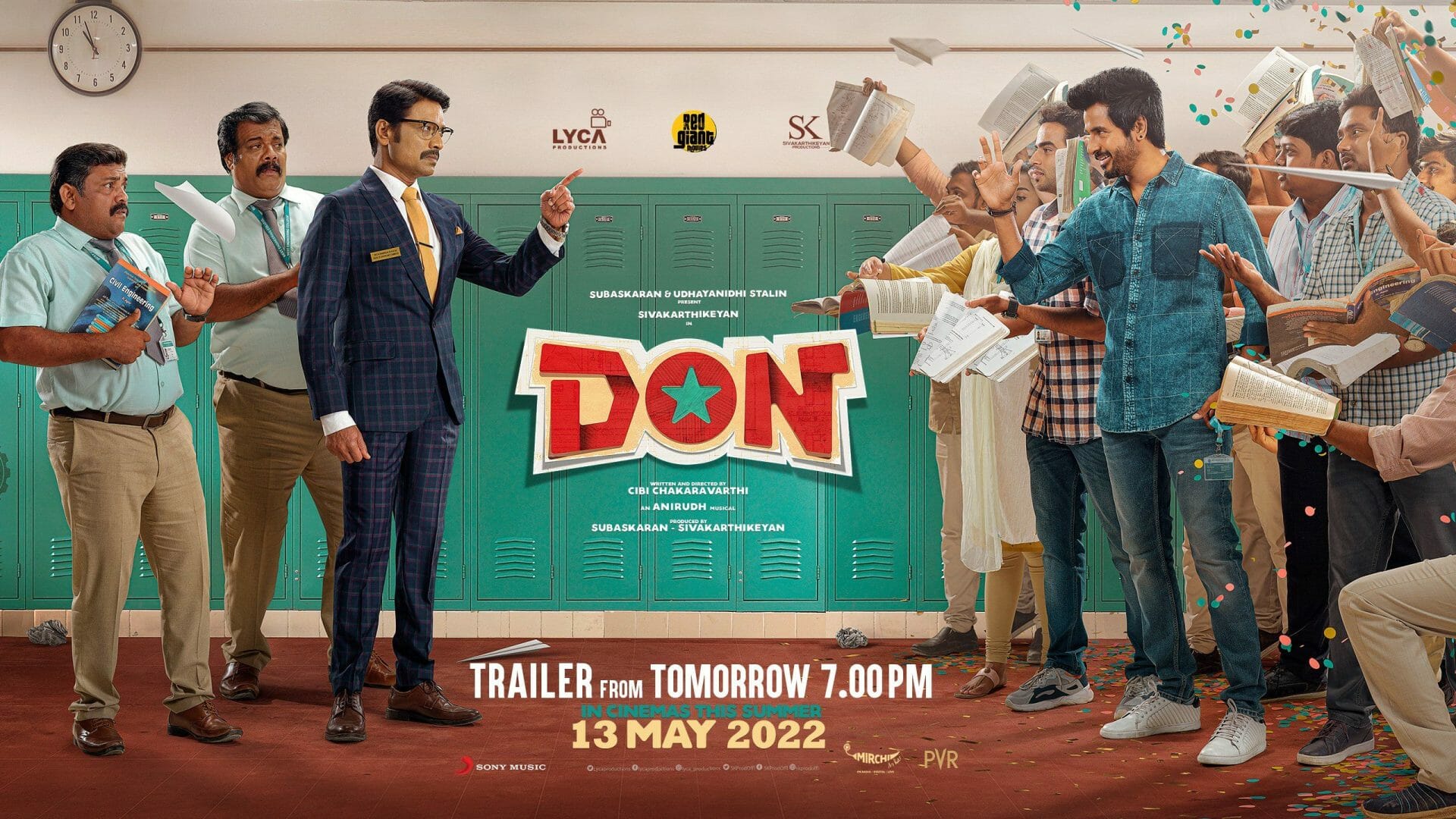 The movie follows the life of Chakaravarthy aka Don (Sivakarthikeyan), a celebrated engineering college student who is in a hunt to figure out what he wants to do with his life. When Don opens, we witness Chakaravarthy on a rush to his college. On his way he narrates to us the tale of his teenage life. In his schooling days, he falls in love with his schoolmate Angaiyarkanni aka Angu (Priyanka Arul Mohan). The matter reaches their parents. Chakaravarthy’s bossy father Ganesan (Samuthirakani) confronts Angu’s father in an insulting way. This results in their separation. Chakaravarthy joins an engineering college. Like most engineering college graduates of India, even he is not interested in doing engineering. But his overbearing father Ganesan, forces him into engineering. In college, he becomes a rockstar instantly after he packs Bhoominathan (S. J. Suryah), the discipline counsellor of the college to Russia just because he punishes a couple of students for being in love.

Meanwhile, Angu joins the same engineering college. Old vibrations fill Chakaravarthy’s memories and he tries to win her back. But she turns him down. Later through her friend Lily (Sivaangi Krishnakumar), Chakaravarthy comes to know that her father quit talking to her after his father’s hostile skirmish. Feeling guilty over the incident, Chakaravarthy comes up with a plan to unite them. and succeeds. Yep, Angu revives her love for Don. Bhoominathan returns from Russia. He comes to know of Chakaravarthy’s trick that got him sent to Russia. Naturally, raged Bhoominathan seeks payback. He tries to use Chakaravarthy’s relationship with Angu as a tool to extract revenge. But Don outdoes him. Don finally finds out that his passion is film making. He decides to take part in a short film competition. So, that he could storm in to Kollywood, and revolutionize Tamil cinema. But when Ganesan learns of his son’s inclination, he gets annoyed and end up destroying Chakaravarthy’s short film. Will Chakaravarthy’s give up on his passion and get his degree, or defy odds and become one, is what makes the rest of the drama.

Couple of decades ago, there was a trend in Tamil cinema where actors regardless of their age kept playing college students film after film. Storyteller Cibi Chakaravarthi’s Don is not just a reminiscence of our college life but a trip back to the 90’s Tamil cinema. Filmmaker Cibi Chakaravarthi attempts to rejuvenate the tried, exhausted, and rested clichés of films that have the hero playing a college student. Grandiose, unreasonable way of doing things, and hero worship is the essence of Don. Chakaravarthy attains stardom instantly when he joins the college. From then, everything is almost about him. The students, hell even the faculties, do not seem to have a life of their own, they are constantly curious about what Don is going to do next.

In the name of commercial film making Don seeks to satisfy both the young and the old audience. For the young crowd the director seems to say, look folks, you want friendships, love stories, college atrocities, intro songs, mass moments, and rebellions against the educational system? You know what here has it. In the second half, he takes the side of the old crowd and seems to say, I know, I know, you people must have been upset with these behaviors, here have the father sentiment and parental sacrifice. We all have what we want and everybody is happy. The end. This approach wreaks havoc on the final stage show lecture that the director tries to transport the audience to. Instead of focusing on the nuances and complexities, Don moves aimlessly and ends with a sentimental message. Perhaps, it is our fault to expect these elements in a film like Don.

Actor Sivakarthikeyan brings his full potential to the floor to save a film that has nothing fresh to get the audience’s attention. If not for his performance Don would have lost stream even before it began. Actor S. J. Suryah is effective as a college principal. Actress Priyanka Arul Mohan is the all-supportive bubbly girl who is always in awe of her boyfriend. Actor Samuthirakani is effective. Actress Sivaangi Krishnakumar makes a confident debut. The entertainer has a cluster of comedians. Actors RJ Vijay, Munishkanth, Kaali Venkat, Soori, Bala Saravanan, Singampuli, Manobala, George Maryan, and Raju Jeyamohan. Even with so many comedians on board the entertainer finds it awfully difficult to provide comical relief. The rest of the cast has delivered what was asked of them.

On the technical front, music director Anirudh Ravichander’s tracks are not as inspiring as his usual works. Even his background score is not any special either. Cinematographer K. M. Bhaskaran has done a decent job covering the drama. Editor Nagooran Ramachandran neatly trims the shortcomings in his colleague’s work.

On the whole, director Cibi Chakaravarthi’s Don is a half-baked and lackluster coming of age drama made bearable to an extent only because of actor Sivakarthikeyan’s dynamic self.