Thumbaa, the fantasy adventure comedy drama is crafted by a team of newcomers including the director Harish Ram L. H. Though the message that the story teller intended to tell his audience is powerful, the way of narration turns out to be dreary and fails to engage with the adult audience. However, the animal element, greenish background and the adventure factor in the film makes it a perfect entertainer for kids. 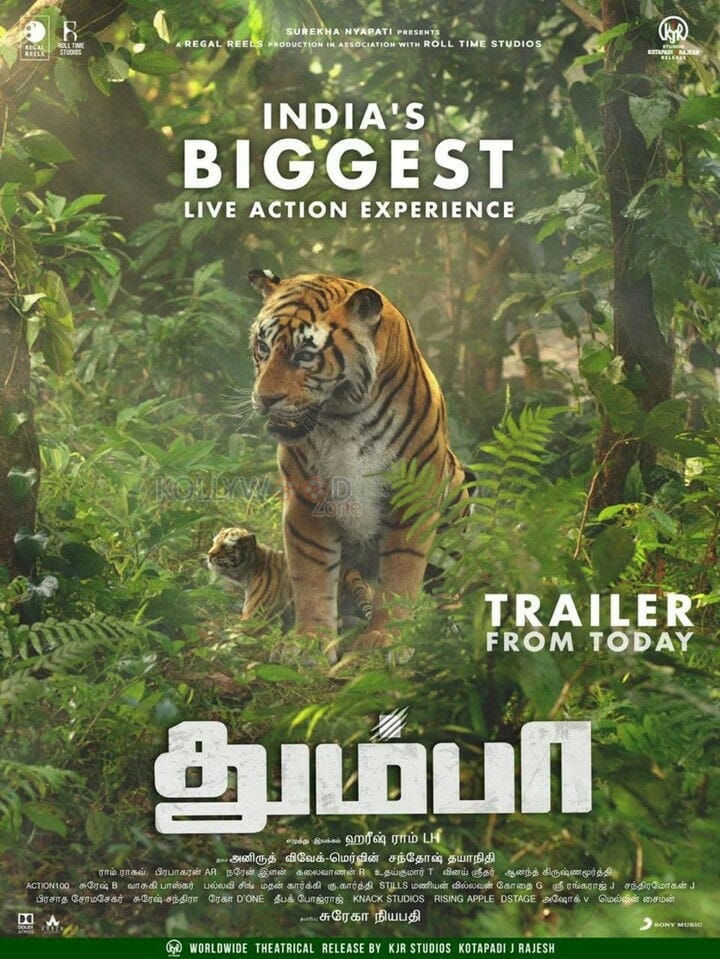 Thumbaa, is about the journey of three youngsters Hari (Darshan), Umapathy (Dheena), and Varsha (Keerthi Pandian) who comes to Top Slip zone of Nilgiris with different motives. Hari and Umapathy are painters who have come to the zone to paint an image of a tiger in the middle of the jungle. On their way to the Top Slip we get to witness some natural and scenic locations, in addition to that the impish monkey that troubles Hari and Umapathy makes the kids laugh and also a funny elephant chase adds to the fun. Then the painters stumble up on a wild life photographer Varsha who has come to the jungle on a mission to snap a picture of a real tiger. They get acquainted. Hari and Umapathy offer to help Varsha in her mission to click photographs of a tiger. Meanwhile, a tiger named Thumbaa along with her cub has crossed over to this side of the mountain range from Kerala. This is what makes the first half of the film.

Hari, Umapathy, and Varsha make it to a village where they experience the amazing life of the villagers and learn that a gang of poachers led by a forest officer are behind the escaped tiger, plotting to capture it. They also witness the way the villagers risk their own lives to save the life of the tiger. They decide to offer their assistance to them to save the tiger from getting in to the hands of the poachers. Did Varsha manage to capture pictures of the tiger, did the painters manage to paint the image of a tiger, will they succeed in their attempt to save Thumbaa from getting in to the hands of the poachers, is what makes the crux of the story.

The lead actor Darshan has delivered a very ordinary performance and at times tries to over act the situation which makes his performance quite synthetic. Keerthi Pandian as wild life photographer is cheery, bubbly and delivers a decent performance on her debut flick. Actor Dheena is probably the best addition to the cast who entertains the audience with his wonderful timing and expressions, and offers comical relief.

Almost all the animals that appear in the film are graphically designed. Though at certain places we are able to clearly witness a soft toy like appearance of animals, the VFX in the film deserves to be commend for the team’s attempt and may be it could be put in this way, ‘much better for Tamil cinema standards.’ Cinematographer Naren Elan has framed the beauty of the jungle with perfect lighting with the right blend of light and darkness to the scenes.

Director Harish Ram’s daring attempt to make a film of this genre in his very first movie must be applauded. Also, his boldness to chop off all the commercial elements like unnecessary drama, sentiments, romance is courageous. Seems like the film maker has crafted the fantasy drama with the idea of entertaining kids in his mind and he has succeeded in his attempt.

On the whole, though Thumbaa attempts to stress on the importance of coexistence between humans and animals at a time of human’s conflict with nature, the soft and plain writing makes it a complete children entertainer and has only very little to offer for the adults.

Vijay Sethupathi to pen a sports script for Vishnu and Vikranth