Manimaran has written and directed Pugazh, with lead actors Jai and Surabhi in the predominant roles. Karunaas, R.J. Balaji, Marimuthu and many have done supporting roles. The movie was ready during 2015 and due to some problem the release was delayed and after lots of hiccups the movie got released today.

The politician role was portrayed by Marimuthu and Jai has acted as a bubbling youth. In the movie the politician plans to build a factory in an area which is considered as a livelihood. How he wins is the rest of the story. The first half of Pugazh is filled with more fun and the second part moves in a different track. 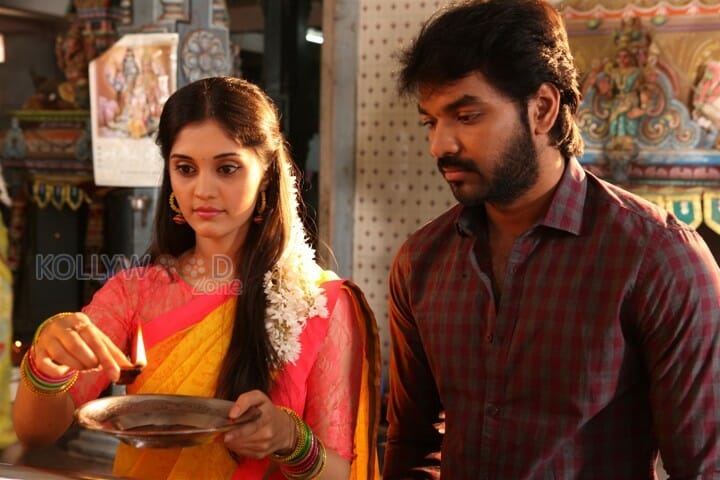 Jai was last seen in the screen for his Valiyavan during 2015. Jai has proved his individuality in the movie. He kept six packs and struggled a lot for that movie. But it failed. Now he is back with Pugazh. He starts of well with an introductory song and he danced so well. Surabhi has acted beautifully and her part is very less in the movie. R.J.Balaiji’s role is equal to that of the hero. There are not many romantic scenes and duet songs for Jai and Surabhi. In fact the screen space is so limited for the lead pair together. Karunas has once again done role of a life time. Watch out his performance in climax.

Marimuthu has enacted as a politician and he has done the baddie role to perfection . Marimuthu is the right selection to do the negative roles and his acting and body language is good. Some characters like Jai’s friend Venkat, Jai’s sister character and Minister’s relative have done their best. Vivek Shiva and Merwin Solomon have composed excellent music for Pugazh. Velraj has made a neat cinematography.

Ayngaran International has looked after the distribution work and produced under the banner Film Department by Varun Manian, Govindaraj and Sushanth Prasad. The editing work, choreography and stunt scenes are organized wonderfully. Manimaran who worked as an assistant for director Vettrimaaran made intriguing screenplay in Udhayam NH4 and he failed to do the same in Pugazh.

Overall, Pugazh is an average fare!