Films made on a shoestring budget are able to find a space to introduce themselves to the audience without any complications ever since the dawn of the OTT platforms. Pothanur Thabal Nilayam is one such film to use this space to find its way to the audience. The film is a tale about a young man who aspires to be a businessman whose dream is jeopardized after his father gets embroiled in a situation that could ruin his reputation in the town. Debutant Praveen has directed and starred in the flick. Actress Anjali Rao has played the female lead role. So, how has the entertainer come out? Is it solid enough to cast debutant Praveen as a bankable lead hero and director in Tamil cinema? To know that let us get into the movie review. 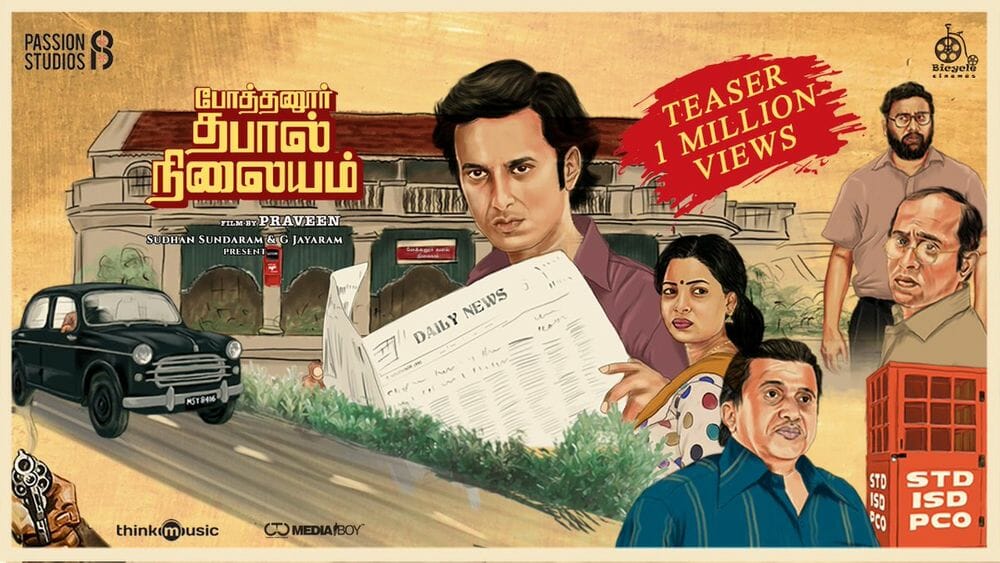 Pothanur Thabal Nilayam, set in the early 90’s, follows the life of Praveen (Praveen), an ambitious computer engineer who is drawn to computers from a young age. His father Venkat Raman (Jagan Krish) sends him to the US, so that his son could get the best tutoring in the field. Praveen completes his degree, and works there for a while. Eventually, he decides to return to his hometown in Tamil Nadu with an idea to start a business involving computers. But the problem is, computers have not made their way into Indian markets, and were not really a thing back then. To whomever he discusses his business plan, they respond cynically just at hearing the name computer. People do not entertain Praveen’s business proposal, and no one comes forward to invest in his idea. So, he decides to apply for a loan. By being persistent, he manages to convince a bank manager to lend him a loan.

Meanwhile, he reconnects with his best friend Sanga Pillai (Venkat Sundar), whose sister Mirthula (Anjali Rao) he is in love with. When everything is set and ready to take off, fate steps in and rolls its dice. In an unexpected turn of events, a huge sum of money is stolen from the post office locker to which Praveen’s father Venkat Raman is in charge. Venkat Raman makes up his mind to inform his higher officials, and take responsibility for the burglary that happened under his watch. But Praveen convinces him to not act on it by promising him that he would find the culprit behind the theft. Things go wild when the loan that was supposed to be granted to him gets delayed due to a trivial issue. That makes Praveen to take a drastic path. In order to save his father’s reputation, and as a means to keep his hopes of starting a business alive, Praveen decides to take it upon himself to solve the crime. He ropes in Sanga Pillai and Mirthula as his associates.

Will Praveen be able to solve the crime on time and prevent his father from going to prison, and does he succeed in his attempt to set up a computer business, is what makes the rest of the flick.

Heist thrillers are always fun to watch. On that note, Pothanur Thabal Nilayam set in the early 90’s when landline, letter communications, radios, scooters, fiats, were the dominant tech players, offer us a nostalgic trip. The post office environment, its daily operations, the conservative approach to accepting computers, and of course the vintage dressing are a fine milieu to watch a heist take place. Director Praveen smartly puts this element to his own advantage. He creates situations around the evolutionary perspective to draw out comedy by juxtaposing the scientific progressions of both times. These portions work well and are genuinely entertaining. For a film made on a shoestring budget, the film has a fine artistic sense. For instance, the way Praveen explains his past through the aid of the Pac Man game that was popular during the times. We witness many such plays throughout the film.

Unfortunately, that is all Pothanur Thabal Nilayam has for us up its sleeves. Seeing it through the lens of craft, it is crowded with loopholes that are too much to stomach, convenient writing, and weak screenplay that makes it difficult for us to stay invested in the film. Looks like the film maker was so obsessed with the presentation of his work that he has directed excess focus to get it right rather than the actual substance. Perhaps, director Praveen seems to have believed that it is enough to propel his drama across the line. But it turns out it is not. As it is the case now to leave the audience by hinting at a subsequent part like the ones in Pushpa, KGF, even Pothanur Thabal Nilayam ends with setting up the stage for its sequel.

Actor Praveen is apt as Praveen. He manages to pull off his character despite his inadequacies. Actress Anjali Rao has bagged a decent part and has done justice to her role. Actor Venkat Sundar is adequate. Actor Jagan Krish is effective. Actor Seetharaman lives up to the purpose for why he was brought on board. The rest of the cast has delivered what was asked of them.

On the technical front, music director Tenma tracks are functional. Even he adds value to the film with his background score. Cinematographer Sukumaran Sundar has placed the camera at best angles to cover the drama. But there is a short film vibe in the visuals. Not sure whether it was intentionally done to generate the vintage effect, or the consequence of budget constraints. Director Praveen himself has edited the flick. He should have put his scissors at the right spots.

On the whole, director Praveen’s Pothanur Thabal Nilayam is an interesting attempt but gets sloppy due to substandard execution.