Ever since Arun Vijay’s Boxer was officially announced the expectations on the project is very high unlike any other films in the career of the actor. The anticipation further hiked for the sports drama when the actor shared a video of him training hard in Vietnam on mixed martial arts at the Lein Phong training center. The actor is quite confident that the sports drama will be a milestone film of his career. The flick has gone on floors and the unit is busy shooting the project. 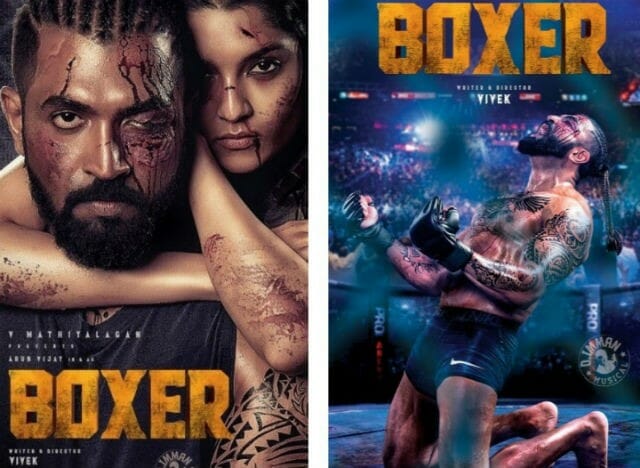 Meanwhile, two first look posters of the sports entertainer was leaked on online recently and was then officially unveiled on the social media in an unexpected manner, without prior intimation. Taking to his twitter account the music director of the project D. Imman shared the first look posters of the flick officially after it was leaked. Later, speaking about the unannounced launch of the first look posters actor Arun Vijay stated that there were no plans to launch the first look poster this week and it was leaked on online prior to the official launch. In the poster actor Arun Vijay looks deadly as a UFC boxer sporting a braided hairstyle and seems to celebrate his victory by kneeling. In another poster the actor appears with Ritika Singh where both the actor appears with sustained injuries, with Arun Vijay viciously injured in the eye.

Irrespective of the way the first look posters were launched it has got the fans further charged up and they are eagerly speaking about it on social media. The sports entertainer which is directed by film maker Vivek Kannan for sure has enjoyed a good share of publicity and has garnered necessary attention just in its beginning stage. We will have to wait to see what the tough sports drama has to offer us. Speaking about the first look poster, actor Arun Vijay has gone emotional stating that what the fans look in the posters are his nine months of hard work. Earlier in the week, the first look poster of the actor’s another film Mafia which is in the making under the directorial of Karthick Naren hit the internet and enjoyed a good reception among the audience. Seems like the actor who begun this year with the block buster Thadam, is escalating at a faster rate to cement his place as a solid bankable hero of Tamil cinema.

While Markus will be seen behind the camera, Madan will be handling the editing department of the movie. The motion picture is set to be bankrolled by V Mathiyalagan under the banner Etcetera Entertainments. Actress Sanjjana Galrani recently brought on board for the venture.

On the work front, the actor is currently gearing up to begin shooting for his next venture Mafia. Shortly after which he will begin the second schedule shoot for Boxer. Apart from these projects the actor has Agni Siragugal under the direction of Naveen of Moodarkudam fame, in which he will be sharing the screen space with actor Vijay Antony.