The buzz around Aadai seems to be very difficult to be put out for the past couple of weeks. Ever since the first look of the flick was launched on social media it has created a storm equally powerful to that of thunder storms among the cinema goers, particularly down south of the country. While many stars from the industry including directors Parthiban, Venkat Prabhu, and actors Atharvaa, Taapsee Pannu, Aishwarya Rajesh, Manjima Mohan, Samantha Akkineni and musician Anirudh Ravichander applauded the actress for her bold attempt, many people expressed their discomfort over the poster and stated that the freedom of film making should not be misused. 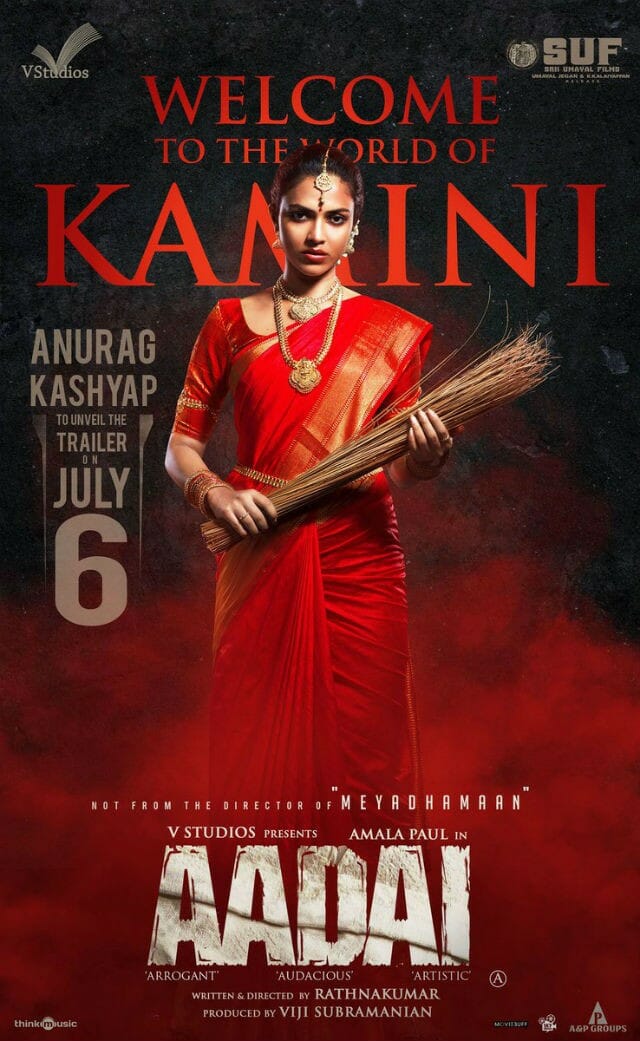 While, the debate over the poster was still on, the teaser of the film was launched by Bollywood producer and director Karan Johar, which had actress Amala Paul totally in the nude avatar which further intensified the flames burning around the project that were already too bright. Now, actress Amala Paul has announced that the trailer of Aadai will be unveiled by Bollywood ace film maker Anurag Kashyap. Taking to her twitter handle the actress has shared a poster from the movie along with the news, ‘Can’t contain my excitement! My favoritest Anurag Kashyap will present Kamini to the world by unveiling Aadai trailer. Don’t miss out.’ The trailer of the film is set to hit the internet on 6th of July.

In the poster shared by the actress, Amala Paul appears with caring a broom in her hand dressed up in raw traditional attire. In the background of the poster we are able to see a welcome message, ‘Welcome to the world of Kamini.’ Director Rathna Kumar indicates that this venture will in no way be similar to his previous venture Meyadhamaan. The director clearly points that out in the poster by stating, ‘Not from the director of Meyadhamaan.’ Whatever marketing strategies that the marketing team of the drama has implement, has sure worked out well in favor of them. We will have to wait to see whether their favors bear fruit.

Director Rathna Kumar received critical acclamation from the audience as well as from the critics for his first project Meyaadha Maan. But the film maker has stunned the audience by coming up with a complete adult rated content in his second flick. Aadai is said to be a women centric crime thriller drama and is said to lay lights on various issues that the working women face in the modern society. We will have to wait to see whether the story teller shines in his attempt to speak about the issues around women.

The project is expected to hit the screens next month. With the few first look posters and teaser, creating a lot of buzz in the cinema world, the trailer is expected to add fuel to the already burning fire.

Kashmora will be a turning point in Karthi’s...

It was Bairavaa’s Production Team who cancelled audio...