Home Kollywood News Devi 2 Trailer: The film promises to be a crowd pleaser

Ever since it was announced that there will a sequel for the super hit flick Devi that hit the screens in the year 2016 under the directorial of A. L. Vijay starring Prabhu Deva and Tamannaah Bhatia, the news has been creating quite a buzz among the fans of the flick. The first look and teaser of the film further upped the expectations for the film. Now the trailer of the film has hit the internet and from what we witness the film promises to be a crowd pleaser which has the potential to take on the audience to a laughter filled scary ride.

In the prequel of the film we saw the ghost Ruby possess actress Tamannaah Bhatia whereas in the sequel we get to see Prabhu Deva being possessed by ghost. Unlike in the prequel the ghost that has possessed Prabhu Deva seems to have turned him in to a ladies’ man as we get to see an arbitrary girl on the street find him attractive. To pump the curiosity element in audience the makers have revealed that the actor is possessed by two ghosts with whom he has signed a joint contract possibly. In order to get the attention of the youngsters in the state the strategy team has added a glimpse of the song ‘Ready Ready’ in which Tamannaah Bhatia looks damn hot and makes attempts to seduce her own husband. The trailer ends with Prabhu Deva’s head doing 360 degrees turn. 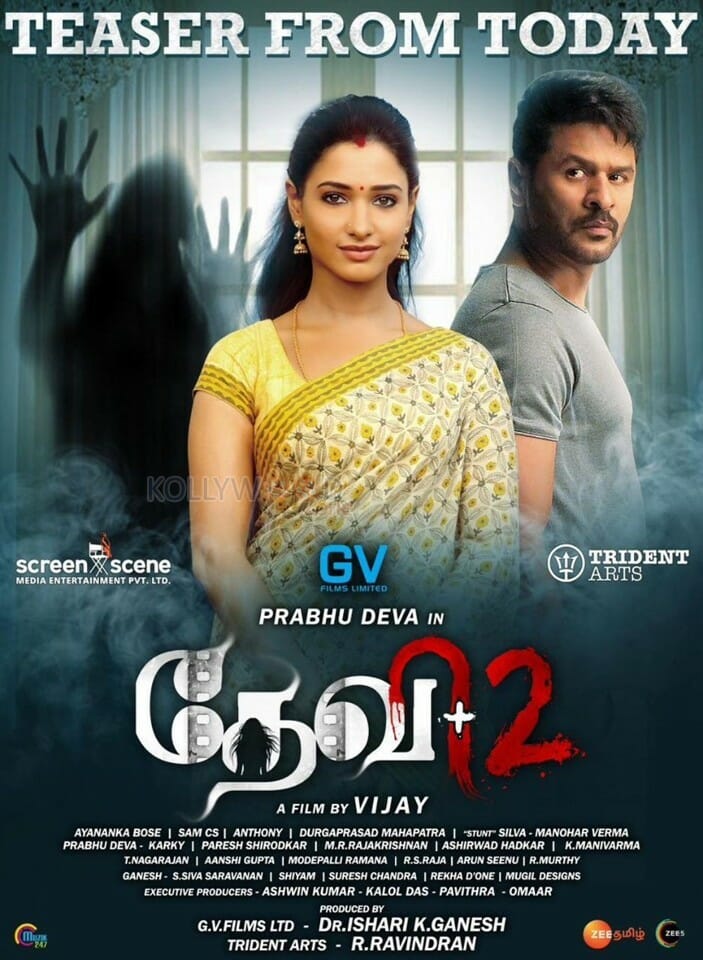 We also have comedy actress Kovai Sarala as the comical relief but seeing her gabbing in fear of ghost film after film make it slightly tiresome. Apart from Prabhu Deva, Tamannaah Bhatia, and Kovai Sarala the film has Sonu Sood, Nandita Swetha, RJ Balaji, Jagan, Nasser, and Guru Somasundaram essaying various other supporting roles. The film is set to hit the screens as a bilingual release in Tamil as well as in Hindi. While music director Gopi Sundar will be composing the music for the Tamil version, Tanishk Bagchi will take of the musical department for the Hindi version. The film is bankrolled by Ishari K Ganesh and R. Ravindran.

The film was supposed to hit the screens on 12th of April but due to some unknown reasons it was postponed to 31st of May. Now Devi 2 will go head on with Surya’s NGK which will be hitting the screens on the same day. NGK is one of the most anticipated films of the year, so we will have to wait to see whether Devi 2 has got the potential to outdo NGK in the box office collection.

Arun Vijay’s Borrder To Hit The Theaters On...