Actress Sameera Reddy is quite popular among the South Indian cinema audience for her role as Meghna in the life drama Vaaranam Ayiram  which hit the screens under the directorial of director Gautham Vasudev Menon starring actor Surya. Later, the actress went on to steal the hearts of the youths in the North with her steamy scenes in the adult flick Musafir starring Anil Kapoor. The crime thriller put her in the limelight and ensured to bring in more projects to her door steps not only from Bollywood but from many regional languages as well. The actress has acted in many regional language films including Tamil, Telugu, Malayalam, Hindi, Bengali and Kannada. 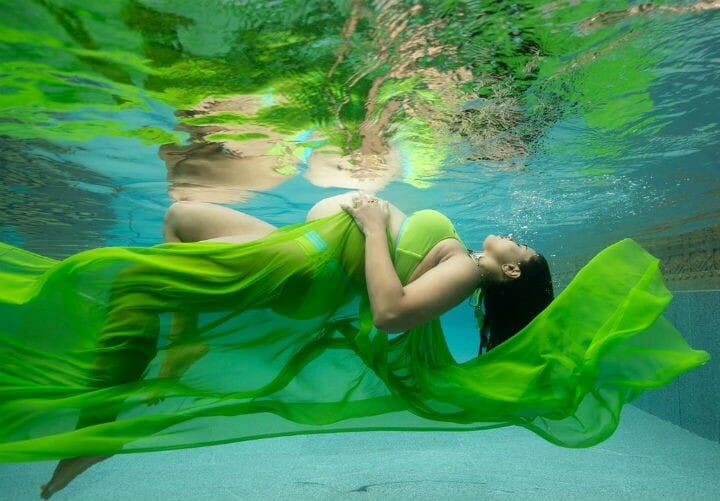 The actress without much news abruptly went under the wedlock with the Mumbai based businessman Akshay Varde in the year 2014 and the couple have a son. The actress decided to stay away from the film industry after her marriage but that never stopped her from treating her fans on her social media account with some hot and glamorous pictures of herself. Currently, the actress is 9 months pregnant with her second child but even in spite of that the Vedi actress manages to remain very active on her Instagram account and shares all her special moments of her life experience exclusively for her fans.

Last month, the actress had shared few photos of her in bikini exposing her baby bump from a beach, while the pictures had a good reception among her fans, it did not incite a similar reaction in the other camp. But the actress seems to be in no mood to listen to what people has got to say on what she has to do and do not. Now, the actress has recently shared the photos from her underwater maternity photo shoot in which the actress looks absolutely in tranquility. Sharing many pictures from the shoot the actress has captioned them with love. One particular caption goes, ‘I wanted to celebrate the beauty of the bump in my 9th month. At a time when we feel the most vulnerable, tired, scared, excited, and at our biggest and most beautiful? I look forward to sharing it with you guys and I know the positivity will resonate because we all are at different phases of our lives with unique sizes and we need to love and accept ourselves at every level.’

The photos shared by the Nadunisi Naaygal actress are so adorable, inspiring, positive, and rightly so it has gone viral on social media. The fans of the actress are full of praises for her decision to celebrate her maternity state with pride and boldness. While the photos did not have a positive response among some internet users who expressed their discomfort over the shared pictures the actress seems to be in no time to give her attention to all that. It is absolutely delightful to see the actress enjoy her maternal stage to its fullest and we wish the actress eternal happiness and a successful delivery.