Kennedy John Victor, the dashing actor is quite known for his classy performances in Anniyan, Bheema, and Iru Mugan. The actor is back again with another classy entertainer in the form of Kadaram Kondan. The trailer of the film recently hit the social media and has sent the fans in to the awe state. When the first look of the flick hit the internet, the actor’s stun physical transformation and his stylish tattoos on his biceps garnered the attention of Tamil audience. Ever since the launch of the first look poster the anticipation level for the action drama has sky rocketed. Not only the fans of the actor but also the movie buffs in the state are intrigued by the first look and are eagerly waiting for the flick to hit the screens. 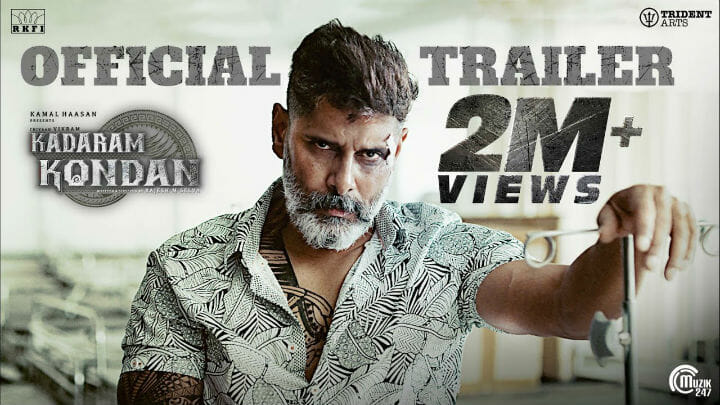 Now actor and producer of the film Kamal Hassan, has launched the trailer of Kadaram Kondan in the trailer launch event held in a star hotel attended by actors Vikram, Akshara Hassan, Lena, and Abhi Hassan, and later in the day on social media as well. Taking to his twitter account the actor has shared the trailer of the flick which unfolds with pregnant Akshara Hassan sharing an intimate moment with her hubby Abhi Hassan. The scene then cuts to a house invasion lead by actor Vikram who goes by the name KK, where he abducts Abhi Hassan. Then we are able to witness mind blowing high octane action sequences well choreographed taking place in the Malaysian soil.

Actor Vikram plays a former paramilitary commando of Indian force in the venture which promises to be high on action. The actor’s last outing Saamy Square did not fair in the box office. But the actor is said to have high hopes on Kadaram Kondan and is confident that the venture will again bring him to the profitable zone. The film was initially planned to be release in the month of May but it has been delayed and now the cop action entertainer is slated to hit the screens on 19th of July. The flick is set to hit the screens as a bilingual release and the Telugu version of the project is titled as Mister KK.

Touted to be an action thriller film, it is directed by film maker Rajesh M Selva who made his debut in Kollywood through the movie Thoonga Vanam which had versatile actor Kamal Hassan and Trisha Krishnan in the lead roles. The motion picture is bankrolled by Kamal Hassan under his home banner Raaj Kamal Films International partnering with R. Ravindran of Trident Arts. The music for the film will be composed by M. Ghibran who was also the music director for Thoonga Vanam. While Srinivas R Gutha has been behind the camera for the film, Praveen K. L has handled the editing department.

On the work front, actor Vikram is currently busy shooting for his next project Mahavir Karna under the diretorial of R.S. Vimal. Besides this project the actor has Mani Ratnam’s ambitious epic historical fantasy film Ponniyin Selvan in his kitty and Dhruva Natchathiram awaiting release for some time now.

The Hollywood Debut of Dhanush is titled ‘The Extraordinary Journey...