Actor Vimal who had been struggling to bring his ventures to theaters for a long time opted for the OTT route with his web series Vilangu. The actor seems to be regaining his momentum back in the industry and has signed a good number of films again. The Kedi Billa Killadi Ranga star is currently shooting for his upcoming drama. The project is helmed by storyteller Martyn Nirmal kumar. Now, the production unit has unveiled the title and first look poster of the flick on social media. The movie is christened as Deiva Machan. Taking to his official twitter account, actor Vijay Sethupathi shared the first look of the flick, and wrote, “Happy to share the first look of Deiva Machan.” Here is the post made by the actor. 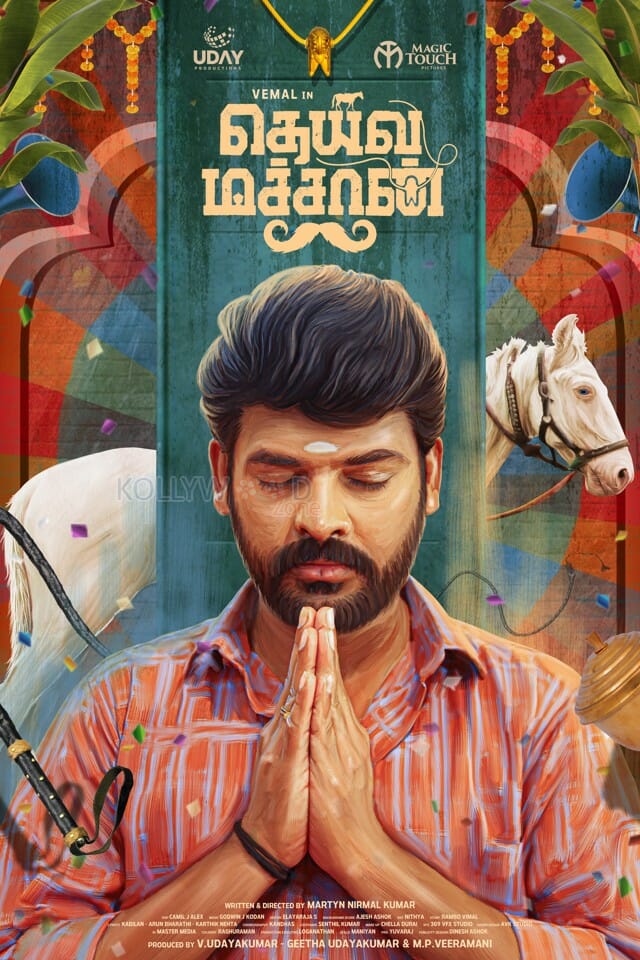 In the first look poster, actor Vimal is seen in a lined formal shirt offering prayers with a white horse in the background. The director of the film has revealed details regarding the entertainer. Talking to a leading daily on why the title, the storyteller stated, “There is a special bond shared between Vimal and his brother-in-law (machan in Tamil) in the narrative. Hence we decided to go with the name.” Revealing about the plot of the movie, the story teller said, “This is a rural drama. It will have the brother sister sentiment as its heart. Actor Vimal plays the brother of actress Anitha Sampath in the flick. The first half of the story will be about the affection between the brother and sister. The second half will deal with how the brother gets his sister married. The second half will be high on wedding vibe.” Speaking about the horse in the background of the first look poster, he said, “The horse plays a significant role in the film. The suspense will be broken in the trailer.”

Apart from actor Vimal, the film has actress Neha Jha in the female lead role. The casting department of the drama has actors Vathsan Veeramani, Bala Saravanan, Pandiyarajan, Aadukalam Naren, Muruganantham, Vela Ramamoorthy, Thangadurai, and Anitha Sampath essaying various other supporting roles. Music director Ajesh will be scoring the background score for the entertainer while musician Godwin J Kodan will be composing the songs of the flick. The cinematography department will be taken care of by cinematographer Camil J Alex. The drama will be edited by Elayaraja. The movie is funded by Udaya Kumar, and Geetha Udaya Kumar under the banner house Uday Productions along with M. P. Veeramani for the banner house Magic Touch Pictures.

On the work front, actor Vimal who was last seen on screen in the web series Vilangu is currently busy shooting for multiple projects simultaneously. He is shooting for the venture named Enga Pattan Sothu under the direction of film maker A. Sarkunam in which he will be sharing the screen space with actress Anicka Vikhraman, for Manjal Kudai helmed by story teller Sivam Rajamani in which he will be seen alongside actress Shirin Kanchwala, and for Kulasami directed by Saravana Sakthi in which he will be romancing actress Tanya Hope. Completing these flicks, the actor will begin shooting for Thudikarangal directed by Veera and Lucky. Apart from these ventures, the actor has his long-delayed movie titled Sandakkari filmed by R. Madhesh awaiting release.

Audio And Trailer Launch Of Kamal Hassan’s Vikram To Happen On This Date!

C Sathya to Give Music for Vikram Prabhu’s...