Sunny Leone is a magical word of youths throughout India. The Canadian born Indian-American actress rose to fame in India after being a participant in Hindi Big Boss hosted by superstar Salman Khan. In the year 2014 film maker Saravana Rajan brought the actress to Tamil cinema to do a hot item number in his movie Vadacurry. The actress shook her legs with actor Jai for the song, “Low Aana Lifeu.” The news of the actress in the song was the talk of the town. Naturally, despite an average musical the track got hit. Now, we have an interesting update on the actress’s next Tamil project.

Nearly after 8 years actress Sunny Leone is all set to make her return to Tamil cinema as a lead heroine through the flick OMG – Oh My Ghost which is set to be directed by story teller Yuvan of Sindhanai Sei fame. The shooting for the entertainer in happening in full fledge. Now, the production house has dropped the first look poster of the flick on social media. Actor Vijay Sethupathi took to his official twitter account and shared the first look poster of the flick and wrote, “Happy to share the first look of Sunny Leone’s OMG. Congrats team.” Here is the post shared by the actor. 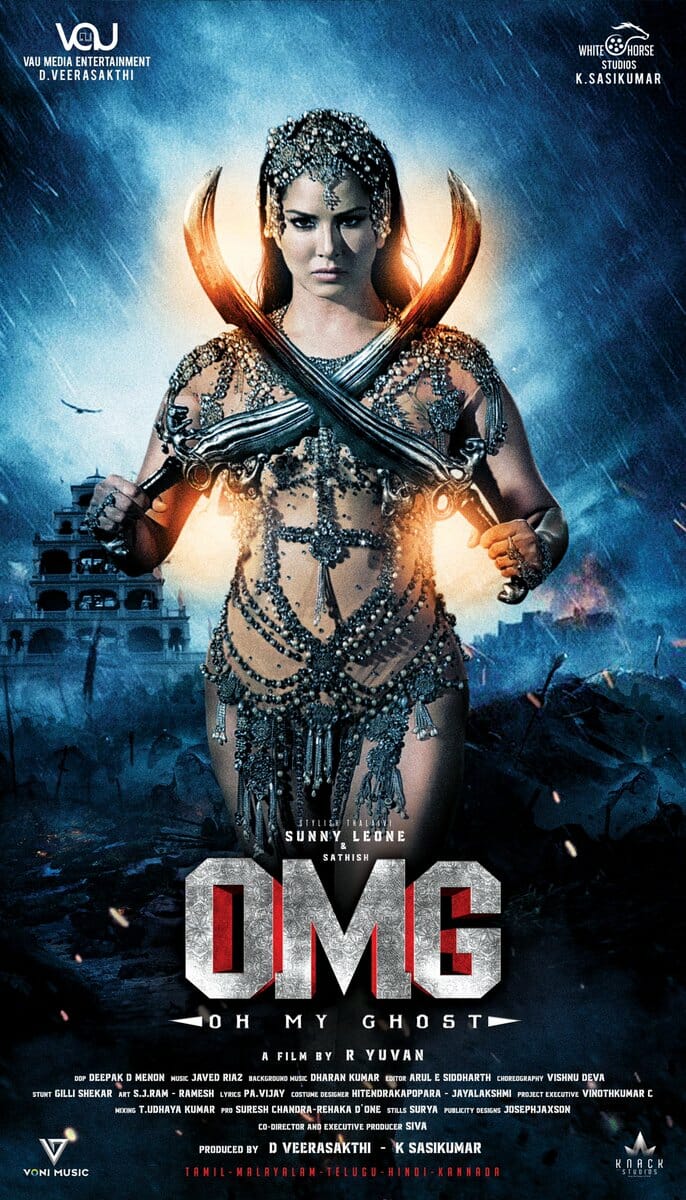 In the poster the actress is seen with swords in both her hands with a raging look on her face. Talking about the film, the director said, “The drama switches between the ancient period and the present day. Actress Sunny Leone will be seen in the role of an arrogant queen. The interesting aspect of the character is it is the hero and the villain.” Speaking about the performance of the actress, director Yuvan was full of praises for the star. “She is a down to earth person. She began to prepare for her role a month before we started to shoot. She is always eager to go for retakes if the scene did not come out well. The actress is learning Tamil. We are in plans to get her to dub for her part.”

Apart from actress Sunny Leone the film has actors Sathish, Yogi Babu, Sanjana Singh, Tiger Thangadurai, Thilak Ramesh, G. P. Muthu, and Cook with Comali fame Dharsha Gupta in various other supporting roles. The music for the drama will be composed by musician Javed Riaz. The cinematography department has been handled by cinematographer Deepak D. Menon. Editor Venkat Rajen has trimmed the entertainer. The film is funded by Veera Shakthi under the banner house Vau Media Entertainment along with K Sasi Kumar of White Horse Studios.

On the work front, actress Sunny Leone who was last seen on screens in a special number in Motichoor Chaknachoor is currently busy shooting for multiple ventures across multiple languages. The actress is shooting for her next Tamil venture Veeramadevi under the directorial of story teller Vadivudaiyan in which she will be seen in the lead role. She is shooting of her Malayalam dramas Shero helmed by film maker Sreejith Vijayan, and for Rangeela under director Santhosh Nair. Apart from these projects she has a couple of Telugu drama christened Koka Kola directed by T. L. V. Prasad, and Helen helmed by Saurabh Choudhary, and a hot item number in The battle of Bhima Koregaon.