Actor Simbu was last seen on screens in the mass action entertainer Vantha Rajavaathaan Varuvaen which hit the screens under the directorial of story teller Sundar C. The flick put on a flow show and did not do well commercially as expected. And the reports of recent development that we get on the actor’s next venture is also not so promising for the actor as the much anticipated political drama Maanadu is said to be put on hold. But the actor is not bothered about anything and is busy with his works at hand. Now, we have an interesting news on the actor’s singing line of business. 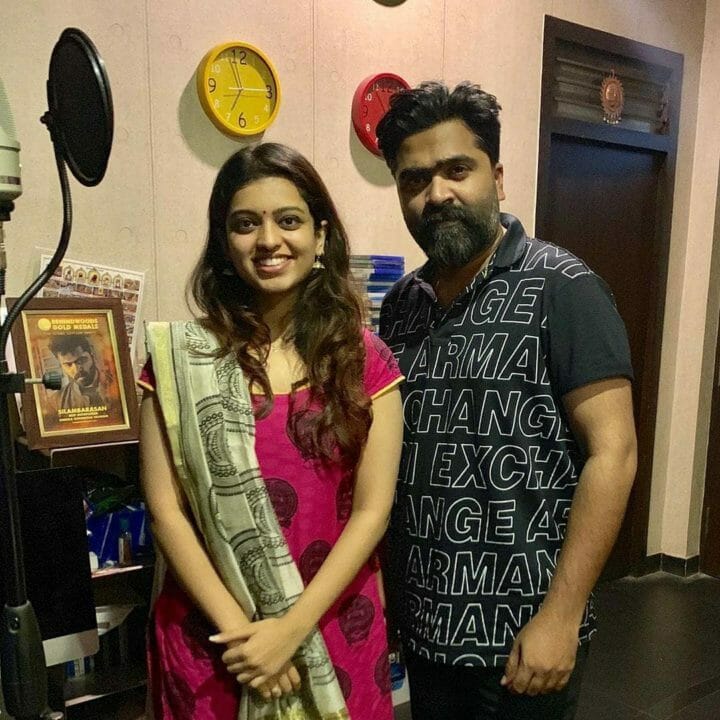 We all know that actor Simbu is a multi facet artist of Kollywood who can act, dance, sing and compose music. Now the actor has turned singer once again for his buddy Siddharth and has crooned a song for him under the composition of music director Nivas K prasanna. Playback singer Sanjana Kalmanje has shared a picture taken during the song recording and has publicized the news on social media. The details of the project are not known yet but we have reports that it is for actor Siddharth’s next Tamil movie. Guess we will have to wait for some time to get further updates on the flick.

The news has sent the fans of actor Simbu in to a frenzy state. They have been waiting for a long time now to see their favorite star in a solid block buster film in which he plays the solo lead role. The actor’s last solid hit as solo lead was the breezy romance drama Vinnaithaandi Varuvaayaa directed by Gautham Vasudev Menon which was released way back in the year 2010. After which he is yet to deliver a single solid hit with him as the solo lead hero. The actor who went through some rough times made his comeback through auteur Mani Ratnam’s directorial Chekka Chivantha Vaanam which enjoyed a terrific commercial success. He also made a cameo appearance in the controversial adult drama 90 ml which had actress Oviya in the lead role.

On the work front, the status of the actor’s next project Maanadu which was supposed to be directed by film maker Venkat Prabu is still not clear and the director has got busy with the pre production works of his debut web series which he will be directing for Star Networks. The actor will next be seen on screens in his ex girlfriend Hansika Motwani’s 50th film Maha in which he has done a cameo role. Apart from these flicks the actor is also busy shooting for the official Tamil remake of super hit Kannada Movie Mufti in which he will be sharing the screen space with actor Gautham Karthick.