Kamal Haasan and Rajinikanth may have gone through a bit of a rough patch over politics recently, but it seems like the two superstars are finally mending ways and coming close to each other as it was evident form the tweets exchanged between the two stars. 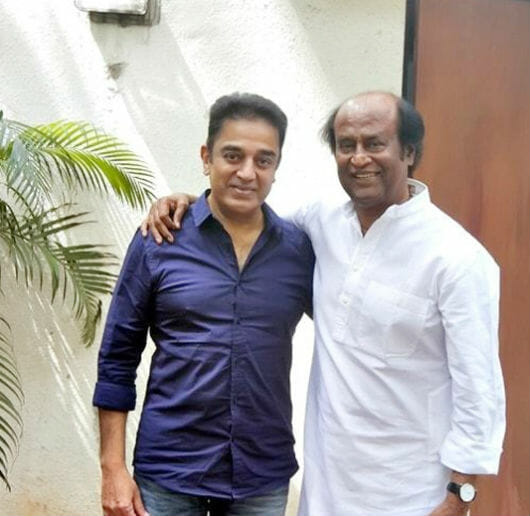 “Congratulations, Superstar.Rajinikanth for the NTR National award in 2016. Thank you Andhra for honouring me also, yet again.  I am indebted to your continued support, which started early in my career. Kruthagnyathalu,” Kamal Haasan wrote on Twitter after the Nandi awards were announced today.

To this heartfelt congratulation, Rajinikanth replied, “Thankyou Kamal… I wish you the same!!! Congratulations!” Now if this isn’t regaining of love then what is it?

The Andhra Pradesh Government announced Nandi Awards winners list for 2014, 2015 and 2016. The NTR National Award for the year 2014 was awarded to actor Kamal Haasan, while Rajinikanth got the same award for 2016.
Rajinikanth acknowledged his win at the Nandi Awards through his Twitter feed, by saying, “I convey my heartfelt thanks and happiness for the prestigious #NandiAwards granted to me.”

Kamal Haasan is all set to launch his political party and he said that he will set out for a tour of Tamil Nadu in order to know the people before officially entering politics.