It is not very often in Tamil cinema you get a multi starrer flick. Hence, whenever the rare phenomenon happens, it never fails to get the attention of the cinephiles in the state. And it is for the very same reason why the anticipation level for Vaanam Kottattum was so high. Also, to add to that eagerness came in the news that the film was originally meant to be directed by auteur Mani Ratnam and he has worked on the script along with director Dhana Sekaran. Another special thing about Vaanam Kottattum is that the current sensational singer Sid Sriram has registered his name in the music director column through this drama. With setting everything that is necessary for the film in the right direction did film maker Dhana Sekaran manage to cook a complete entertainer? Let us get in to the review. 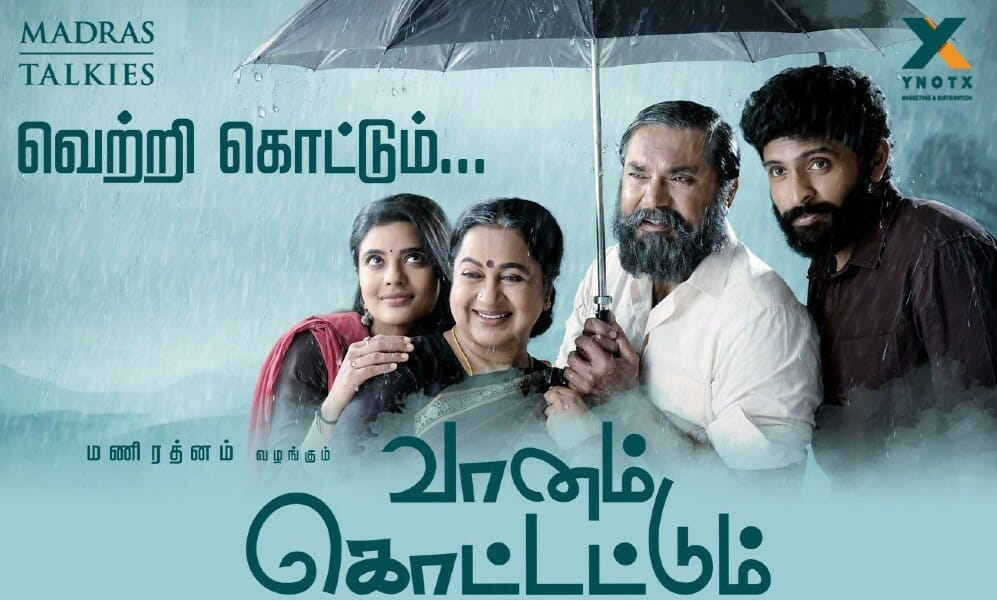 The film is set at the backdrop of Theni, it opens with Velsamy (Balaji Sakthivel) being violently attacked by a couple of people. He runs to seek help from his brother Bose (Sarath Kumar). His niece sees him with a sickle clinging at the back of him. The moment he sees his uncle in this condition he sprints to convey this to his dad. Hearing what had happened, without any forethought filled with high rage, Bose sets off to give it back to the people who are behind his brother. In rage, he hacks two of the men who were responsible for attacking his brother, to death. This impulsive action twirls him from a banana farmer to a murder and puts him behind the bars. Now he has to serve a period of more than a decade in prison.

Fearing that her children would have to face the repercussions of the violent act committed by her husband, Bose’s wife Chandra decides to leave the village. She relocates to Chennai along with her kids Selva (Vikram Prabhu) and Mangala (Aishwarya Rajesh). Years later Selva grows up to be a banana dealer while his sister Mangala is a law aspirant. Selva is in a relationship with Preetha (Madonna Sebastian) a rich girl with a lot of problems due to her absent father. On the other hand, Mangala dates her friend (Shanthanu Bhagyaraj) while one of her other friends (Amitash) also has feelings for her.

Meanwhile, after serving his sentence Bose returns to Chennai to live with his family. But unlike he had expected his arrival in to the family does not have a good reception. When Bhaskar (Nandha Durairaj), the son of whom Bose hacked to death returns to settle scores with Bose, things further goes haywire. Will Bose’s family accept him back in to the family, what will happen of Bose and his family, will Bhaskar  settle his scores, is what makes the rest of the flick.

Vaanam Kottattum is a cluster of stars put together with an intension to deliver a poignant family drama. But director Dhana Sekaran gets diverted from that flow half way through the flick. He rather tries to explore the personal relationships instead of exploring the tension and conflicts created within the family by the entry of an accused father in to the family nearly after a decade. Instead of dealing with the uncomfortable arguments that would arise within the family, he comfortably moves to depicting the romantic lives of his lead characters. Also, certain characters in the drama are underdeveloped and do not have any impact on the script. On the brighter side, the special bond shared by the family members especially the one shared between the brother and sister, and their affable moments with their uncle, and the one between the husband and wife are definitely things to relish. The roguish nature on which he has chosen to build the love tracks brings in the Mani Ratnam’s aura.

Acting as the moral fiber of the entertainer, actors Sarath Kumar and Raadhika Sarath Kumar lead from the front and put on a show with their experience. Actor Vikram Prabhu shines with his mature performance quietly. Actress Aishwarya Rajesh has bagged an interesting role, contrast to the one she played in Namma Veettu Pillai, and has delivered a fine performance as usual. Actor Balaji Sakthivel has given his best in the limited screen time allotted to him. Actors Madonna Sebastian, Shanthanu Bhagyaraj, Nandha Durairaj, and Amitash are casted in a not much to do characters but have done their part well in the roles offered to them.

On the technical front, musician Sid Sriram makes a stunning mark in his debut as his background scores are equally good as his vibrant voice. Cinematographer Preetha Jayaraman’s frames are fresh and set at few selectively fine angles. Seems like a good find and someone to lookout for in future. Preetha Jayaraman’s work has been well complimented by editor E. Sangathamizhan’s cuts.

On the whole, despite top notch technical team and fine set of actors delivering their best, Vaanam Kottattum could not cross line as an engaging and poignant family drama.