Actress Sunainaa ventured into K-town with the psychotic romance action film Kadhalil Vizhunthen which hit the screens back in the year 2008 under the direction of film maker P. V. Prasath with actor Nakul in the lead. The musical album of the flick topped the musical charts that year. It aided in capturing the attention of teen crowd in the state which made actress Sunainaa popular right away. The actress backed her debut success by inking her signature for several noteworthy movies like Yaathumagi, Vamsam, Neerparavai, and Sillu Karupatti. By doing so she has earned a reputation in choosing her flicks. Now, the actress is gearing up for the release of her next drama titled Regina. The entertainer which went on floor a couple of months back with a pooja ceremony in Udumalpet, Tiruppur has been wrapped up and is in the post production stage. Now, the production house has dropped the first look poster of the film with an important announcement.

The production unit has planned for a pan India release of Regina in languages Tamil, Telugu, Malayalam, and Hindi languages. The actress herself has shared the poster of the flick along with the news on social media. Taking to her official twitter account the actress shared the poster of the flick, and wrote, “Presenting the official first look of Regina. Directed by Domin DSilva. Produced and music composed by Sathish Nair. Releasing in Tamil, Telugu, Malayalam, and Hindi.” Here is the post made by the actress. 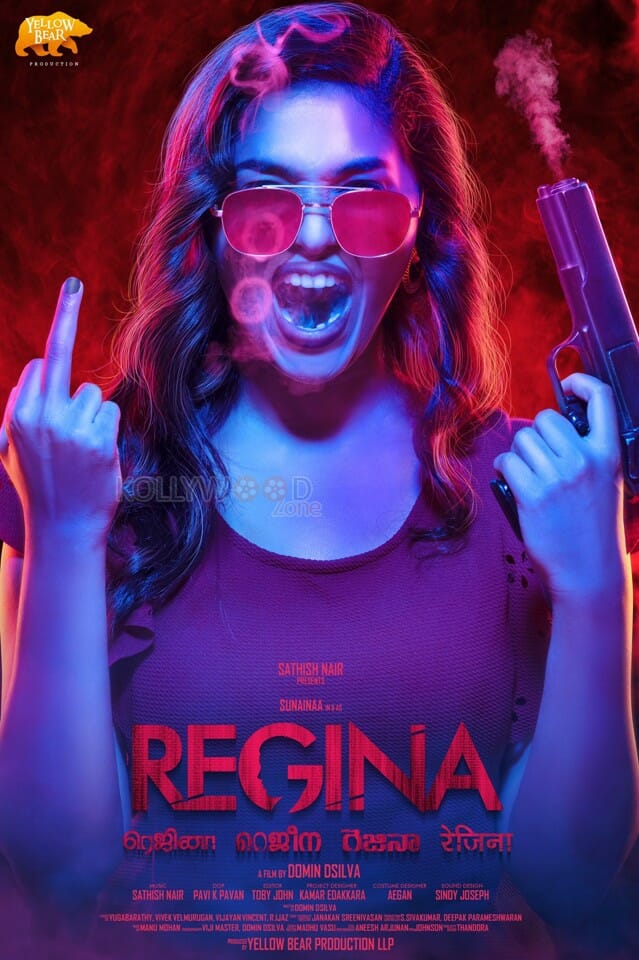 Malayalam film maker Domin DSilva will be foraying into Tamil cinema with the movie. In a chat with a leading media house about the project, the storyteller stated, “Regina is a revenge thriller. The story of the flick is about a housewife who is put in a tight spot, and her metamorphosis into becoming a robust character for her survival. I am sure the audience will enjoy it.” Speaking on producing the drama, producer, and music director Sathish Nair, stated that he had made a collection of independent albums earlier, and felt that it would be great to use them in feature films to reach more audiences. And that is when his meeting with director Domin DSilva happened, who happened to be looking for a producer, and since he found the script to be interesting, he decided to bankroll it.

The venture has been shot in, and around the neighborhood of Pollachi and Varkala. Music director Sathish Nair has composed the music for the film. Cinematographer Pavan K Pavan has been behind the camera for the drama. The editing department of the entertainer has been handed over to editor Tony John. The flick is produced by Sathish Nair under his production house Yellow Bear Production LLP.

On the work front, actress Sunainaa who was last seen on screens in Tamil cinema last year in Trip is currently busy shooting for her upcoming project titled Laththi which is helmed by filmmaker A. Vinoth Kumar in which she will be seen alongside actor Vishal. Apart from this project, the Kadhalil Vizhunthen actress has her long-delayed venture christened Eriyum Kannadi under the directorial of story teller R. Kannan in which she has teamed up with actor Nakul for the third time after Kadhalil Vizhunthen, and Maasilamani, in her pipeline waiting for release.