Tamil cinema audiences are starting to enjoy the black comedy genre. Filmmaker Vignesh Shivan instigated the black comedy trend with his film Naanum Rowdydhaan. Director Nelson Dilipkumar is trying to build a reputation in it. Beast is about an ex RAW officer who is inside a mall that is hijacked by terrorists and his single-handed effort to rescue them. So, how has the flick come out? Is it solid enough to beat the box office records set by previous ventures of actor Vijay and will director Nelson Dilipkumar’s winning streak continue? To know that let us get into the movie review. 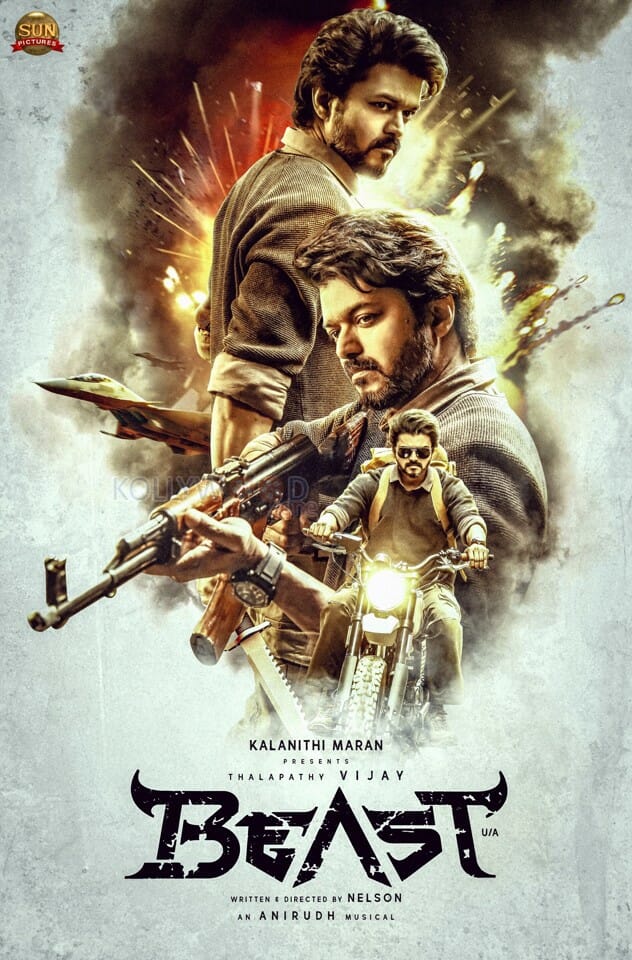 The film tells the tale of Veera Raghavan (Vijay), a RAW officer who is in Kashmir on a mission to capture the most wanted terrorist Umar Farooq. When the day to execute the mission arrives, at the last moment his department pulls out from the mission and orders him to quit it. How can you ask a mass hero to drop a mission, no? He overrides his higher official’s decree and instead gives them instructions to clear the civilians in the nearby perimeter to avoid collateral damages during the mission. He takes his motorbike; with a thumping background score he goes all alone like a brave soldier to the spot where Umar Farooq is staying. He gets to a building nearby, trashes the terrorists guarding the place in style and sets up the Bazooka. Before firing it, he asks for a confirmation whether the place is free of civilians. The officer on the other end lies, Veera Raghavan fires his shot at Umar Farooq’s convoy that is ready to deport him to another nation. Umar Farooq is captured and sent to jail. But the shot he fired claims the life of a kid.

Veera Raghavan gets dejected and quits his job. Eleven months forward, he is dealing with PTSD and is in therapy. In the meantime, he meets Preethi (Pooja Hegde) and falls in love with her in a bizarre fashion. She tries to get him a job and takes him to her boss Dominic Irudhayaraj (VTV Ganesh) who runs a security firm. After a brief and comical interview, Dominic Irudhayaraj is impressed with the might of Veera Raghavan and hires him. On a contract issue he takes him to the East coast mall. The government of Tamil Nadu receives info from intelligence that terrorist have planned for a hijack mission in the state. Meanwhile, the moment Veera Raghavan enters the mall he notices the watchman in a head down position, and begins to take note of every activity in the mall, and suspects foul play. Before he could react, the terrorists take control of the mall. Veera Raghavan yet again takes on a single man mission, puts his military skills to full use, to save the hostages. How he does it in style in what makes the rest of the flick.

Just like his previous ventures Kolamavu Kokila, and Doctor, director Nelson Dilipkumar tries to exploit black comedy to maximum. His previous dramas succeeded because they had a story that moved the film. But in Beast he aims to entirely cash in on actor Vijay’s star power. And to be fair, has succeeded in doing it to an extent. Black comedy can be very effective in holding the attention of the audience when the situations are set right. But that joy is deprived from us, as director Nelson Dilipkumar has indulged in lazy writing. We do not see any effort made to stage situations – except for the serious backdrop of the hostage situation – rather just on the flow he drops comical one-liners and draws funny expressions from his artists to keep the audience invested. How long can an entertainer that is two and a half hours long run on this mechanism? This is the Achilles’ heel of Beast.

Usually, in Nelson Dilipkumar’s films the characters are vulnerable and operate in a team to achieve their target. Here all we see in the invincible lead character who could show his swag amidst raining bullets. Yes, you guessed it right, not one has the audacity to touch him. One could not feel the challenge involved in trying to save a crowd of hostages from the terrorists. Initially the head terrorist looks menacing and shows off like a competent competitor but in the end seem like an individual with the IQ of that of a sloth. It is grandiose without relevance in Beast. There is a mini ‘Fast & Furious 7 car jump between Abu Dhabi Skyscrapers’ scene in Beast that is choreographed within the mall. Then, towards the end Veera Raghavan again goes on a one-man army mission into Pakistan. It seems like storyteller Nelson Dilipkumar had no clue, just as the audience was leaving the theater, when he penned the script of Beast.

Actor Vijay looks robust and chic. It is his presence that keeps us hooked to the drama to a large extent. Actress Pooja Hegde in another typical Tamil cinema’s meek heroine role. Actor Selvaraghavan makes his presence felt. Actor Ankur Ajit Vikal is menacing and fits his role perfectly. Comedians Yogi Babu, and Redin Kingsley do not serve their purpose but it is their poorly written character that is to blame. Comedian Sathish Krishnan tries hard to evoke laughter but just end up being annoying. Comedian VTV Ganesh makes us laugh inconsistently. Actor Shine Tom Chacko is effective. Actress Aparna Das is functional. Actor Shaji Chen is adequate. The rest of the cast has delivered what was asked of them.

On the technical front, musician Anirudh Ravichander’s tracks are a saving grace. His numbers ‘Arabic Kuthu’ and ‘Jolly O Gymkhana,’ light up the mood. Even his background score does aid in elevating the mass moments. Cinematographer Manoj Paramahamsa has done a fine job covering the entertainer. His angles add value to the film. Editor R. Nirmal has enhanced the work of his colleague with his sharp cuts.

On the whole, actor Vijay puts on a one man show but there is only so much an actor could do to save a flick that is so little in substance.