Maiden Director Arunraja Kamaraj gives us a movie on the difficulties faced by farmers in Tamil Nadu against the background of a sports film. It is about a village girl who becomes a cricketer against all odds and the movie even has elements about gender equality.

‘Kanaa’ is all about Kousalya (Aishwarya Rajesh) who dreams of becoming a cricketer to make her country proud and also to put a smile on her father Murugesan’s (Sathyaraj) face. As a small kid, she sees that her father is an avid cricket fan who sheds tears after the Indian team loses the match but he was least bothered about the death of his father. 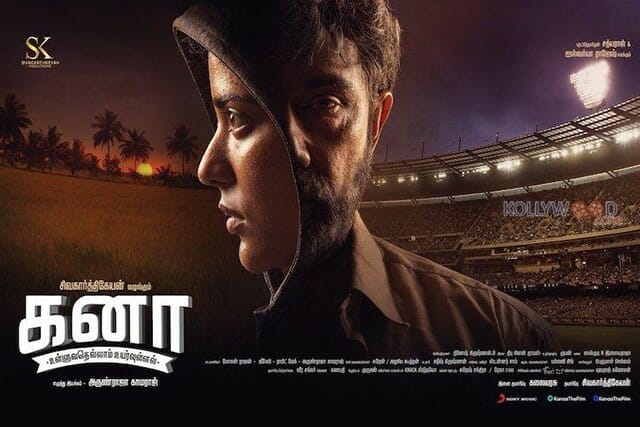 This incident inspires Kousalya to become a cricketer and being a village girl she faces a lot of difficulties, including an insecure mother who strongly believes that her daughter’s life will be spoiled if she plays cricket along with some young boys and the family’s reputation will get smeared. Murugesan who is a zealous farmer has his own share of struggles and problems. Though the banks were initially willing to grant him loans, they slowly start pestering him after the drought in the delta region and poor result from the fields make it hard for him to repay the money. How the father and daughter duo overcomes the problems in their respective professions is the essence of the film.

The screenplay of director gives equal importance to farmers and cricket. The first half of the movie is filled with many interesting elements and even the intermission piques up our curiosity on what happens next?

The second half is slightly slower as it falls into the usual sports drama. All the characters that you see in the film are stereotypical. Siva Karthikeyan plays the role of Nelson Dilipkumar, a former Indian cricketer who lost an eye in an important match and is now the new coach for Indian Women Cricket Team. He also motivates Kausi to achieve her dream.

Director Arunraja Kamaraj packs a punch with his dialogues like ‘Intha Ulagam Jeichruvenu Sonna Kekathu… Aana Jeichavan Sonna Kekkum’. The film has its own setbacks like it goes into the moralistic mode very often. The movie completely belongs to Aishwarya Rajesh. Her natural and dedicated acting makes you root for her reel character. Sathyaraj has lived his character and the debut actor Darshan has very less scope in the film as the love interest of Kousalya. The rest of the cast is perfect. The girl who portrayed the teenage version of Aishwarya is exceptional with her raw acting skills which helps us to connect well with the movie.

The music composed by Dhibu Ninan Thomas is a huge plus for the film. His two motivational songs ‘Oonjala Oonjala’ and ‘Savaal’ makes the second half of the film interesting. On the whole, ‘Kanaa’ has a predictable storyline and you can easily deduce the climax, but is surely a good film to watch this holiday season.